Some of the best real-time insights into Tesla and its global fleet of electric vehicles — outside the confines of its Silicon Valley headquarters — might be through the lens of TezLab, a tiny upstart in Brooklyn.

Now, a little more than two years after its founding, TezLab is on the verge of hitting what its founders believe is a tipping point of users, a milestone that could finally trigger a path to monetization. And it’s adding lots of new features to help accelerate that plan.

For the non-Tesla owner, the name TezLab is likely a foreign one. In certain circles though, namely Tesla owners obsessed with understanding how their electric vehicle performs, TezLab is a familiar friend.

Tezlab is a free app that’s like a Fitbit for a Tesla vehicle. Tesla owners who download the app can track their efficiency, total trip miles and use it to control certain functions of the vehicle, such as locking and unlocking the doors and heating and air conditioning. There’s even a gamification piece that lets users earn badges for hitting milestones or completing tasks. 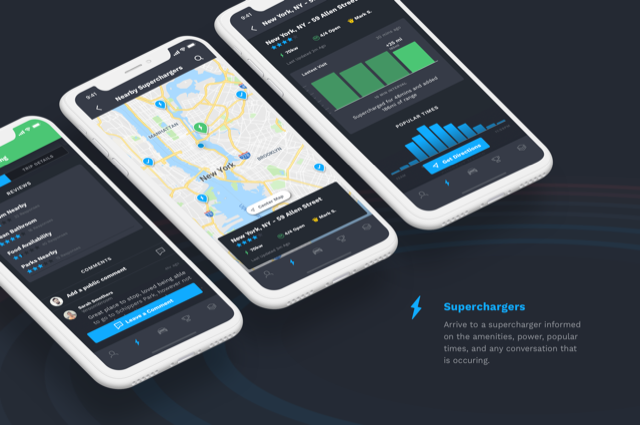 The company has started to add new features as part of a longer term plan aimed at monetization.

One of these features, which crowdsources data like Waze to give insights and ratings on Tesla Supercharger stations, is rolling out now. The video below shows how this supercharger feature will function.

The Waze for supercharger feature is considered “phase one” of the company’s plans to broaden its crowdsourcing and social community.

The six-person team behind TezLab was born out of HappyFunCorp, a software engineering shop that builds apps for mobile, web, wearables and Internet of Things devices for clients that include Amazon, Facebook and Twitter, as well as an array of startups.

HFC’s engineers, including co-founders Ben Schippers and William Schenk, were attracted to Tesla largely because of its techcentric approach and one important detail: the Tesla API endpoints are accessible to outsiders.

The Tesla API is technically private. But it exists, allowing Tesla’s own first-party app to communicate with the cars to do things like read battery charge status and lock doors. When reverse-engineered, it’s possible for a third-party app to communicate directly with the API. (Tesla CEO Elon Musk has talked recently about opening up the API to third-party developers)

“Essentially, the plumbing is already built to connect to the server,” Schippers told TechCrunch recently. “This was the catalyst for us.”

A Tesla vehicle buying trend was triggered at HFC. Schippers, Schenk and a number of other software engineers and staffers at HFC bought, and still own, Tesla vehicles like the Model 3. The company’s HFC fund provided the initial $350,000 to build the first version of TezLab.

TezLab hasn’t captured anywhere near every Tesla owner. But Schippers believes they’re getting close to reaching a critical mass of users. More than 200 owners are downloading the app each week, and that rate is accelerating, he said.

TezLab has 16,000 total installs on the Apple App Store and Google Play, according to Sensor Tower. The figures are all unique, new installs. The firm doesn’t count re-installs or downloads to multiple devices belonging to the same user. However, that total install number is likely closer to 18,000 because many are listed under TestFlight, an online service used to test apps.

In comparison, Tesla delivered 245,506 vehicles globally in 2018. TezLab doesn’t expect every Tesla owner to download the app. Instead, Schippers is initially aiming for 10% of owners — a target he believes is within reach — and eventually higher.

Even at its current numbers, TezLab has become a massive repository of Tesla data. The company is storing between 850,000 to 1 million events a day, and that volume is growing. That translates to more than 1 GB of data a day, according to Schippers.

“We now have enough data in our system to start making large assumptions of what the fleet is doing and why,” said Schippers, who is CEO of HappyFunCorp and head of product at TezLab. 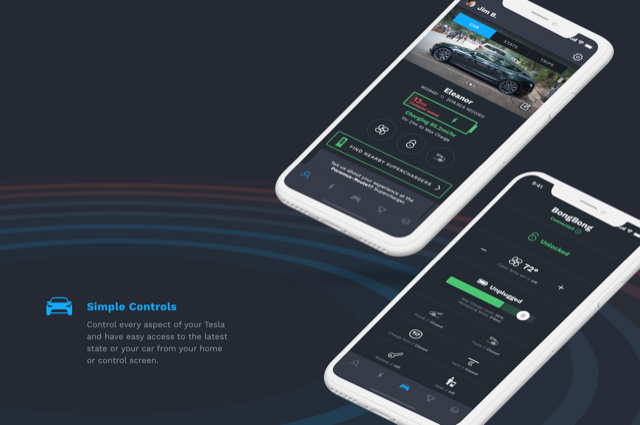 The data is aggregated and anonymous and isn’t shared publicly. And there are no plans to sell that data.

“I think we can create something really meaningful, without getting into the business of selling data,” Schippers told TechCrunch.

Of course, what Schippers and others at TezLab have built could, theoretically, end overnight if Tesla were to change access.

Tesla could do to us what Facebook did to Zynga, and we don’t want that,” Schippers said.

What TezLab does provide publicly on its website are insights based on that crunched data. For instance, anyone visiting the site can get a breakdown of model ownership, the average trip length and average time between plugging in.

As the company adds more features to the app, an understanding of how people use their Tesla vehicles should deepen.

In the background, of course, TezLab knows more than what it shows on its website. It can quickly spot phantom drain issues, if the Tesla API goes offline or chart spikes in charging use. For instance, Tezlab was able to determine that visits to Tesla Supercharger stations were 84% higher on Memorial Day than on an average day in 2019.

Capturing and storing that data is at the core of TezLab’s plan to make money. The app will remain free even as more features are added.

The company plans to follow the business model of the social fitness network Strava,  which is charge for storage, not features. That data could become a lot more valuable to owners as new features are added. TezLab is looking at tracking Autopilot miles and is looking into doing “interesting stuff with Sentry mode,” the security feature now live in Tesla vehicles.

This summer, the app will introduce clubs that Schippers hopes will build up the community. The feature will let Tesla owners join a specific club, say in Norway, Brooklyn or San Francisco. It will be designed so owners can easily find and converse with other owners. And Schippers added, only people who own Tesla are allowed in.

TezLab’s staff puts itself squarely in the “protector of the realm” category when it comes to Tesla. In the end, all of this is to help Tesla succeed, said Schippers.

“We look at what Fitbit did for walking and exercise and motivation,” he said. “And we’ll bring that to the space of electric vehicles.”