This year’s edition of Mary Meeker’s Internet Trends report, released earlier today, once again included a section on China prepared by Hillhouse Capital. There are now 3.8 billion Internet users globally, more than half of the world’s population, but growth is slowing (as demonstrated by declining smartphone shipments). Internet leaders in China can continue helping companies in other countries find ways to engage their users, the way WeChat launched features, including mini-programs and e-commerce, that are now ubiquitous in messaging and social media apps around the world.

China has the most internet users in the world, about 800,000,000 or 21% of the world’s total internet users (it is followed by India, the United States and Indonesia). Chinese companies took seven of the top 30 spots for internet market cap leaders: Alibaba, Tencent, Meituan Dianping, JD.com, Baidu, NetEase and Xiaomi—stable, just one less than one year.

Mobile Internet users in China grew 9% year-over-year in 2018 to 817 million, while mobile data usage increased 189% year-over-year, faster than 2017’s 162% growth. While data volume share (or new data captured, generated and replicated by region) is falling in the U.S., it is rising in China, second in growth only to EMEA (Europe, the Middle East and Africa). 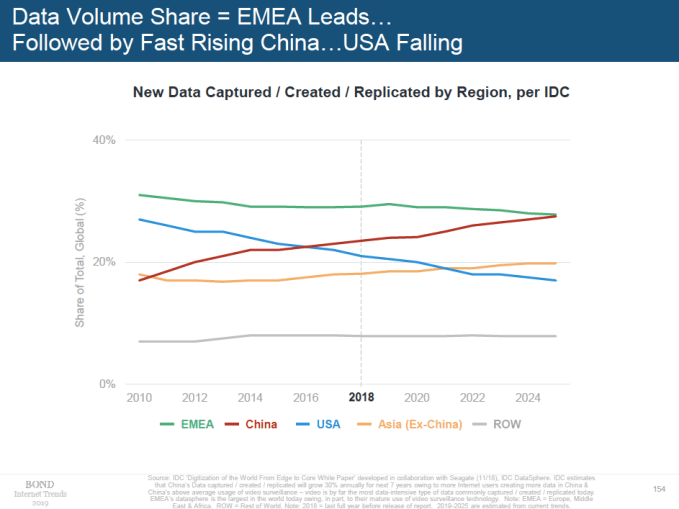 In particular, this year’s report highlighted short-form videos as a key driver of Internet usage growth in China, leading user and usage growth across all app categories. Users spent a total of nearly 600 million hours per day watching short-form videos on mobile in April 2019, more than in any other category. Short-form video leaders included Douyin (known as Tik Tok in international markets), Kuaishou and Haokan. 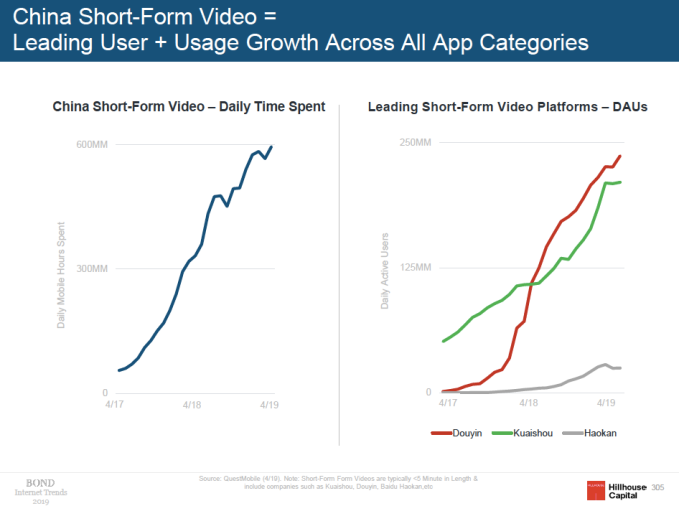 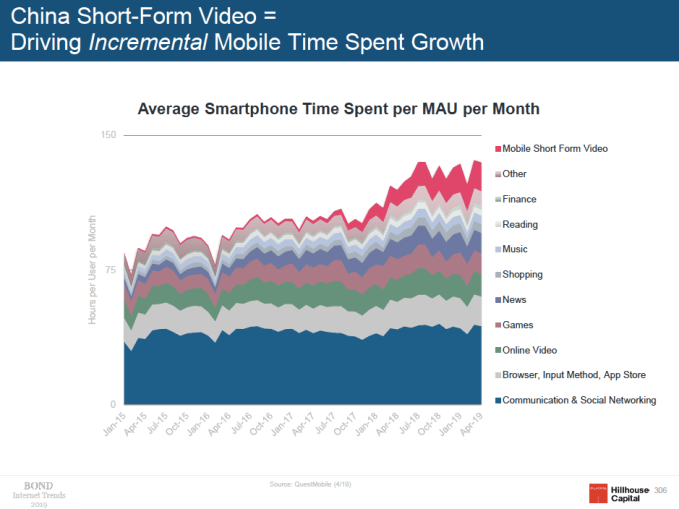 Another major video trend is live-streaming, especially for e-commerce platforms. Taobao got more than $14 billion GMV through live-streaming in 2018, while fashion e-commerce and social media platform Mogu attributed 24% of its GMV to live-streaming, which also had a four times repeat purchase rate.

While WeChat’s mini-programs have already influenced other apps like Instagram, WhatsApp, Kakao and Line, there is still plenty to learn from them. For example, the role they play as CRMs for many Chinese retailers: many brands send information about sales and other promotions by public accounts on WeChat or send red packets for discounts to group chats to drive engagement.

The rise of the “super app”

Alipay has also evolved from a payments app to hosting more than 200,000 mini-programs, including ones that enable users to manage their healthcare, investments, invoices, car payments and insurance. Alipay now counts more than one billion users, 70% of whom use at least three financial services in the app.

The influence of these “super apps” can be seen outside of China in apps like Grab, Rappi and Uber, which are adding more services (for example, Uber’s app now lets you order food, reserve e-bikes and find promotions at other businesses).

From offline to online 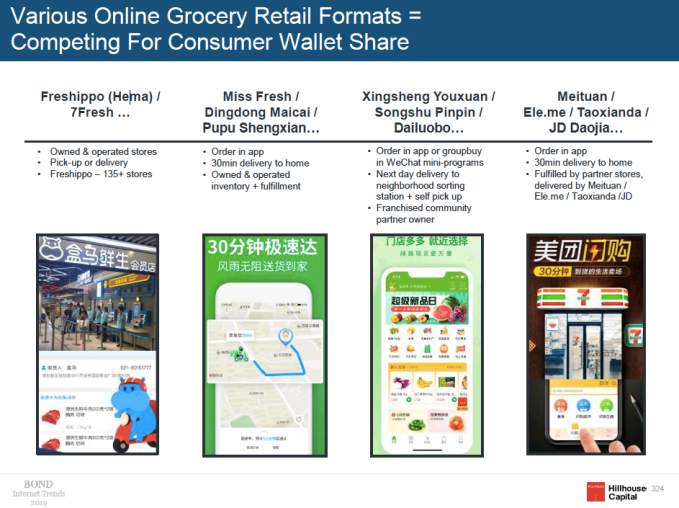 Another trend that may make its way to other countries is the wide variety of business models used by grocery delivery apps in China. In the U.S., most grocery delivery apps take one of two approaches, either partnering with retailers and delivering groceries from their brick-and-mortar stores to users (like Instacart) or delivering from their own stores or warehouses, like Amazon Prime Now and Whole Foods.

In China, on the other hand, grocery delivery apps are divided into four business models. Some, like Alibaba’s Freshippo (Hema) and JD.com’s 7 Fresh, own, operate and offer delivery or pickup from their own stores, while others like Miss Fresh and Dindong Maicai, deliver from their own warehouses, using their own fulfillment systems. A third group, including Xingsheng Youxuan, Songshu Pinpin and Dailubo, works with local franchised partners and allows users to order or make group purchases in WeChat mini-programs for next-day delivery or pick up. The fourth group offers quick deliveries from retail partners and includes big companies like Meituan, Alibaba’s Ele.me and Taoxianda, and JD.

Riding the same offline-to-online wave, educators are digitizing classes that were traditionally taught in person. Online tutoring has hit the mainstream as K-12 students embrace homework apps to get afterschool help. Similarly, parents sign their younger children (ages 3-10) up for English and coding classes hosted on smartphones.

The Chinese government has also gone digital and is increasingly offering public services through in-house apps and third-party super apps such as WeChat and Alipay. The list of tasks that citizens can complete on their phones includes applying for visas, paying utility bills, virtually queuing up at hospitals, renewing a driver’s license, and many more that can save people the hassle of hopping from one government office to another.