Sometimes a person (I’m not naming names here) tires of staring at startup funding data, and her hungry mind wanders to pizza.

But ordering a pizza in real life isn’t always the best choice for such people/reporters. So instead, we’ll pivot to the next best (not really) thing: Looking at what startup investors are doing vis-à-vis the pizza industry.

Turns out, VCs and growth investors are finding lots of ways to toss money at the space. A query of Crunchbase data rolled out more than 50 companies funded in the past couple of years that mention pizza in their business descriptions. In the chart below, we slice into 10 of the most heavily funded and intriguing pizza-preneurs. 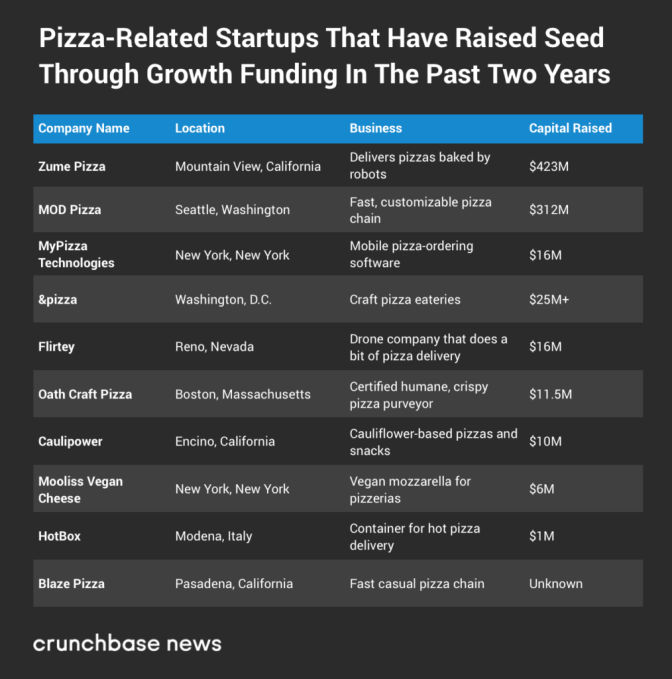 Taken together, what does this assimilation of funding data portend about the future of pizza? We’re not experts in much but consuming the stuff, but nonetheless, a few trends stand out. We outline them below.

Many top-funded startups appear to be tackling what’s long been the Achilles heel of the pizza-industrial complex: The inverse correlation between convenience and quality.

It is a persistent conundrum. You can have pizza right away that costs very little, but it tastes like microwaved cardboard. Or you can pay the going rate and wait for a fresh pie, but that involves…well, paying and waiting.

Of course, there are all manner of variations in-between: the upscale frozen pizza, the merely adequate chain pizza, the quick, greasy slice — the list goes on. Consumers seemingly have no shortage of options. And yet we long for more.

The most heavily funded pizza startups appear to target a similar consumer desire. We want a cheap, fast, custom, fresh pizza that tastes good. MOD Pizza and LeBron James-backed Blaze Pizza are two fast-growing chains with this approach. Both serve fast-cooking thin-crust pies with a wide choice of toppings for a flat price.

Meanwhile, Silicon Valley-based Zume has raised more than $400 million to scale up a model that relies on robot-equipped mobile kitchens to bake fresh pies and deliver them to hungry customers. By cutting the cost of a retail space and automating much of the baking process, Zume is betting it can provide a tasty, fresh pie more cheaply than the competition.

Most of us do not consume pizza for its health benefits. Nonetheless, there are ways to make pies less fattening, more nutrient-dense or vegan-friendly.

Startups and their backers are on to this. Case in point: Caulipower, an Encino, Calif.-based startup that makes cauliflower-based pizzas and other snacks. The two-year-old company has raised just over $10 million in early-stage funding to date.

For the vegan crowd, there’s Mooliss Vegan Cheese, a startup that sells plant-based mozzarella exclusively to pizzerias and restaurants. The New York company raised $6 million in May to get more people hooked on its coconut oil- and cashew-based cheeses.

For those who prefer to patronize a beloved local pizzeria, startups have tackled that angle as well, with tools aimed at making existing pie shops thrive in the digital, on-demand age.

On this front, MyPizza Technologies, best known as the developer of the app Slice, has raised around $16 million in funding to date. Its app helps local pizza shops and their customers submit and fulfill mobile orders and payments.

Another upstart, HotBox, is focused on the hot-delivery side. The Modena, Italy company has developed a delivery box that keeps pizza hot and crunchy for the journey from shop to customer.

Takeaway: we will eat more pizza

Throwing money at the pizza space could be seen as a source of disruption — displacing existing players and supply and delivery chains.

However, the disruption should be contained if something that seems both impossible and inevitable does come to pass: We all eat more pizza.

Personally, I see a strong likelihood for increased consumption, as pizza becomes something to fill more niches. In addition to serving as a greasy, cheesy treat, pizza now also works as a semi-healthy fast casual meal option, a decadent gourmet indulgence or even a vegan snack.

Most of this does not bode well for our waistlines. But it might work out profitably for pizza-preneurs and their backers.