We are very pleased to announce that the new and improved Crunchbase Unicorn Leaderboard re-launched today after nearly a year’s absence from TechCrunch.

Venture investors did a lot of handwringing in the past year over rising valuations, but that did not slow the unicorn juggernaut, as 2018 outstripped all previous years in terms of the number of unicorns created and venture dollars invested. Indeed, 151 new unicorns joined the list in 2018 (compared to 96 in 2017), and investors poured more than $135 billion into those companies, a 52% increase year over year and the biggest sum invested in unicorns in any one year since unicorns became a thing.

Back in 2013, Cowboy Ventures’ Aileen Lee coined the term “unicorn” in a piece on TechCrunch with her report stating “39 companies belong to what we call the ‘Unicorn Club’ with four unicorns born per year in the past decade, … with Facebook being the breakout ‘super-unicorn’ (worth >$100 billion).” A lot has changed in six years. 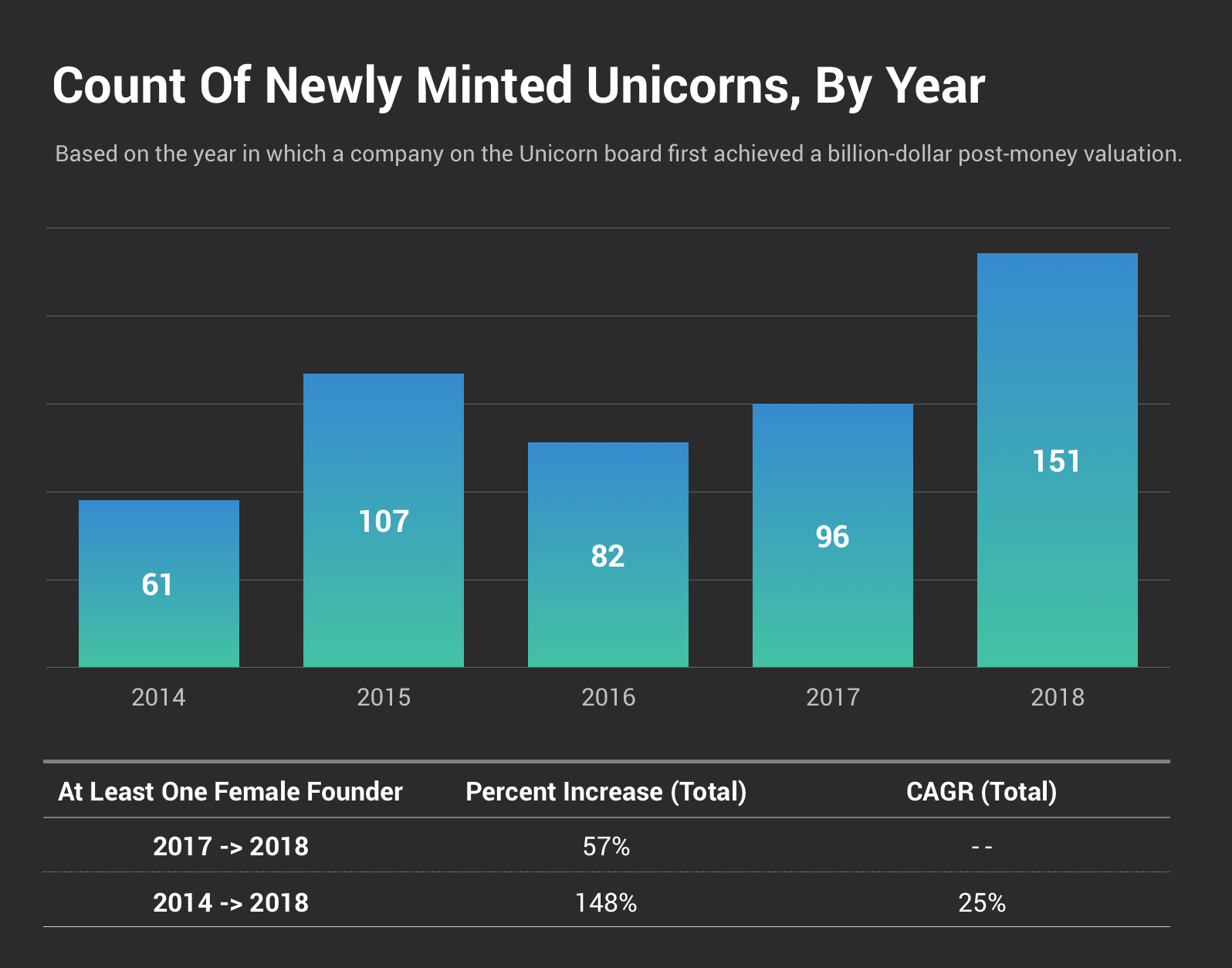 From 19 new unicorns in 2013, roughly two each month, we now see a new unicorn coming into being every two working days. In 2019 so far, 42 new unicorns have joined the unicorn leaderboard, and by next week that number will have jumped again.

The Unicorn Leaderboard now lists 452 companies, which have collectively raised $345 billion and represent a cumulative valuation of $1.6 trillion. Go back to February 2018 and there were just 279 companies, with $206 billion raised and valued at $1 trillion. In just 15 months 170+ companies reached unicorn status, raised $140 billion more and added $600 billion in company valuations.

View by investor, sector and country

On the new leaderboard, it’s possible to filter by investor, lead investor, market sector and country. The unicorn leaders are the U.S. with 196 companies, China with 165, India with 19 and the U.K. with 12.

Three well-known venture firms, Sequoia Capital, Accel and Andreessen Horowitz, have invested in the most unicorn rounds. The investors that actually led the most rounds are corporate investor Tencent Holdings, venture firm Sequoia Capital and private equity firm Tiger Global Management. The rise of Tencent Holdings and Tiger Global Management reflect the prominence of China-based unicorns, as well as the increase in investment from corporate and alternative investors. 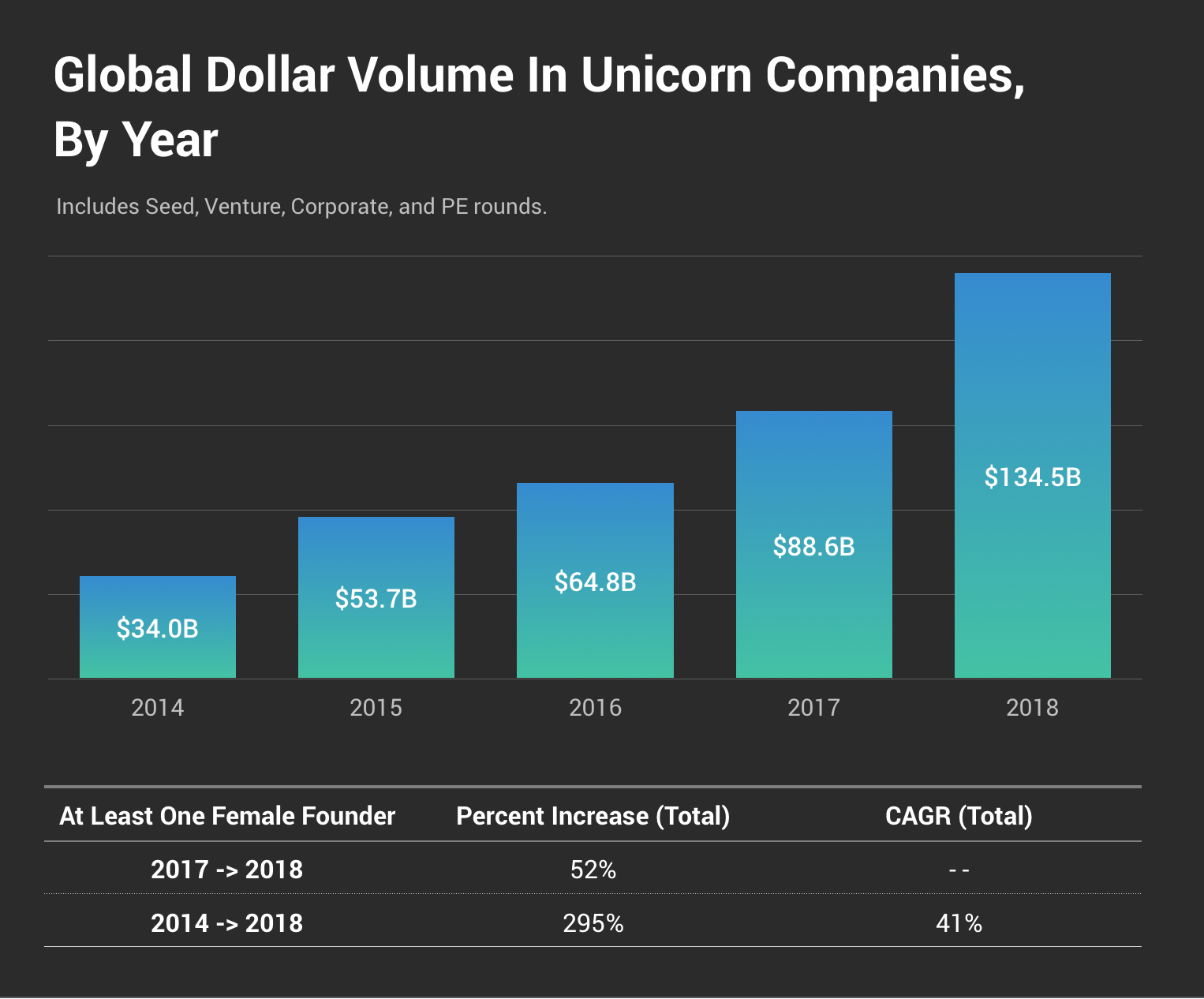 The leaderboard also hosts a list of companies that have disclosed valuations between $500 million and > $1 billion and may well reach unicorn status with their next capital raise, unless, of course, they exit before then.

The majority of these 452 companies are in the U.S. or China, and most will plan to exit (go public or get acquired) within the next five to eight years.

More than a one-third of all unicorn exits took place in 2018. The exited unicorns section of the Crunchbase Leaderboard lists 144 companies; roughly two-thirds of these companies (98) went public and the balance (46) were acquired.

2018 might well be the peak, but 2019 is still strong, with 42 new unicorns announced this year so far, and $33.6 billion invested in this cohort of private companies. With the record of 452 unicorns, $345 billion currently invested, $1.6 trillion in captured value and an average age of 8.2 years since being founded, 2019 will be the year we watch the IPO market closely.

Credit: Steven Rossi who manages the board, Santosh Ankola on the TechCrunch product team and Human Made Design for their work on recreating the board.