Livekick, a startup that gives customers access to one-on-one personal training and yoga from their home (or hotel room, or elsewhere), is announcing that it has raised $3 million in seed funding.

The company was founded by entrepreneur Yarden Tadmor and fitness expert Shayna Schmidt. Tadmor said that with all his travel for work, his fitness routine “really eroded,” so he contacted Schmidt and asked her to train him remotely — they’d connect via FaceTime, he’d mount his phone at the gym and she’d supervise his workout.

“We trained this way for a while, and then we realized: Hey, this is something that other people can really benefit from,” Tadmor said.

So with Livekick, users can sign up for one, two or three live, 30-minute sessions with a remote trainer, who they’ll connect with via the Livekick iOS app or website. (After a two-week trial, pricing starts at $32 per week.) The workouts will be tailored to the space and equipment that you have access to, and the trainers will also assign other workouts for the rest of the week.

Tadmor and Schmidt contrasted this approach with companies like Peloton and Mirror, which are bringing new exercise equipment and classes into the home, but which don’t offer one-on-one interaction with a trainer. Tadmor said this individualized approach is not just better-tailored to each user’s needs, but also more effective at keeping them motivated. And Schmidt said the live interaction also ensures that people are doing their workouts correctly and safely. 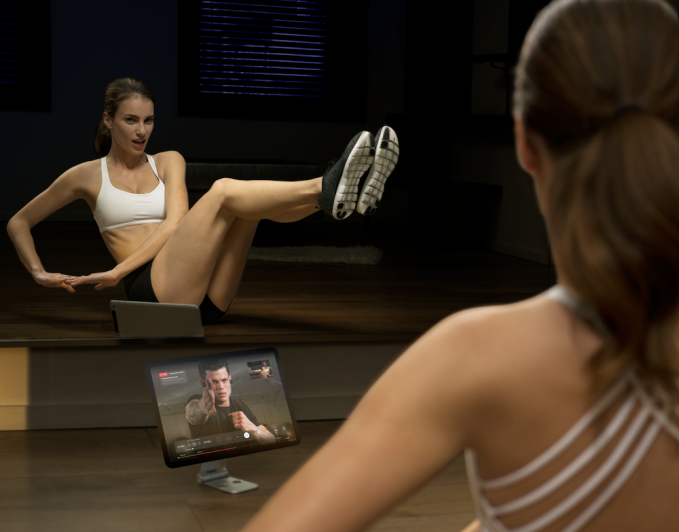 As for the trainers, Schmidt said this gives them a new way to find clients, particularly during their off-hours.

“For trainers, the hours that users are never booked are usually noon to 4pm — they never get a client because people are at work, obviously,” she said. “So we can give trainers in London those hours because for a user in New York, that’s morning. We can really fill their schedules [and] help them make some more income.”

Beyond consumer subscriptions, Livekick also offers a corporate program called Livekick for Work. And just to be clear, the service isn’t just for frequent travelers, as Tadmor noted: “If you live in New York, you have access to a lot of fitness options, but most people don’t. You’ve got to do a lot of commuting to get to a studio with great trainers, and so part of what we’re trying to bring is really let you do that from the comfort of your home.”

And while we recently covered the launch of a similar service called Future, Livekick actually launched in September, and Tadmor said the average retention rate has been over six months.

The round was led by Firstime VC, with participation from Rhodium and Draper Frontier.

“With its leading technology and ethos to make exercise accessible and affordable, we believe Livekick has the capacity to improve the lives and health of millions,” said Firstime’s Nir Tarlovsky in a statement.

Peloton raises $550M at a valuation of $4 billion