Microsoft has selected seven lucky startups to receive grants from its AI for Accessibility program. The growing companies aim to empower people with disabilities to take part in tech and the internet economy, from improving job searches to predicting seizures.

Each of the seven companies receives professional-level Azure AI resources and support, cash to cover the cost of data collection and handling and access to Microsoft’s experts in AI, project management and accessibility.

Companies apply online and a team of accessibility and market experts at Microsoft evaluate them on their potential impact, data policies, feasibility and so on. The five-year, $25 million program started in 2018, and evaluation is a rolling process with grants coming out multiple times per year. This one happens to be on Global Accessibility Awareness Day. So be aware!

Among this round’s grantees is Our Ability, a company started by John Robinson, who was born without complete limbs, and all his life has faced serious challenges getting and keeping a job. The unemployment rate for people with disabilities is twice that of people without, and some disabilities nearly preclude full-time employment altogether.

Yet there are still opportunities for such people, who are just as likely to have a head for project management or a knack for coding as anyone else — but they can be difficult to find. Robinson is working on a site that connects companies with jobs suited to disabled applicants to likely candidates.

“Our goal is to empower employers to understand and leverage the increasingly valuable employment population of people with disabilities, proven to lower job turnover rates and boost morale and productivity – because a commitment to an inclusive workplace culture begins within,” Robinson wrote in an email to TechCrunch. “Employers have previously been at a disadvantage to accelerate in this regard, because many job-seeking tools are not designed with people with disabilities in mind.” 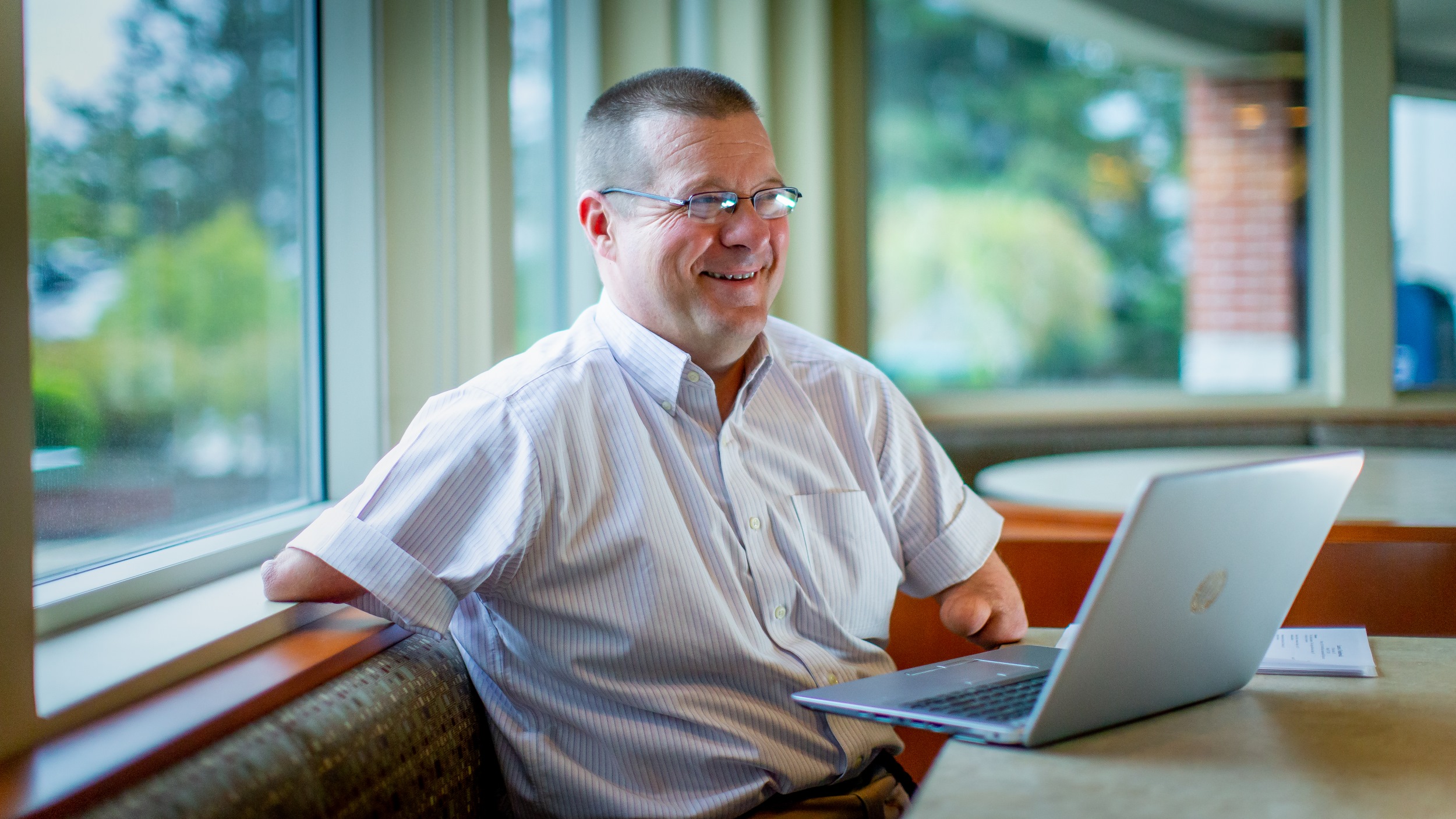 John Robinson of Our Ability

The plan that attracted Microsoft is Robinson’s idea to make a chatbot to help collect critical data from disabled applicants. And before you say “chatbot? What year is this?” remember that while chatbots may be passé for those of us able to navigate forms and websites easily, that’s not the case with people who can’t do so. A chat-based interface is simple and accessible, requiring little on the user’s end except basic text input.

Pison is another grantee whose technology would come in handy here. People with physical disabilities often can’t use a mouse or trackpad the way others do. Founder Dexter Ang saw this happen in person as his late mother’s physical abilities deteriorated under the effects of ALS.

His solution is to use an electromyography armband (you might be familiar with Myo) to detect the limited movements of someone with that type of affliction and convert those into mouse movements. The company was started a couple of years ago and has been undergoing ongoing development and testing among ALS patients, who have shown that they can use the tech successfully after just a few minutes.

Voiceitt is a speech recognition engine that focuses on people with nonstandard voices. Disabilities and events like strokes can make a person’s voice difficult for friends and family to understand, let alone the comparatively picky processes of speech recognition.

Google recently took on this same problem with Project Euphonia, which along with the company’s other efforts towards accessibility was given an impressive amount of stage time at I/O last week.

Here are the remainder of the grantees (descriptions are from Microsoft):

The image up top, by the way, is from iTherapy’s InnerVoice, an app that provides AI-powered descriptions of images taken by kids who have trouble communicating. It’s a great example of cutting-edge tech being applied in a niche that helps a small population a lot rather than a large population a little.

Microsoft has been a good steward of accessibility for years and it seems to be leaning into that, as well it should. President Brad Smith had a lot to say about it in a blog post last year, and the commitment seems strong going into this one.