Indian video streaming giant Hotstar, owned by Disney, today set a new global benchmark for the number of people an OTT service can draw to a live event.

Some 18.6 million users simultaneously tuned into Hotstar’s website and app to watch the deciding game of the 12th edition of the Indian Premier League (IPL) cricket tournament. The streaming giant, which competes with Netflix and Amazon in India, broke its own “global best” 10.3 million concurrent views milestone that it set last year.

Update at 11:30 p.m. Pacific on May 13: In a statement, Hotstar confirmed that 18.6 million users simultaneously watched the game on its platform over the weekend. “The achievements of this season once again bear witness to Hotstar being the most preferred sports destination for the country. With technology as our backbone and our all-round expertise in driving scale, we are confident we will continue to break global records and set new benchmarks with each passing year,” said Varun Narang, chief product officer of Hotstar.

Hotstar topped the 10 million concurrent viewership mark a number of times during this year’s 51-day IPL season. More than 12.7 million viewers huddled to watch an earlier game in the tournament (between Royal Challengers Bangalore and Mumbai Indians), a spokesperson for the four-year-old service said. Hotstar said the cricket series had over 300 million overall viewership, creating a new record for the streamer. (Last year’s IPL clocked a 202 million overall viewership.) 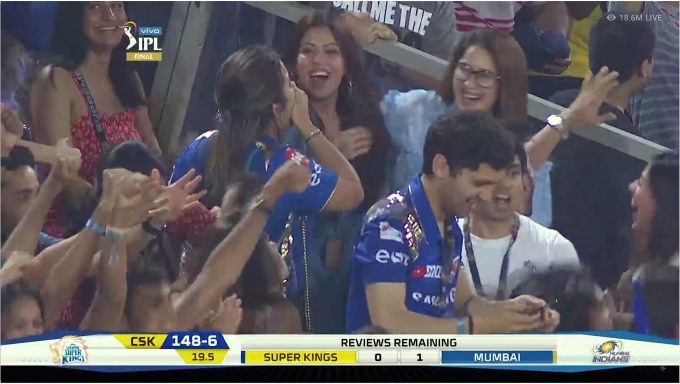 These figures coming out of India, the fastest-growing internet market, are astounding, to say the least. In comparison, a 2012 live stream of skydiver Felix Baumgartner jumping from near-space to the Earth’s surface remains the most concurrently viewed video on YouTube. It amassed about 8 million concurrent viewers. The live viewership of the royal wedding between Prince Harry and Meghan Markle was also a blip in comparison.

As Netflix and Amazon scramble to find the right content strategy to lure Indians, Hotstar and its local parent firm Star India have aggressively focused on securing broadcast and streaming rights to various cricket series. Cricket is almost followed like a religion in India.

In 2017, Star India, then owned by 21st Century Fox, secured the rights to broadcast and stream the IPL cricket tournament for five years for a sum of roughly $2.5 billion. Facebook also participated in the bidding, offering north of $600 million for streaming. (Star India was part of 21st Century Fox’s business that Disney acquired for $71.3 billion earlier this year.)

That bet has largely paid off. Hotstar said last month that its service has amassed 300 million monthly active users, up from 150 million it reported last year. In comparison, both Netflix and Amazon Prime Video have less than 30 million subscribers in India, according to industry estimates.

In the last two years, Hotstar has expanded to three international markets — the U.S., Canada and, most recently, the U.K. — to chase new audiences. The streaming service is hoping to attract Indians living overseas and anyone else who is interested in Bollywood movies and cricket, Ipsita Dasgupta, president of Hotstar’s international operations, told TechCrunch in an interview. The streaming service plans to enter more nations with high density of Indians in the next few quarters, Dasgupta said.

That’s not to say that Hotstar has a clear path ahead. According to several estimates, the streaming service typically sees a sharp decline in its user base after the conclusion of an IPL season. Despite the massive engagement it generates, it remains operationally unprofitable, people familiar with Hotstar’s finances said.

The ad-supported streaming service offers about 80 percent of its content catalog — which includes titles produced by Star India — for no cost to users. It also syndicates shows and movies from international partners such as HBO, ABC and Showtime — though these titles are available only to paying subscribers. One of the most watched international shows on the platform, “Game of Thrones,” will be ending soon, too.

The upcoming World Cup cricket tournament, which Hotstar will stream in India, should help it avoid the major headache for some time. In the meantime, the service is aggressively expanding its slate of original shows in the nation. One of the shows is a remake of BBC/NBC’s popular “The Office.”