Facebook today released a new SDK that allows mobile app developers to integrate WhatsApp verification into Account Kit for iOS and Android. This will allow developers to build apps where users can opt to receive their verification codes through the WhatsApp app installed on their phone instead of through SMS.

Today, many apps give users the ability to sign up using only a phone number — a now popular alternative to Facebook Login, thanks to the social network’s numerous privacy scandals that led to fewer people choosing to use Facebook with third-party apps.

Plus, using phone numbers to sign up is common with a younger generation of users who don’t have Facebook accounts — and sometimes barely use email, except for joining apps and services.

When using a phone number to sign in, it’s common for the app to confirm the user by sending a verification code over SMS to the number provided. The user then enters that code to create their account. This process can also be used when logging in, as part of a multi-factor verification system where a user’s account information is combined with this extra step for added security. 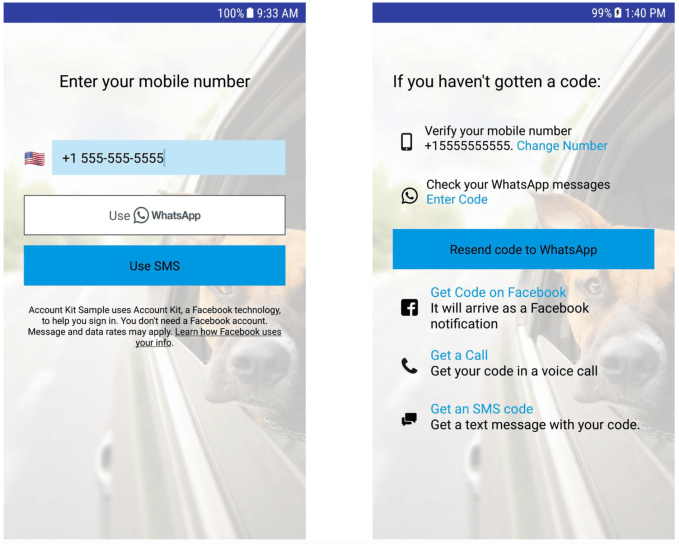 While this process is straightforward and easy enough to follow, SMS is not everyone’s preferred messaging platform. That’s particularly true in emerging markets like India, where 200 million people are on WhatsApp, for example. In addition, those without an unlimited messaging plan are careful not to overuse texting when it can be avoided.

That’s where the WhatsApp SDK comes in. Once integrated into an iOS or Android app, developers can offer to send users their verification code over WhatsApp instead of text messaging. They can even choose to disable SMS verification, notes Facebook.

This is all a part of WhatsApp’s Account Kit, which is a larger set of developer tools designed to allow people to quickly register and log in to apps or websites using only a phone number and email, no password required.

This WhatsApp verification codes option has been available on WhatsApp’s web SDK since late 2018, but hadn’t been available with mobile apps until today.