The popular iOS podcasts app Overcast wants to make it easier for people to share across social media clips from their favorite shows. The feature will likely be well-received by podcasters looking to expand their show’s audience, as they’ve previously been limited to sharing their podcast by way of links or audio-only snippets, for the most part. Overcast’s solution, meanwhile, allows anyone to share either an audio or a video clip from any public podcast, the company said in an announcement.

That means a show’s fans can get in on the action — giving their favorite podcast a viral boost by promoting it on social media, where it could reach new listeners.

To use the clip-sharing feature in Overcast, you first tap on the “share” button at the top-right corner of the app. You can then pick either an audio clip or a portrait, landscape or square video. In the clip-editing interface that appears, you can locate and select the audio clip you want to share. Clips can be up to one minute in length, the company says.

The variety of video formats is designed to appeal to those tasked with marketing a podcast across social media — including Twitter, Instagram, Facebook or Snapchat — where the supported video aspect ratios may vary. In addition, podcast marketers will be able to remove the Overcast branding from their shared clip to give it a more professional feel.

Overcast’s new feature competes with existing tools for marketing audio across social media — like those from Wavve, Headliner, Spotify-owned Anchor and others, including, perhaps, SoundCloud. Some of these services offer captions, as well, which podcasters may prefer to Overcast’s clips.

But unlike other rival tools, Overcast’s clip-sharing feature isn’t meant only for podcast creators and marketers — it’s for listeners, too.

Of course, that also could present a problem. Listeners who have an axe to grind could pull a clip that presents a podcaster in a bad light — perhaps, taking out of context something they said in hopes of manufacturing social media outrage. Or maybe they just catch the podcaster on a bad day saying something dumb. Small gaffes that in the past could have been overlooked could now be used against a podcaster because these viral clips are so easy to create and share.

Time will tell to what extent the feature is adopted and how it’s used, or if the idea makes its way to other apps to become more of a standard.

According to Overcast founder Marco Arment, the clip-sharing feature was inspired by a remark on the Unco podcast by Stephen Hackett, where the problem was discussed in more detail.

In addition to the launch of clips, Overcast’s public sharing page got a small refresh, too. It now features badges to other podcast apps and the RSS feed to the podcast for any show listed in Apple Podcasts. 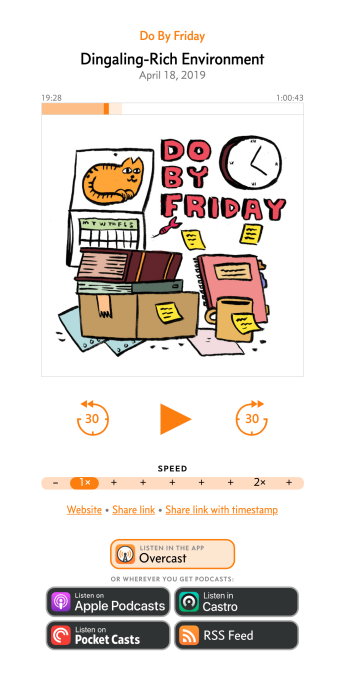 “It’s important for me to promote other apps like this, and to make it easy even for other people’s customers to benefit from Overcast’s sharing features, because there are much bigger threats than letting other open-ecosystem podcast apps get a few more users,” Arment said.

That “much bigger threats” comment refers to the new trend of podcast “exclusives” — like those on Luminary or Spotify, which aren’t available to the public. Arguably, these aren’t podcasts in the strictest sense of the word — they’re audio programs.

The clips-sharing feature takes the opposite position. The podcasts this feature helps to promote are open and accessible to the public — and now all of the content inside each episode is more accessible, too.