A massive penalty hangs over Facebook’s head, but it otherwise had a very strong Q1 earnings report. Facebook reached 2.38 billion monthly users, up 2.5 percent from 2.32 billion in Q4 2018 when it grew 2.2 percent, and it now has 1.56 billion daily active users, up 2.63 percent from 1.52 billion last quarter when it grew 2 percent. Facebook pulled in $15.08 in revenue, up 26 percent year-over-year compared to Refinitiv’s consensus estimates of $14.98 billion in revenue.

Facebook recorded earnings per share of $0.85 compared to estimates of $1.63 EPS. However, that’s because Facebook has set aside $3 billion to cover a potential FTC fine that it’s still resolving. Without that fine, it would have had an EPS of $1.89. Despite the set-aside, Facebook still earned $2.429 billion in profit, though that’s down from $4.988 a year ago and $6.8 billion in Q4 2018. 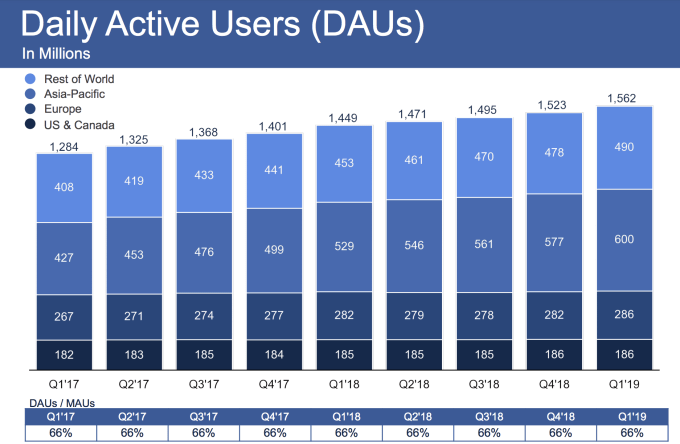 Facebook’s share price rose 8.3 percent to $197.84 after closing before earnings at $182.58, way up from its recent low of $124.06 in December. Wall Street seems to have already priced in the potential FTC fine. Facebook has agreed to strict oversight of how it handled user privacy in a 2011 deal with the FTC. It promised to not misrepresent its privacy practices or change privacy controls without user permission, and it’s now negotiating the fine for potentially breaking those terms.

Facebook wrote in its earnings release about the FTC fine that:

“In the first quarter of 2019, we reasonably estimated a probable loss and recorded an accrual of $3.0 billion in connection with the inquiry of the FTC into our platform and user data practices, which accrual is included in accrued expenses and other current liabilities on our condensed consolidated balance sheet. We estimate that the range of loss in this matter is $3.0 billion to $5.0 billion. The matter remains unresolved, and there can be no assurance as to the timing or the terms of any final outcome.”

It’s possible Facebook escapes with a lesser fine that would likely still dwarf Google’s $22.5 million penalty for violating an FTC privacy deal. But it also might have to drag down a future quarter of earnings if the fine ranges as high as $5 billion or larger. Though Facebook does have $45.2 billion in cash and securities on hand to pay that fine and make any necessary acquisitions. Facebook’s headcount grew 36% year-over-year to 37,773 as it staffs up its security team, but it still has a 22 percent operating margin. 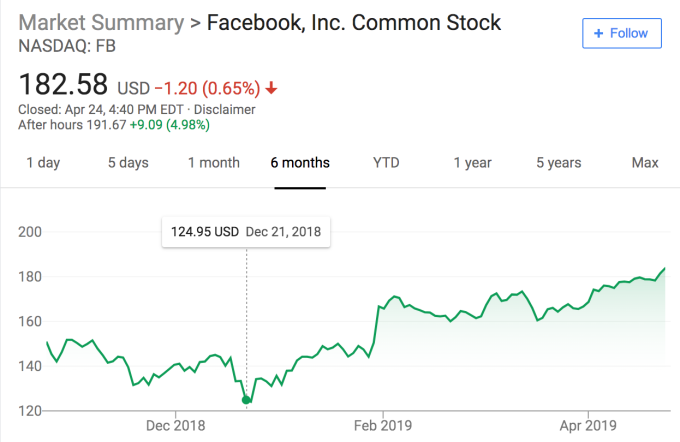 Facebook has managed to hold on to its 66 percent daily to monthly user ratio, showing people aren’t necessarily using it less despite all the backlash. It added 39 million daily users, compared to Snapchat’s addition of 4 million in Q1. But Facebook failed to grow past its 186 million daily user count in the US & Canada where it got stuck last quarter, but at least it added 4 million in its lucrative Europe market, plus it had atypically large gains in Asia-Pacific and the Rest Of World regions. As for monetization, Facebook made modest gains in average revenue per user across markets compared to Q3 2018 (excluding the holiday-laden Q4). Europe did especially well, growing ARPU 8.2 percent.

Zooming out, Facebook now has over 2.7 billion total mothly users across its family of Facebook, Messenger, Instagram, and WhatsApp, the same as last quarter. 2.1 billion people use at least one of those apps daily, up from 2 billion last quarter. Instagram Stories, WhatsApp Status, and Facebook Stories on Facebook and Messenger combined each now have 500 million daily users. Facebook also now has 3 million advertisers buying Stories ads across its apps, so the ephemeral format will likely start to contribute meaningful revenue soon. 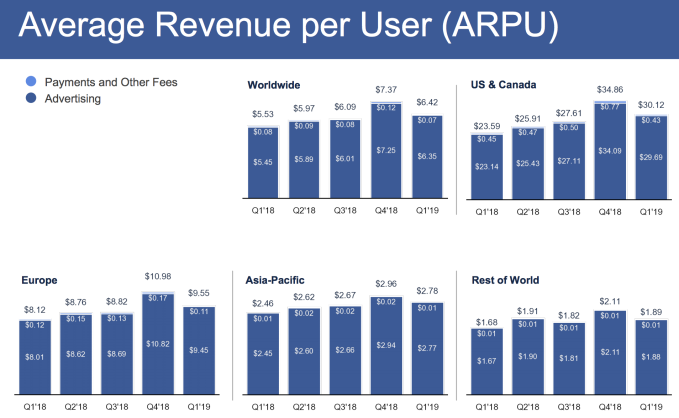 Color From The Earnings Call

In March, Zuckerberg announced plans for a massive privacy-centric overhaul of Facebook to turn it from just a townsquare into also a “living room”. That means unifying its messaging apps with a backend that supports end-to-end encryption, and promoting ephemerality in content sharing and communication. That could help deter calls for regulation, make Facebook harder to break up, and help it stay ahead of competitors like Snapchat, but will also be a massive product and engineering undertaking.

Today, Zuckerberg focused on providing more details to this plan to expand privacy, encryption, impermanence, safety, interoperability, and secure data storage. He stressed that given people traditionally spend more time communicating and consuming content privately than publicly, strengthening Facebook’s “living room” could boost its business. Zuckerberg noted that since Facebook already doesn’t use messaging content for ad targeting and recent content is more useful for its business, encryption and impermanence shouldn’t be a big risk either. Refusing to store data in countries with poor records of privacy could lead to Facebook being banned there, which Zuckerberg admitted is a major business threat, but one it’s grappled with over content policies for years.

In fact, impermanence is already earning money for Facebook. It said that Instagram Stories was the greatest contributor of additional ad impressions this quarter. And while the Facebook and Instagram feeds are already jammed full of ads with little room for more, Facebook says there’s still room to significantly increase Instagram Stories ad load. 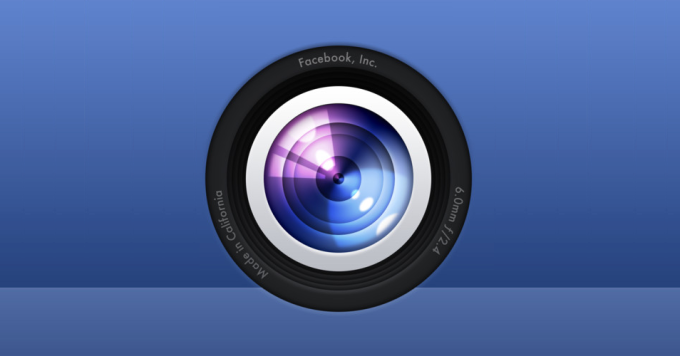 Another highlight of the call was Zuckerberg’s discussion of Facebook’s payments strategy. He confirmed that Facebook plans to build out ways for people to pay merchants through its messaging apps. “So I think that what we’re going to end up seeing is building out payments, which is going to end up being something that we do country by country . . . The goal is to have something where you could do discovery through the broader townsquare-like platforms like Instagram and Facebook, and then you can complete the transactions and follow up with businesses individually and have an ongoing relationship through Messenger and WhatsApp.”

This is the first earnings report of a full quarter following Facebook’s worst-ever security breach in September that impacted 50 million users, shaking confidence in the social network’s privacy and security. It’s also the first full quarter in which Facebook sold its own branded hardware — its Portal video chat device that was well received by critics except for the fact that it was made by Facebook.

Yet the defining story continues to be Facebook’s struggle with claims that its user research and developer platform efforts endangered user privacy and steamrolled competitors in search of growth. That includes TechCrunch’s big scoop that Facebook was paying teens to snoop on their data with a VPN app, which eventually led Facebook to shut down its Onavo user surveillance apps. The fact that Facebook isn’t losing massive numbers of users after years of sustained scandals is a testament to how deeply it’s woven itself into people’s lives.