Industrial automation is already streamlining the manufacturing process, but first those machines must be painstakingly trained by skilled engineers. Industrial robotics giant Fanuc wants to make robots easier to train, therefore making automation more accessible to a wider range of industries, including pharmaceuticals. The company announced a new artificial intelligence-based tool at TechCrunch’s Robotics + AI Sessions event today that teaches robots how to pick the right objects out of a bin with simple annotations and sensor technology, reducing the training process by hours.

Bin-picking is exactly what it sounds like: a robot arm is trained to pick items out of bins and used for tedious, time-consuming tasks like sorting bulk orders of parts. Images of example parts are taken with a camera for the robot to match with vision sensors. Then the conventional process of training bin-picking robots means teaching it many rules so it knows what parts to pick up.

“Making these rules in the past meant having to through a lot of iterations and trial and error. It took time and was very cumbersome,” said Dr. Kiyonori Inaba, the head of Fanuc Corporation’s Robot Business Division, during a conversation ahead of the event.

These rules include details like how to locate the parts on the top of the pile or which ones are the most visible. Then after that, human operators need to tell it when it makes an error in order to refine its training. In industries that are relatively new to automation, finding enough engineers and skilled human operators to train robots can be challenging. 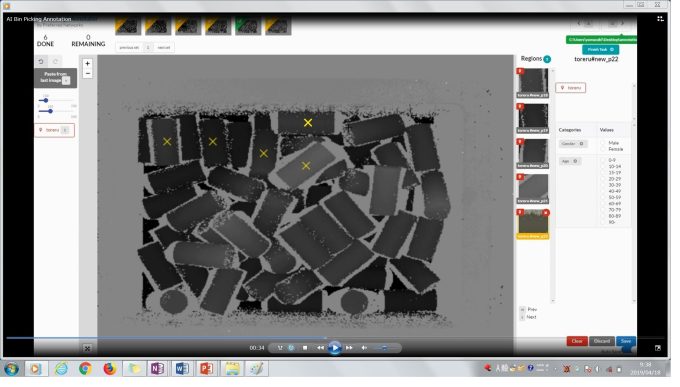 This is where Fanuc’s new AI-based tool comes in. It simplifies the training process so the human operator just needs to look at a photo of parts jumbled in a bin on a screen and tap a few examples of what needs to be picked up, like showing a small child how to sort toys. This is significantly less training than what typical AI-based vision sensors need and can also be used to train several robots at once. 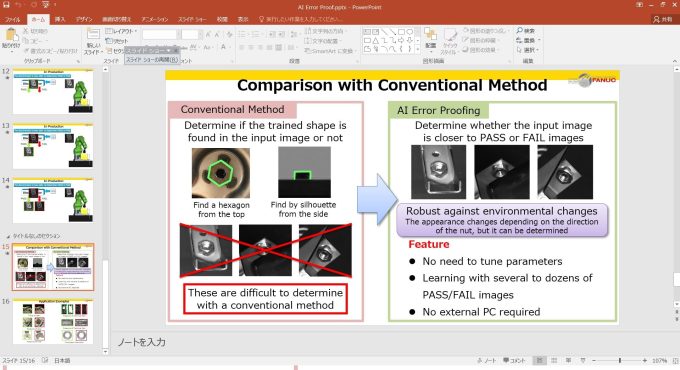 “It is really difficult for the human operator to show the robot how to move in the same way the operator moves things,” said Inaba. “But by utilizing AI technology, the operator can teach the robot more intuitively than conventional methods.” He adds that the technology is still in its early stages and it remains to be seen if it can be used during in assembly as well.