If you haven’t heard of Co-Star, you might just be in the wrong circles. In some social scenes it’s pretty much ubiquitous. Wherever conversations regularly kick off by comparing astrological charts, it’s useful to have that info at hand. The trend is so notable that the app even got a shout out in a New York Times piece on VCs flocking to astrology startups.

This week, the company behind probably the hottest iOS astrology app announced that it has raised a $5.2 million seed round. Maveron, Aspect, 14w and Female Founder Fund all participated in the round, which follows $750,000 in prior pre-seed funding. The company plans to use the funding to craft an Android companion to its iOS-only app, grow its team and “build features that encourage new ways to get closer, new ways to take care of ourselves, and new ways to grow.”

TechCrunch spoke with Banu Guler, the CEO and co-founder of Co-Star about what it was like talking to potential investors to drum up money for an idea that Silicon Valley’s elite echo chambers might find unconventional.

“We certainly talked to some who were dismissive,” Guler told TechCrunch in an email. “But the reality is that interest in astrology is skyrocketing… It was all about finding the right investors who see the value in astrology and the potential for growth.”

If you’ve ever used a traditional astrology app or website to look up your birth chart — that is, to determine the positions of the planets on the day and time you were born — then you’ve probably noticed how most of those services share more in common with ancient Geocities sites than they do with bright, modern apps. In contrast, Co-Star’s app is clean and artful, with encyclopedia-like illustrations and a simple layout. It’s not something with an infinite scroll you’ll get lost in, but it’s pleasant to dip into Co-Star, check your algorithmically generated horoscope and see what your passive aggressive ex’s rising sign is. 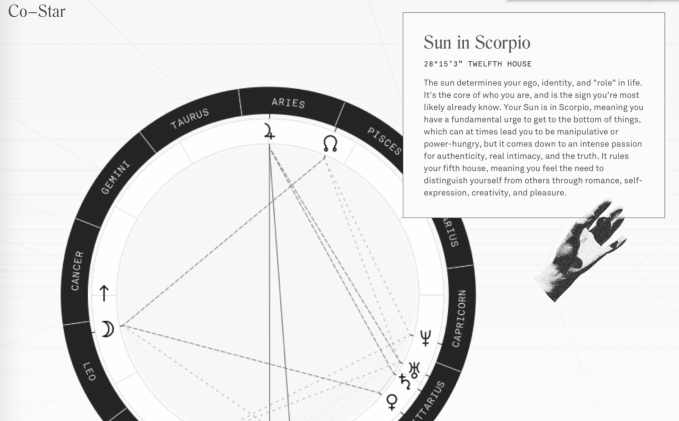 In a world still obsessed with the long-debunked Meyers-Briggs test, you can think of astrology as a kind of cosmic organizational psychology, but one more interested in peoples’ emotional realities than their modus operandi in the workplace. For many young people — and queer people, from personal experience — astrology is a thoroughly playful way to take stock of life. Instead of directly predicting future events (good luck with that), it’s more commonly used as a way to evaluate relationships, events and anything else. If astrology memes on Instagram are any indication, there’s a whole cohort of people using astrology as a framework for talking about their emotional lives. That search for authenticity — and no doubt the proliferation of truly inspired viral content — is likely fueling the astrology boom.

“By positioning human experience against a backdrop of a vast universe, Co-Star creates a shortcut to real talk in a sea of small talk: a way to talk about who we are and how we relate to each other,” the company wrote in its funding announcement. “It doesn’t reduce complexity. It doesn’t judge. It understands.”