Disney’s direct-to-consumer streaming strategy took center stage today at the company’s investor day. That strategy includes Hulu (where the recently closed Fox acquisition has given Disney a controlling stake), ESPN+ and the Indian streaming service Hotstar, but executives spent most of their time hyping the upcoming launch of Disney+.

The company said the service will launch in the United States on November 12, and will have a monthly streaming price of $6.99 per month.

Executives confirmed that unlike Hulu and ESPN+, Disney+ will be entirely ad-free, making all its money from subscriptions. Kevin Mayer, Disney’s direct-to-consumer chairman, also said the company is “likely” to offer a bundle of Hulu, ESPN+ and Disney+ at a discounted price.

Mayer and other Disney executives also offered the first look at what they said is a “working prototype” of the Disney+ service. To a large extent, it looked like any other streaming app, but they made it clear that all the content will be available to download for offline viewing.

The service will be designed around Disney’s portfolio of entertainment brands — there will be separate sections for Disney animation, Pixar, Star Wars, Marvel and National Geographic. In each case, the speakers emphasized the existing library of films. Not all of those films will be available at launch, but many will be, with more added over the first couple years of operation (presumably as they’re freed up from deals with third parties like Netflix). 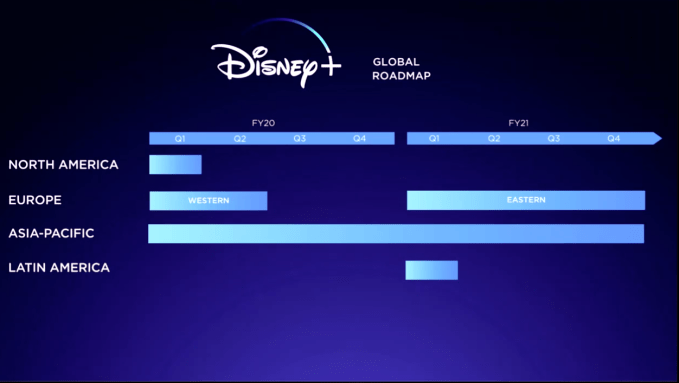 For example, Disney said that at launch, the service will include the entirety of the animation studio’s 13-film Signature collection, plus the first two Star Wars trilogies and “The Force Awakens,” plus “Captain Marvel” and other Marvel films.

In addition, Disney is creating a number of original shows for the service (much of it highlighted in clips and sizzle reals that were not included on the webcast). Those include a whole lineup of Marvel shows that Marvel President Kevin Feige said would be closely tied to the studio’s films, as well as the Star Wars series “The Mandalorian” and a show about the “Rogue One” characters Cassian Andor and K-2SO.

As for when international viewers will actually get to watch all this content, Disney Streaming President Michael Paull said the plan is to roll out across North America, Europe, Asia-Pacific and Latin America throughout 2021.

Oh, and Disney+ will be the exclusive streaming home of “The Simpsons.”

Updated with launch date, pricing and “The Simpsons” exclusivity.