The Echo Link takes streaming music and makes it sound better. Just wirelessly connect it to an Echo device and plug it into a set of nice speakers. It’s the missing link.

The Link bridges the gap between streaming music and a nice audio system. Instead of settling for the analog connection of an Echo Dot, the Echo Link serves audio over a digital connection and it makes just enough of a difference to justify the $200 price.

I plugged the Eco Link into the audio system in my office and was pleased with the results. This is the Echo device I’ve been waiting for.

In my case, the Echo Link took Spotfiy’s 320 kbps stream and opened it up. The Link creates a wider soundstage and makes the music a bit more full and expansive. The bass hits a touch harder and the highs now have a newfound crispness. Lyrics are clearer and easier to pick apart. The differences are subtle. Everything is just slightly improved over the sound quality found when using an Echo Dot’s 3.5mm output.

Don’t have a set of nice speakers? That’s okay; Amazon also just released the Echo Link Amp, which features a built-in amplifier capable of powering a set of small speakers.

Here’s the thing: I’m surprised Amazon is making the Echo Link. The device caters to what must be a small demographic of Echo owners looking to improve the quality of Pandora or Spotify when using an audio system. And yet, without support for local or streaming high-resolution audio, it’s not good enough for audiophiles. This is for wannabe audiophiles. Hey, that’s me.

There are Echo’s scattered throughout my house. The devices provide a fantastic way to access music and NPR. The tiny Echo Link is perfect for the system in my office where I have a pair of Definitive Technology bookshelf speakers powered by an Onkyo receiver and amp. I have a turntable and SACD player connected to the receiver, but those are a hassle when I’m at my desk. The majority of the time I listen to Spotify through the Amazon Echo Input.

I added the Onkyo amplifier to the system last year and it made a huge difference to the quality. The music suddenly had more power. The two-channel amp pushes harder than the receiver, and resulted in audio that was more expansive and clear. And at any volume, too. I didn’t know what I was missing. That’s the trick with audio. Most of the time the audio sounds great until it suddenly sounds better. The Echo Link provided me with the same feeling of discovery. 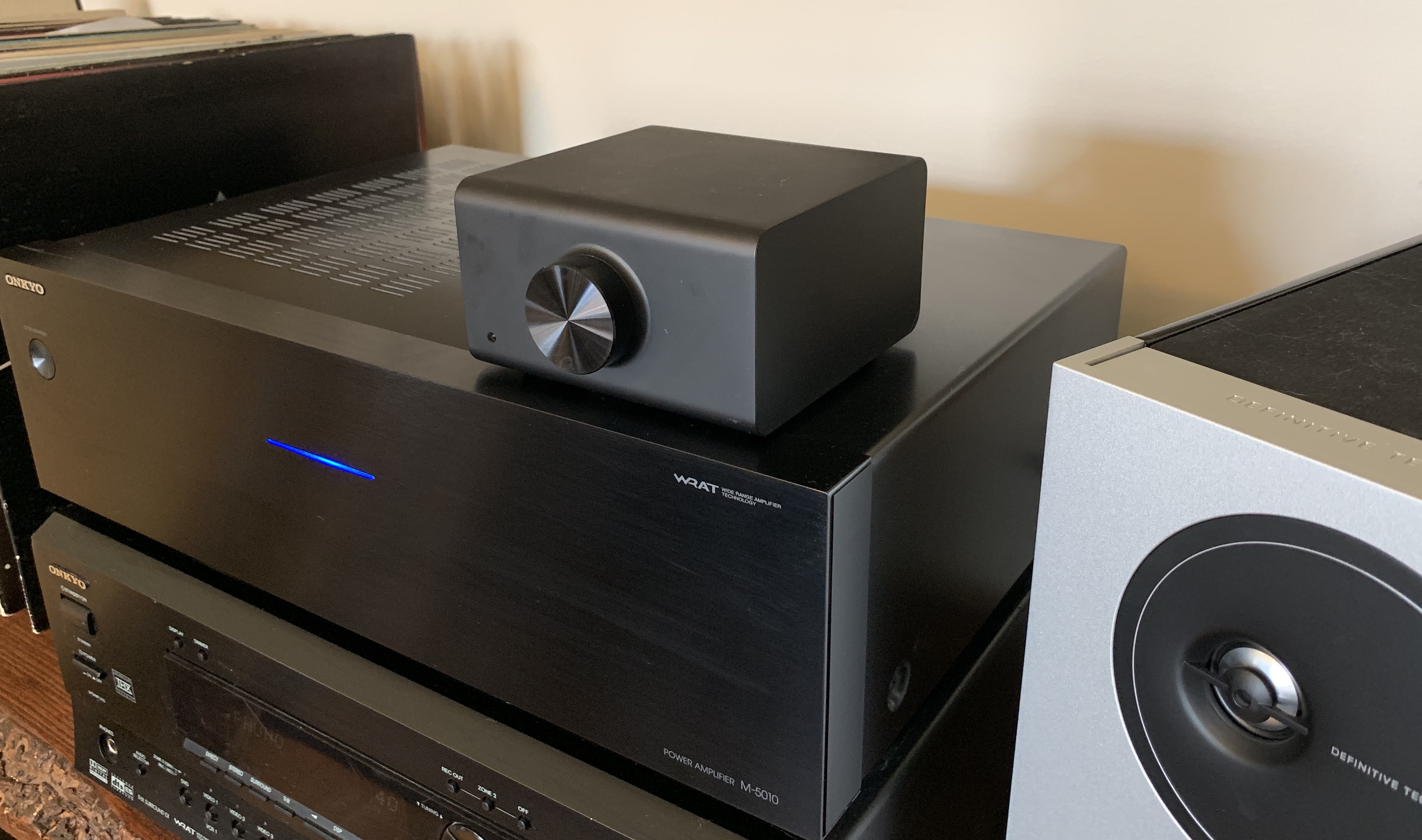 To be clear, the $200 Echo Link does not provide a night and day difference in my audio quality. It’s a slight upgrade over the audio outputted by a $20 Echo Input — and don’t forget, an Echo device (like the $20 Echo Input) is required to make the Echo Link work.

The Echo Link provides the extra juice lacking from the Echo Input or Dot. Those less-expensive options output audio to an audio system, but only through an analog connection. The Echo Link offers a digital connection through Toslink or Digital Coax. It has analog outputs that’s powered by a DAC with a superior dynamic range and total harmonic distortion found in the Input or Dot. It’s an easy way to improve the quality of music from streaming services.

The Echo Link, and Echo Link Amp, also feature a headphone amp. It’s an interesting detail. With this jack, someone could have the Echo Link on their desk and use it to power a set of headphones without any loss of quality.

I set up a simple A/B test to spot the differences between a Link and a Dot. First, I connected the Echo Link with a Toslink connection to my receiver and an Echo Input. I also connected an Echo Dot through its 3.5mm analog connection to the receiver. I created a group in the Alexa app of the devices. This allowed each of the devices to play the same source simultaneously. Then, as needed, I was able to switch between the Dot and Link with just a touch of a button, providing an easy and quick way to test the differences.

I’ll leave it up to you to justify the cost. To me, as someone who has invested money into a quality audio system, the extra cost of the Echo Link is worth it. But to others, an Echo Dot could be enough.

The Echo Link takes streaming music and instantly improves the quality. In my case, the improvements were slight but noticeable. It works with all the streaming services supported by Echo devices, but it’s important to note it does not work with Tidal’s high-res Master Audio tracks. The best the Echo Link can do is 320 kbps from Spotify or Tidal. This is a limiting factor and it’s not surprising. If the Echo Link supported Tidal’s Master Tracks, I would likely sign up for that service, and that is not in the best interest of Amazon, which hopes I sign up for Amazon Music Unlimited.

I spoke to Amazon about the Echo Link’s lack of support for Tidal Master Tracks and they indicated they’re interested in hearing how customers will use the device before committing to adding support.

The Link is interesting. Google doesn’t have anything similar in its Google Home Line. The Sonos Amp is similar, but with a built-in amplifier, it’s a closer competitor to the Echo Link Amp. Several high-end audio companies sell components that can stream audio over digital connections, yet none are as easy to use or as inexpensive as the Echo Link. The Echo Link is the easiest way to improve the sound of streaming music services.

Review: The $299 Echo Link Amp adds Alexa to any speaker