Bump, the Y Combinator-backed marketplace for streetwear, is announcing that it has raised $7.5 million in Series A funding.

Bump’s Jack Ryder told me that even before starting the company, he and his co-founder Sam Howarth were active in buying and selling streetwear and sneakers — but he admitted that it took several tries before the startup found the right model. (He described a previous iteration, involving a reverse marketplace where people post the items they’re interested in buying, as “the world’s worst idea.”)

Now, however, Ryder said Bump has nearly 2 million registered users. It allows them to buy and sell jackets, T-shirts, sneakers and more among themselves. They can sort through the marketplace based on brand, color and size, and can chat one-on-one or in groups.

The startup relies on moderators and crowdsourcing to determine when a listing looks fake — apparently there have been issues with less than 2 percent of listings in the app, and Ryder said most of the time it’s just young, inexperienced sellers “who didn’t understand how to ship the item.”

Ryder sees Bump’s social side as the real opportunity for growth. While he said the startup still has “tons of room in streetwear to keep going,” he suggested that the “bigger and more important mission” is to turn online shopping into “a multi-player experience.” 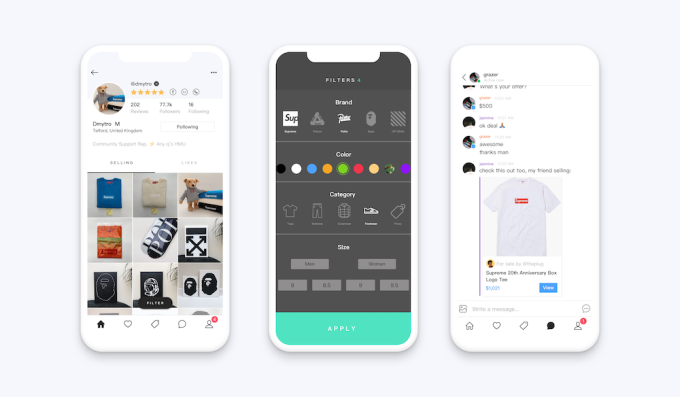 “There’s tons of places where you can buy streetwear online … but the real unique thing about Bump was the social side,” he said. “The average age of our users is 15 years old — that’s actually way younger than the demographic of people interested in sneakers and streetwear. The problem we’re solving isn’t making it easier to buy streetwear; it’s how teenagers, how Gen Z shops with their friends online.”

Ryder said that when he was at YC, he was told to shy away from the idea of social shopping, because there’s “almost like a graveyard” of failed startups. In his view, however, those startups were just “adding a like button or adding a follow button,” rather than really bringing the social and shopping experiences together.

Meanwhile, Instagram and other social networks have been adding shopping capabilities, but he said they face the need to juggle different kinds of content and users.

“We think people are getting a way better shopping experience [on Bump], just because it’s a marketplace first,” Ryder said.

With the new round, Bump plans to relocate from New York to London, where it already employs some contractors, and where Ryder and Howarth were initially based.

The funding was led by e.ventures, with the firm’s Brendan Wales joining the Bump board. Kleiner Perkins, Y Combinator and undisclosed angel investors also participated.

“Having been early investors in both Farfetch and TheRealReal, we have seen firsthand how luxury and streetwear have converged over the past five years,” said Wales said in a statement. “Bump is at the intersection of both, with a social product that enables Gen Z buyers and sellers of high-end streetwear to transact globally in a peer-to-peer fashion. Jack and Sam of Bump, exemplify founder authenticity for this category, and we are grateful to be partnering with the entire team going forward.”

Bump is a peer-to-peer marketplace for streetwear