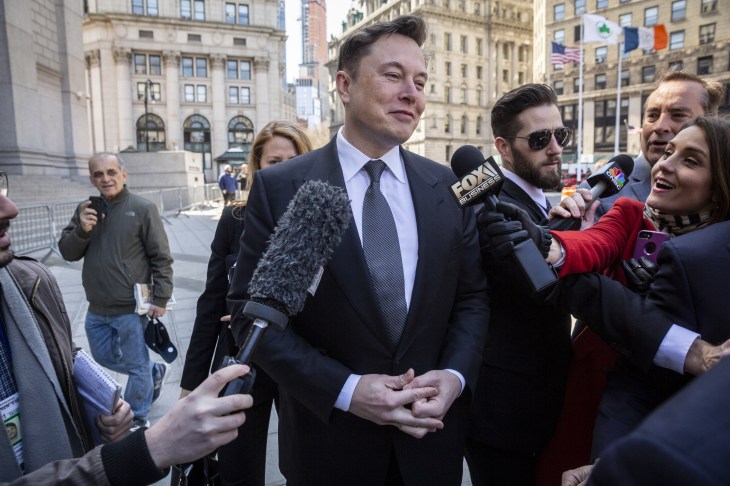 Tesla, Elon Musk and the U.S. Securities and Exchange Commission have two weeks to work out their differences and come to a new resolution, a U.S. judge said Thursday at the conclusion of a hearing held to determine whether the automaker’s CEO should be held in contempt for his Twitter use.

The SEC had asked the court to hold Musk in contempt for violating a settlement agreement reached last October over Musk’s now infamous “funding secured” tweet. Under that agreement, Musk is supposed to get approval from Tesla’s board before communicating potentially material information to investors, the agency has argued. The SEC says a February 19 tweet violated the agreement.

Musk contends he didn’t violate the agreement and that the problem lies in the SEC’s interpretation, which he described as “virtually wrong at every level,” in a recent court filing.

As lawyers from Tesla and the SEC argued their points Thursday, U.S. District Judge Alison Nathan’s questioning suggested little patience with the two parties’ inability to reach a resolution, according to TechCrunch’s review of several reported accounts of inside the courtroom, including from Bloomberg and Courthouse News.

Nathan says that she has "serious concerns" that her ruling won't resolve the controversy.

"My call to action is for everyone to take a deep breath, put your reasonableness pants on and work this out."

Musk told reporters after the hearing that he was “very impressed” with Nathan’s analysis and later when asked whether he would be able to work out problems with the SEC, he replied “Most likely,” Bloomberg reported.

Musk later issued a statement, which was emailed to TechCrunch. It reads:

I have great respect for Judge Nathan, and I’m pleased with her decision today. The tweet in question was true, immaterial to shareholders, and in no way a violation of my agreement with the SEC. We have always felt that we should be able to work through any disagreements directly with the SEC, rather than prematurely rushing to court.  Today, that is exactly what Judge Nathan instructed.

The concerns about the outcome of the hearing, which some worried would result in Musk losing his CEO position, along with disappointing delivery numbers in the first quarter put pressure on Tesla’s share price. Tesla shares fell more than 8 percent to close at $267.78 on Thursday.

The increasingly expensive scuttlebutt between Musk and the SEC began in August when the CEO tweeted that he had “funding secured” for a private takeover of the company at $420 per share.  The SEC filed a complaint in federal district court in September alleging that Musk lied.

Musk and Tesla settled with the SEC without admitting wrongdoing and Tesla agreed to pay a $20 million fine; Musk had to agree to step down as Tesla chairman for a period of at least three years; the company had to appoint two independent directors to the board; and Tesla was also told to put in place a way to monitor Musk’s statements to the public about the company, including via Twitter.

However, the relationship between Musk and the SEC has remained strained. Musk has openly criticized the SEC via Twitter on various occasions, openly mocking the agency at times, even days after the settlement was reached:

Just want to that the Shortseller Enrichment Commission is doing incredible work. And the name change is so on point!

In February, the SEC escalated matters and asked a judge to hold Musk in contempt for violating the settlement agreement. Musk tweeted February 19 that Tesla would produce “around” 500,000 cars this year, correcting himself hours later to clarify that he meant the company would be producing at an annualized rate of 500,000 vehicles by year-end.

Tesla, Elon Musk and the U.S. Securities and Exchange Commission have two weeks to work out their differences and come to a new resolution, a U.S. judge said Thursday at the conclusion of a hearing...