The idea here is that the exhibitors themselves — not startups — should be involved in establishing the business model that’s right for them. Atom Tickets will instead provide the underlying technology and support that makes such a thing possible.

The new platform, called Atom Movie Access, will be offered to exhibitors across North America. It provides a fully digitally booking platform for subscribers through the Atom Tickets app. That means subscribers can also take advantage of Atom Tickets’ other benefits — like reserving seats in advance, inviting friends through their contacts, pre-ordering concessions for quick pickup where available and checking in using a phone instead of paper tickets. 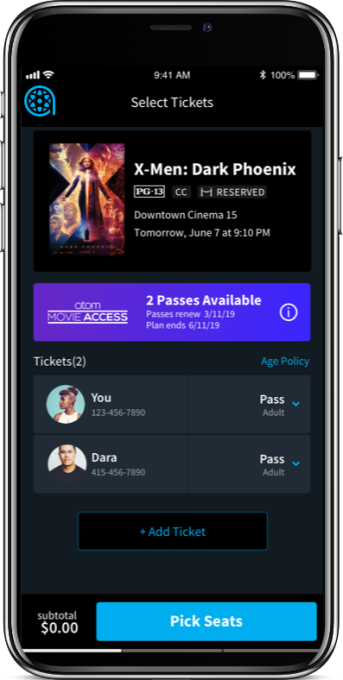 On the back end, Atom Tickets will also handle the payment processing, customer service, fraud detection and anti-abuse measures. The latter is particularly important for movie ticket subscriptions, as MoviePass noted that as much as 20 percent of its customers were abusing the service, which significantly contributed to its financial issues.

In addition, the platform will allow subscribers to be able to make complex transactions in-app, like redeeming a free movie while also buying full-priced tickets for a guest in one sale. It also supports things like being able to choose between an included free screening or saving it for later, the company says, and allows for the creation of differently tiered plans. For example, there can be plans for both individuals or groups and tiers for standard and premium movie formats.

“Atom Tickets is an innovative ticketing platform that enables exhibitors to reach and engage new and incremental audiences,” said Matthew Bakal, chairman and co-founder of Atom Tickets, in a statement about the launch. “We’ve always believed in being a valuable partner to exhibitors, starting with the core functionality of our app, which allows for marketing promotions at specific locations, integrating exhibitor loyalty plans and giving customers the ability to pre-order concessions. Now with Atom Movie Access, we’re thrilled to provide the technology that will enhance the direct-to-consumer relationship of moviegoers with their favorite theaters.”

There are still several unknowns about the new platform — most notably the pricing for exhibitors. In an interview with Variety, Bakal suggested it would not be prohibitive as Atom Tickets would instead take a cut of subscriptions. The report also noted that no theaters have signed up yet, but the pitching will begin in earnest at a trade show next week in Las Vegas.