“Don’t read the comments” is one of those clichés that sticks around because it’s still good advice — maybe the best advice. But the team at Respondology is trying to change that.

The company started out by helping brands find and respond to messages on social media. Senior Vice President of Sales Aaron Benor explained that in the course of that work, it also built a tool to mitigate “the vitriol, the awful toxicity of online social media.”

“We realized that the tool had a lot more legs than we thought, and we decided to pursue it full force and sunset the advertising business,” Benor said. “What really I love about this new product is that the big picture, long-term, is: We can put an end to cyberbullying.”

That’s a big goal, and to be clear, Respondology isn’t trying to reach it immediately. Instead, it’s launching a product called The Mod that allows individual brands and influencers to weed out toxic, trollish or spammy comments on Instagram and YouTube, rendering them invisible to most followers.

Benor explained that the product has two lines of defense. First, there’s automated keyword detection, where certain words will cause a comment to be flagged. The customer can decide which categories they want to filter out (“mild” or “severe” swearing, sexual references, racist remarks and so on), and they can also view and reinstate flagged comments from their Respondology dashboard. 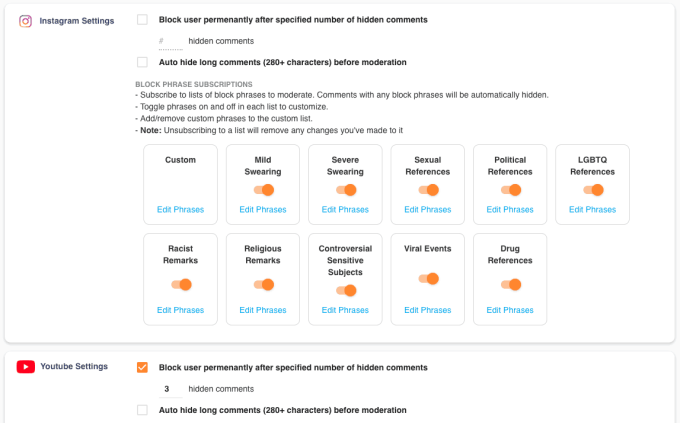 Second, the company has built up a network of around 1,500 moderators who look at all the comments that aren’t flagged, and they can decide whether they’re appropriate to post. So even if a comment doesn’t use one of the red-flag keywords, a human can still catch it. (Customers that want to be extra careful can also turn on an option where multiple moderators vote on whether a comment should be hidden or posted.)

Benor demonstrated the system for me using a test Instagram account. I got to play the troll, posting several comments at his prompting. Each time, the comment was visible for just a few seconds before the Respondology system sprang into action and the comment disappeared.

When I posted profanity, it was automatically flagged and stayed hidden, while my other comments popped up in the moderation app — and if they were approved, they’d reappear on Instagram. All of this activity remained hidden from my account, where it just looked like my comments had been published normally.

Of course, the big social platforms have built their own moderation tools, but it seems clear that the problem remains unsolved. And even if platform moderation improves, Benor said, “This is an agnostic tool. [Our customers] have complete choice and control. This is not the platform saying, ‘This is what we’re going to offer you’; this is what’s going to work for you as a creator.”

We also discussed a recent story in The Verge highlighting the impact that moderating toxic content can have on people’s mental and emotional health. But Benor argued that while Facebook moderators have to spend most of their time dealing with “the worst of the worst,” Respondology’s team is mostly just approving innocuous commentary. Plus, they’re freelancers who only work when they want, and can stop at any time.

“We haven’t heard any negative feedback,” Benor added. “We all act as moderators ourselves — because what better way is there to know the product and understand it — and I’ve never been shocked by what I’ve seen.”

Respondology charges customers of The Mod based on the volume of comments. Benor said the pricing can range from “a few dollars a month to a few thousand dollars a month.”

Ultimately, he’s hoping to release a version for non-professional users too — so parents, for example, can automatically hide the worst comments from their kids’ online accounts.