There has been some negative sentiment surrounding the games industry recently, with stock prices of public games companies in question in both the U.S. and China. While being contrarian to market sentiment is always risky, it’s also possible that folks might be taking a long-term solution to a short-term problem. Games industry software/hardware combined revenue could drive well over $200 billion of revenue by 2023, and there was a record $5.7 billion investment in games companies in 2018. So what’s going on?

The games industry isn’t one monolithic sector. Depending on how you slice it, the market is made up of 15 sectors, eight platform types (e.g. mobile, PC, console) and even more proprietary hardware/software platforms (e.g. iOS, Android, Xbox One, Sony PS4, Nintendo Switch). 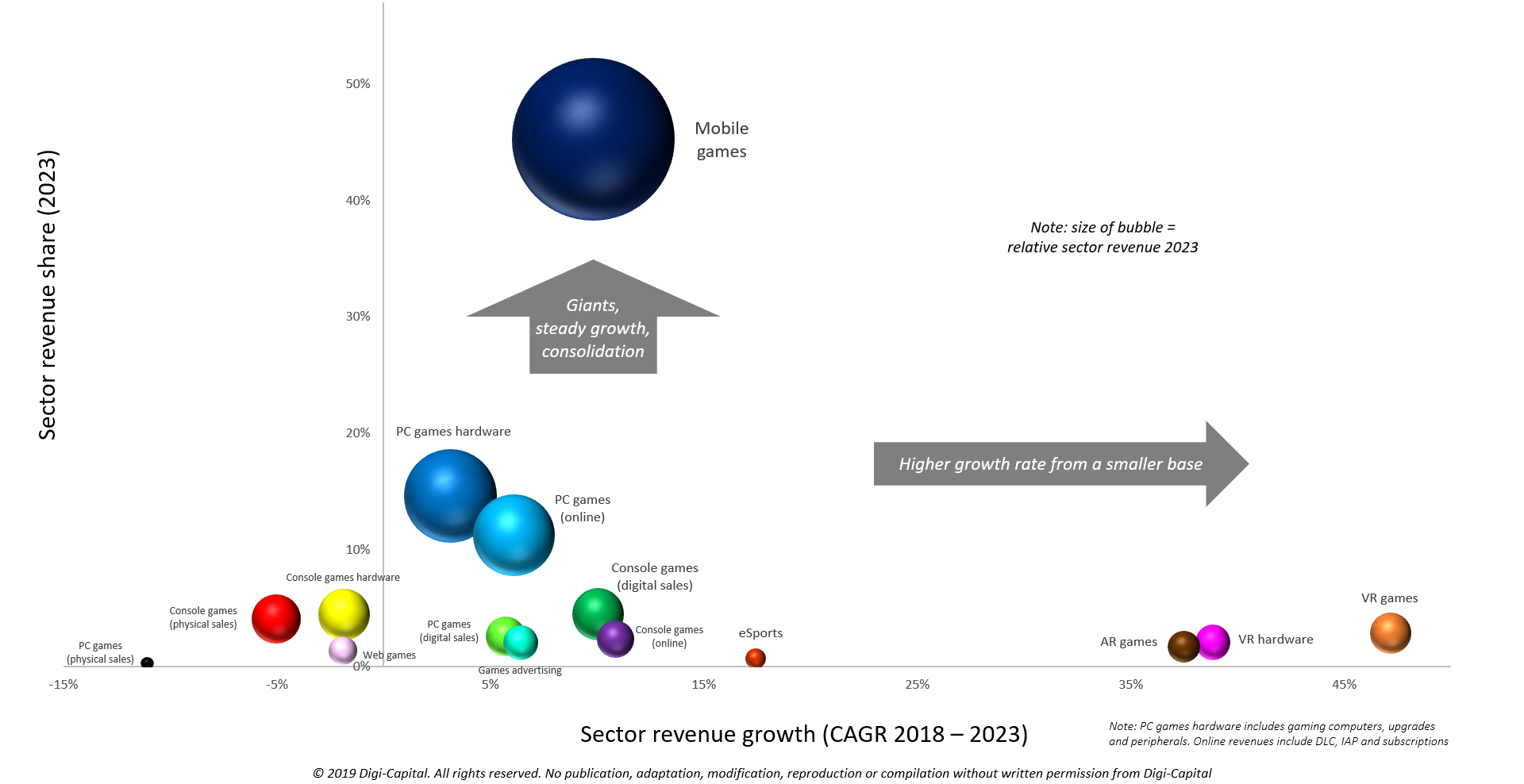 (Note: See selected data below. Free charts do not include all the numbers, axes and data from Digi-Capital’s Games Report, with underlying data sourced directly from companies and reliable secondary sources.)

We first forecast mobile’s dominance of the games market way back in 2011. At that time, many traditional games companies didn’t believe mobile/online games could become the driving force for games. Some of those companies no longer exist, so what’s happening today is nothing new.

Total global mobile app store revenues (gross across games and non-games apps, including app store revenue share) topped $100 billion for the first time in 2018. Mobile games delivered around three quarters of that number, as they have consistently for years. So where mobile games drove more than $70 billion gross revenue globally last year, they could top $100 billion revenue (again gross, including app store revenue share) in their own right in the next five years. But like all games sectors, mobile games are hit-driven. And this could be the source of some of the mismatch between the market’s understanding of short-term trends and long-term potential.

For example, Supercell’s Clash of Clans and Clash Royale have delivered over $10 billion revenue to date. However, Supercell also saw revenues and profits decline in 2018 for the second year in a row as its franchises matured. Yet Supercell’s newest franchise, Brawl Stars, delivered $100 million revenue within its first two months. Swings and roundabouts.

Epic Games had the biggest breakout mobile games hit of 2018, with Fortnite contributing significantly to a reported $3 billion profit in 2018. It also anchored part of the interest behind a record $1.25 billion fundraising round last year. Yet the company removed once-dominant mobile franchise Infinity Blade from the App Store, and redirected internal development resources to focus on Fortnite by closing Paragon and stopping further development on Unreal Tournament. We will come back to Fortnite in the context of mobile games becoming platforms in their own right.

Perhaps the biggest concern for mobile games after last year is China, in which the regulator ceased approving new games for most of 2018. This weighed particularly heavily on market heavyweights Tencent and NetEase, although the regulator returned to approving their games this year. However, the regulator again stopped accepting games in February, only to approve more games in March. This regulatory risk has resulted in our downgrading Chinese games revenue growth rates until a clearer long-term pattern emerges.

Niantic’s mobile AR smash Pokémon GO took just over 1 percent of mobile games revenue globally last year, and has been reported to drive some astonishingly big numbers: 800 million downloads, more than $2.5 billion lifetime revenue, 147 million MAU, 5 million DAU, 78 percent of users aged 18 to 34, 144 billion steps taken by users, 500 million visits to sponsored locations and Niantic’s valuation of nearly $4 billion (Note: Not all of these figures have been confirmed by Niantic.) Off the back of this, Niantic is exploring Pokémon GO’s potential to become a platform, with GO Snapshot challenging Snapchat, and the Niantic Real World Platform as a serious AR Cloud player. We’ll come back to these.

PC games hardware/software is big, too 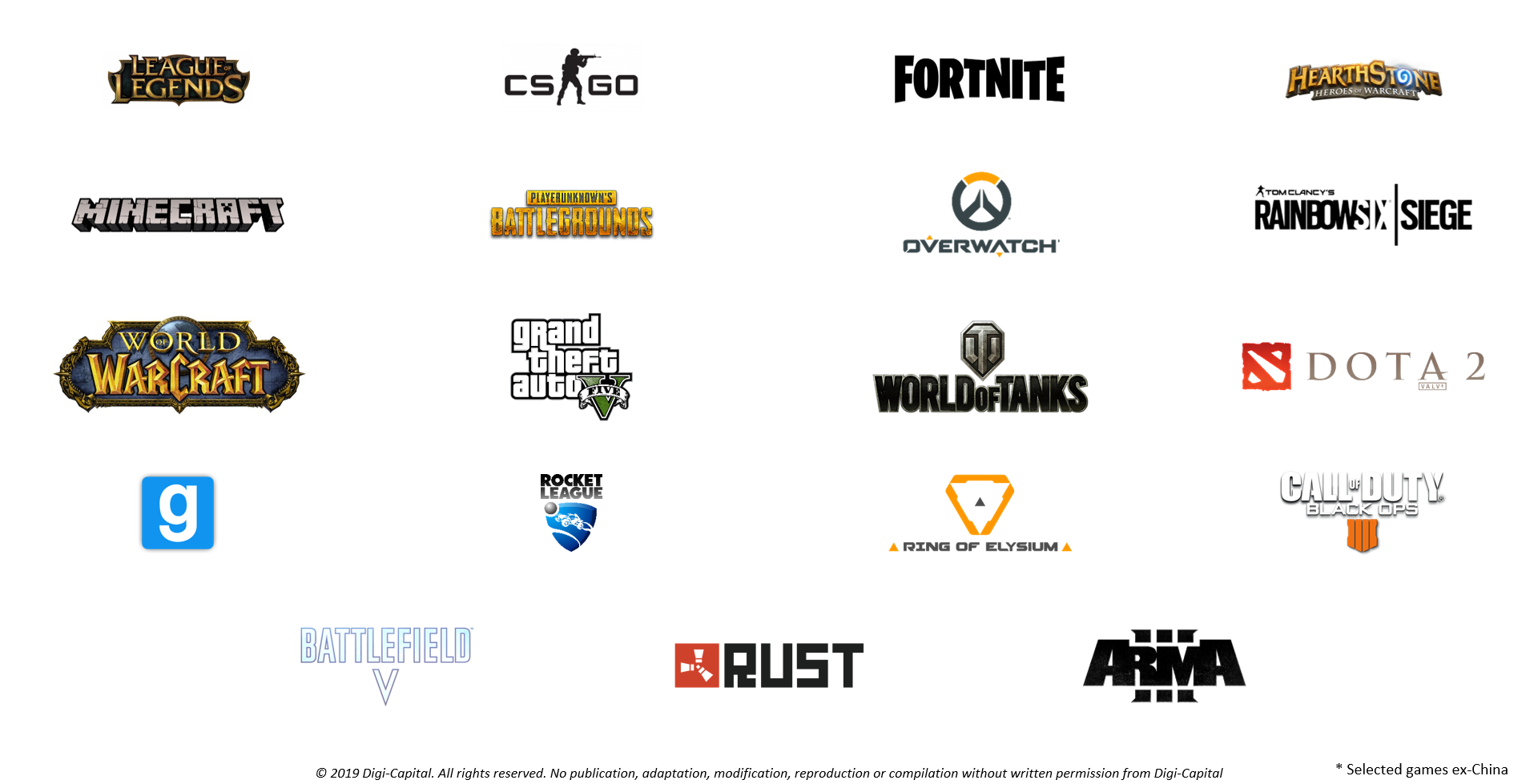 While PC games hardware is massive, users are buying that hardware mainly to play MMO/MOBA games. This part of the market is consolidated around franchises from major public games publishers such as Tencent and Activision Blizzard, as well as independents like Wargaming and Bluehole.

High-growth from a low base

Of the remaining market sectors, a handful are small today but have high-growth potential long-term. These include VR games, VR hardware, AR games and esports. Yet taken individually, each sector is likely to deliver in the 1 percent to 2 percent range of total games market revenue in five years’ time. So great for indie developers, but more challenging commercially for the big guns in terms of scale.

Geographical games market discussions tend to focus on China and the U.S., but there are more than 50 country markets driving growth at a global level. Scales and growth rates vary dramatically from giant, stable growth countries such as China (even with its current uncertainty), the U.S. and Japan to higher growth markets like India and Russia. In aggregate, Asia could take around half of global games market revenue by 2023 (despite short-term concerns about China). Europe might deliver around a quarter of global revenue, followed by North America at around one fifth in the same time frame. Countries in MEA and Latin America make up the balance at a much lower level. 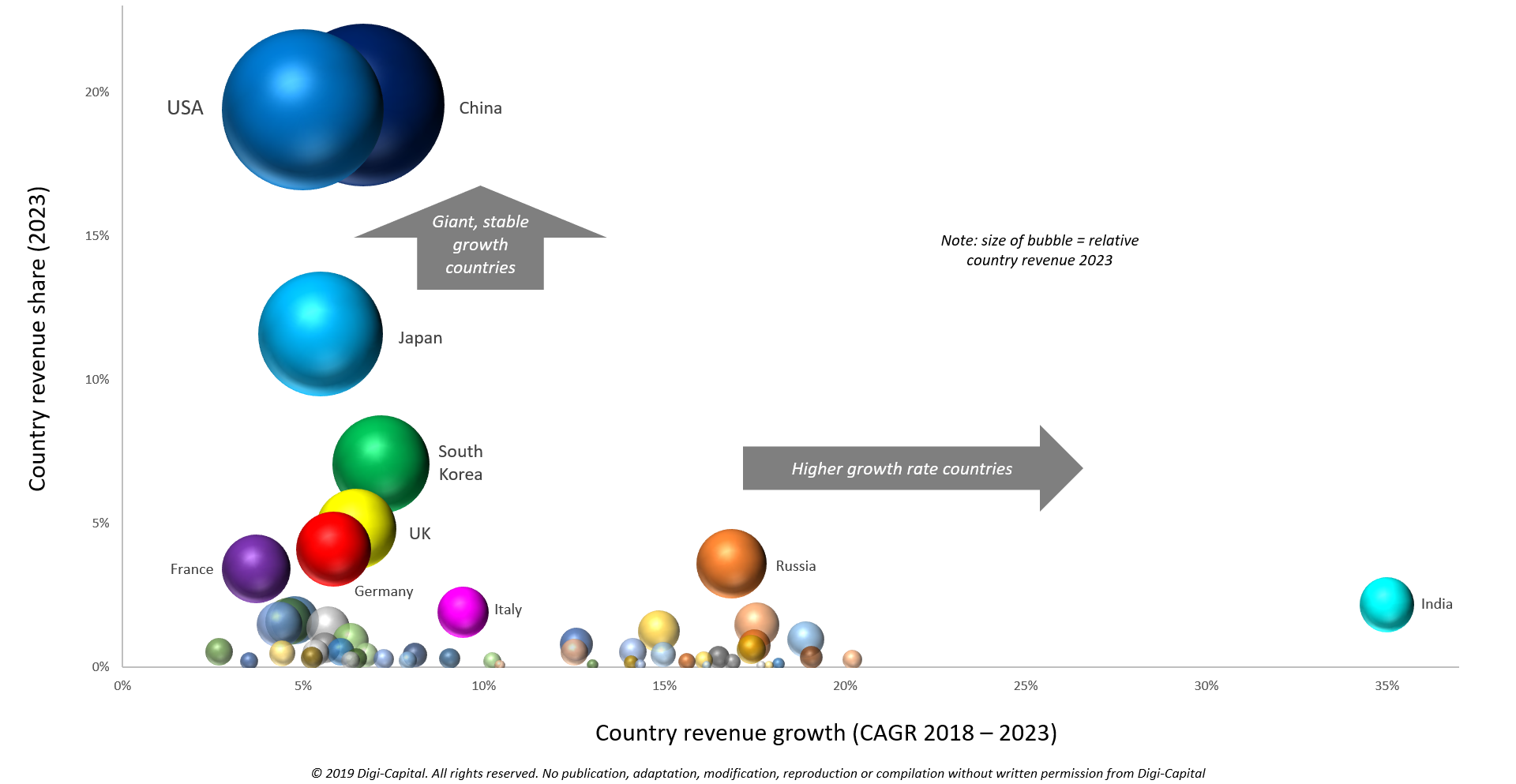 The law of big numbers caught up with the games industry years ago, with the 10 largest publicly listed games companies taking three quarters of public games company revenues globally (Note: This ratio does not include private games company revenues, which are substantial). When you already produce billions to tens of billions of dollars in revenue, high growth rates aren’t easy to come by as new hits counterbalance maturing franchises.

Top grossing mobile games of recent years (outside China) often came from independents. Standouts include Supercell, King, Epic Games, Niantic, Machine Zone and others. Perhaps in response to this dynamic, there was more than $75 billion of games M&A over the last five years. Major games companies have been buying both growth and cash flow.

The beauty of what Steve Jobs created with the App Store is that it democratized distribution of apps at scale beyond the early social games market. It also enabled indie games developers to build some of the rocket ships we’ve seen over the last decade. Yet despite massive growth, even the biggest mobile games couldn’t really be described as platforms in the traditional sense. Not yet.

Where Tencent’s WeChat messaging platform looks like a domestic app store rival with its “mini-programs,” some mobile games pureplays are taking very different routes to becoming platforms in their own right.

For Epic Games, the recent Marshmello concert in Fortnite held out the tantalizing prospect of the beginnings of the “Metaverse” on ubiquitous, affordable mobile devices. With 10.7 million concurrent attendees, this represents a significant milestone in the evolution of games as platforms. Given Fortnite’s previous records for streaming on Twitch and concurrent esports tournament viewers, the savvy Tim Sweeney is beginning to leverage all that scale in a totally new way. Together with building its own app store and the quality of its Unreal Engine, the lessons learned from Fortnite and partial owner Tencent are leading to new horizons.

Where Epic Games is building a metaverse that is a little like Ready Player One without the headsets, Niantic has taken a different approach. Leveraging the real-world, big data stream coming from Pokémon GO, Niantic is building the core of an AR cloud ecosystem to challenge Google, Apple and Facebook. It could also move the company far beyond its entertainment origins for real-world navigation, social, e-commerce, advertising and more.

Epic Games and Niantic could become two of the most valuable platform companies in the world, with long-term potential even they might not fully understand yet.

To infinity and beyond

All this potential doesn’t mean that short-term concerns aren’t valid, or that some games companies (even those currently at scale) might not fall from grace. Some of the volatility of recent times could turn out to be right on the money. When we talked to Epic Games’ CEO Tim Sweeney about all of this, he said “I think that we’re just in the final days of a long transition away from the old retail-centric game release model. Good times ahead.”

With the long-term prospects for games still looking positive, the brave, bold and lucky could have a bright future.