Site Reliability Engineering (SRE) is an extension of DevOps designed for more complex environments. The problem is that this type of approach is difficult to implement and has usually only been in reach of large companies, requiring custom software. Blameless, a Bay Area startup, wants to put it reach of everyone. It emerged from stealth today with an SRE platform for the masses and around $20 million in funding.

For starters, the company announced two rounds of funding with $3.6 million in seed money last April and a $16.5 million Series A investment more recently in January. Investors included Accel,  Lightspeed Venture Partners and others.

Company co-founder and CEO Ashar Rizqi knows first-hand just how difficult it is to implement an SRE system. He built custom systems for Box and Mulesoft before launching Blameless two years ago. He and his co-founder COO Lyon Wong saw a gap in the market where companies who wanted to implement SRE were being limited because of a lack of tooling and decided to build it themselves. 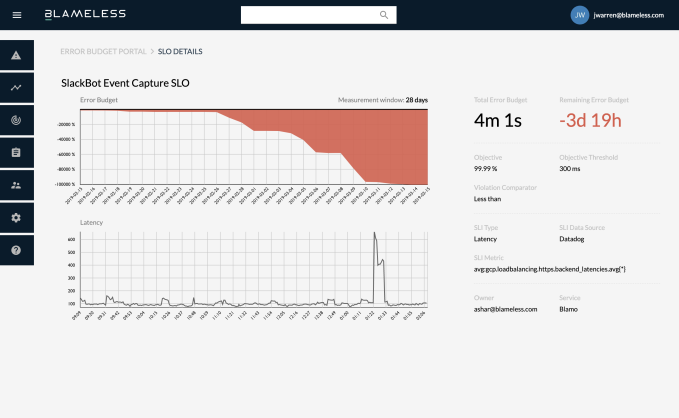 As companies move to containers and continuous delivery models, it brings a level of complexity to managing the developers, who are working to maintain the delivery schedule, and operations, who must make sure the latest builds get out with a minimum of bugs. It’s not easy to manage, especially given the speed involved.

Over time, the bugs build up and the blame circulates around the DevOps team as they surface. The company name comes because their platform should remove blame from the equation by providing the tooling to get deeper visibility into all aspects of the delivery model.

At that point, companies can understand more clearly the kinds of compromises they need to make to get products out the door, rather than randomly building up this technical debt over time. This is exacerbated by the fact that companies are building their software from a variety of sources, whether open source or API services, and it’s hard to know the impact that external code is having on your product.

“Technical debt is accelerating as there is greater reliability on micro services. It’s a black box. You don’t own all the lines of code you are executing,” Rizqi explained. His company’s solution is designed to help with that problem.

The company currently has 23 employees and 20 customers including DigitalOcean and Home Depot.