Nigerian startup Gloo.ng is dropping consumer online retail and pivoting to B2B e-procurement with Gloopro as its new name.

The Lagos-based venture has called it quits on e-commerce grocery services, shifting to a product that supplies large and medium corporates with everything from desks to toilet paper.

Gloopro’s new platform will generate revenues on a monthly fee structure and a percentage on goods delivered, according to Gloopro CEO D.O. Olusanya.

Gloopro, which raised around $1 million in seed capital as Gloo.ng, is also in the process of raising its Series A round. The startup looks to expand outside of Nigeria on that raise, “before the end of next year,” Olusanya told TechCrunch.

Gloopro’s move away from B2C comes as several notable consumer digital sales startups have failed to launch in Nigeria — Africa’s most populous nation with the continent’s highest number of online shoppers, per a recent UNCTAD report.

Gloo.ng’s shift to B2B electronic commerce was prompted by Nigeria’s 2016 economic slump and a customer request, according Olusanya.

“When the recession hit it affected all consumer e-commerce negatively. We saw it was going to take a longer time to get to sustainability and profitability,” he told TechCrunch.

Then an existing client, Unilever, requested an e-procurement solution in 2017. “We observed that the unit economics of that business was far better than consumer e-commerce,” said Olusanya.

Gloopro dubs itself as a “secure cloud based enterprise e-procurement and commerce platform…[for]…corporate purchasing,” per a company description.

“The old brand Gloo.ng, is going to be rested and shut down completely. The corporate name will be PayMente Limited with the brand name Gloopro,” Olusanya said.

From the Gloopro interface customers can order, pay for and coordinate delivery of office supplies across multiple locations. The product also produces procurement analytics and allows companies to designate users and permissions. 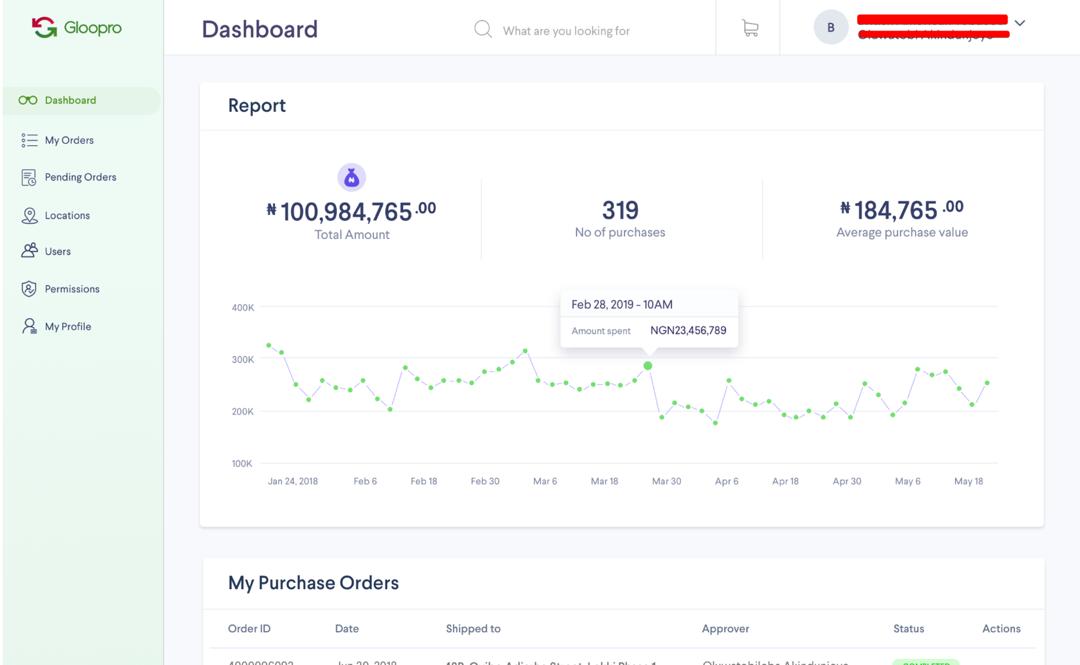 Olusanya touts the product’s benefits at improving transparency and efficiency in the purchasing process.

“It makes procurement transparent and secure. A lot of companies in Nigeria still use paper invoices and there are some shenanigans,” he said.

Gloopro began offering the service in beta and building a customer base prior to winding down its Gloo.ng grocery service.

Olusanya believes the company can compete with other global e-procurement providers, such as SAP Ariba and GT-Nexus, by “leveraging our sourcing and last-mile delivery experience in Nigeria” and expertise working around local requirements in Africa.

Gloopro expects to hit $4 million in revenue by the end of the year and the company could reach $100 million over the course of its international expansion into countries like South Africa, Kenya, Morocco, Egypt and the Ivory Coast, according to Olusanya. A seed investor briefed on Gloo.ng’s estimates confirmed the company’s revenue expectations with TechCrunch.

Gloo.ng’s pivot to Gloopro and e-procurement comes during an up and down period for B2C online retail in Nigeria, home of Africa’s largest economy.

Last year, e-commerce startup Konga.com, backed by roughly $100 million in VC, was sold in a distressed acquisition, at a loss to investors, including Naspers. In late 2018, Nigerian online sales platform DealDey shut down.

On the possible upside, several outlets reported this year that Jumia — Africa’s largest e-commerce site and first unicorn headquartered in Nigeria — is pursuing an IPO. But that information is unconfirmed based on a February 8, Bloomberg story without named sources. Jumia has declined to comment.