Over the past year, we’ve written a lot about the rise of supergiant venture capital funds. Ever since the rollout of the $100 billion SoftBank Vision Fund, established VCs have been outdoing each other to raise ever-bigger funds.

But let’s not write the epitaph on smaller funds. U.S. venture fundraising data for 2019 reveals a lot of smaller, more focused funds closing on capital. Newcomers are rolling out fresh early-stage funds, and even established VCs are opting in many cases to keep fund size constant or even a bit smaller.

The influx of small and mid-sized funds serves as a reminder that supergiant funds are somewhat of an aberration for the venture capital industry. While VCs compete to back massively scalable startups, the common wisdom is the venture capital industry itself does not scale especially well. Adding more capital to the pot, the thinking goes, likely does more to inflate valuations than foster great companies.

Silicon Valley stalwart Kleiner Perkins is among the latest to hop on the smaller-is-better bandwagon. Three weeks ago, the 47-year-old firm closed on $600 million for its eighteenth flagship fund, touting a plan to go “back to the future” and focus on early-stage with the philosophy that “venture is a non-scalable, boutique craft.”

Of course, $600 million is by no means a tiny fund. And Kleiner’s most prominent growth-stage investment partner, Mary Meeker, did just leave to start her own firm. Nonetheless, it is a step down from Kleiner’s last major fundraise in 2016, which brought in $1.4 billion for a growth-stage vehicle and an early-stage fund.

Meanwhile, Crunchbase fundraising data shows plenty of U.S. funds of $200 million or less closing in 2019, as well as several more that are apparently still in fundraising mode. So far, billion-dollar-plus funds are pretty scarce.

Below, we take a look at the venture fund Class of 2019, including newcomers, as well as follow-on funds from established firms. We also focus on rising stars, newer firms that have raised larger new funds.

No matter how many existing venture firms are out chasing startups, there’s always a niche that some newcomer will identify as underserved. So far, 2019 has been no exception.

At least five U.S venture firms have announced closings on their inaugural funds this year.1

Probably the highest profile new entrant this year is from an already well-known Silicon Valley investor, Steve Jurvetson, founder and former managing partner of the 34-year-old VC firm DFJ. Jurvetson closed on $200 million this month for Future Ventures, which will focus on early-stage deals in areas including space exploration, quantum computing, AI and synthetic biology.

Another noteworthy newcomer is Motley Fool Ventures, which is an early-stage, tech-focused venture fund tied to The Motley Fool investment platform. In a twist on the typical VC model of raising capital from large institutional investors, contributors to the $146 million fund are primarily Motley Fool members. 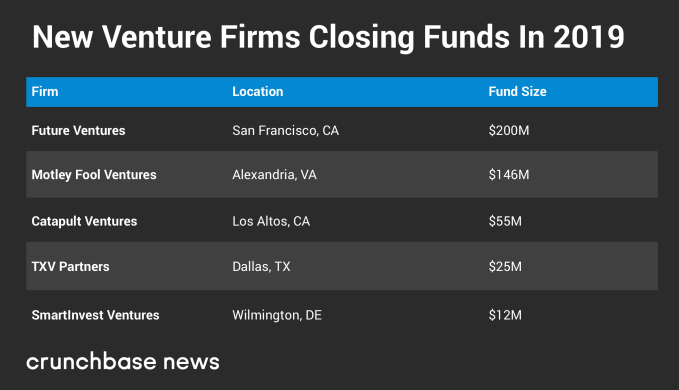 Established VCs have been raising fresh cash, too. So far this year, we haven’t seen a pure-play venture capital firm close a U.S. fund of a billion dollars or more.2 However, we have seen a number of pretty big funds from well-known VCs.

Last week, Menlo Ventures, a longstanding Valley firm that led one of Uber’s early-stage rounds, closed on $500 million for its first Inflection Fund, which will focus on early growth-stage startups.

And on the biotech front, California-based 5AM Ventures proved the early-stage bird can get the follow-on investment, raising $500 million across two new funds. And on the East Coast, Boston-based MPM Capital closed on $400 million for its seventh flagship fund. 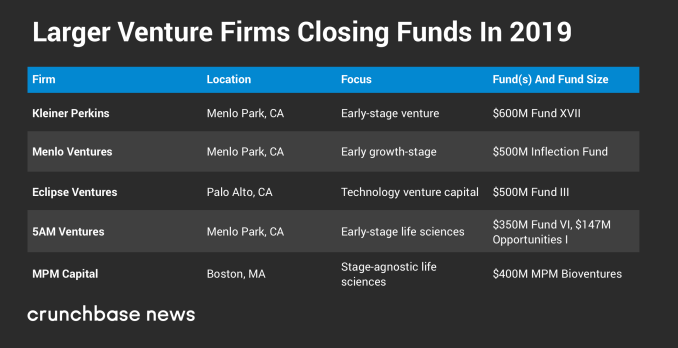 Typically, when we see a firm raising a larger or stable-sized follow-on fund, it indicates a rising star. It usually means that their existing portfolio has seen some successes, and investors are optimistic about future prospects.

Edtech investor Owl Ventures meets this criteria. The five-year-old firm closed on $316 million for its third flagship fund this year. To date, San Francisco-based Owl has invested in at least 24 companies, with a couple of exits and a number of up-rounds under its belt.

Enthusiasm for the cybersecurity space boosted the fortunes of another firm on our rising star list, TenEleven Ventures. The five-year-old, Silicon Valley-based venture firm closed on $200 million for its second early-stage fund this month.

Clearly, not everyone can raise a billion-dollar venture capital fund. And not everyone wants to. For early-stage in particular, the longstanding practice of raising smaller and mid-sized funds is alive and well.

That said, a couple months of fundraising data does not necessarily indicate a long-term trend. We could see a string of billion-dollar-plus funds closing in the next few weeks. Or not.

For now, however, it looks like pressure to become the next SoftBank has ebbed some, with unicorn-chasing giants carving out their niche and smaller funds eyeing other opportunities.

We focused on U.S.-based firms raising funds that make investments in U.S. companies. This does not include, for instance, a Silicon Valley-headquartered firm raising a China-focused fund.

We also did not include Spark Capital, which has submitted securities filings laying out plans to raise a $400 million sixth flagship fund and an $800 million growth-stage fund. The New York and Boston-based firm, known for its early investments in Twitter, Slack, Coinbase and other unicorns, is widely expected to meet or exceed its fundraising goals, but it has not yet officially closed the funds.