Nigerian fintech startup TeamApt has raised $5.5 million in capital in a Series A round led by Quantum Capital Partners.

The Lagos based firm will use the funds to expand its white label digital finance products and pivot to consumer finance with the launch of its AptPay banking app.

The TeamApt founder is open about his company going head to head not only with his former employer, but other Nigerian payment gateway startups.

“Yes, we are in competition with Interswitch,” Eniolorunda said. But he also said that the Nigerian fintech startups Paystack and Flutterwave—both of which facilitate payments for businesses— are competitors as well.

TeamApt, whose name is derivative of aptitude, bootstrapped its way to its Series A by generating revenue project to project working for Nigerian companies, according to CEO Eniolorunda.

“To start, we closed a deal with Computer Warehouse Group to build a payment solution for them and that’s how we started bootstrapping,” he said. A project soon followed for Fidelity Bank Nigeria.

TeamApt now has a developer team of 40 in Lagos, according to Eniolorunda, who spent 6 years at Interswitch as developer and engineer himself, before founding the startup in 2015 .

“The 40 are out of a total staff of about 72 so the firm is a major engineering company. We build all the IP and of course use open source tools,” he said.

On performance, TeamApt claims 26 African bank clients and processes $160 million in monthly transactions, according to company data. Though it does not produce public financial results, TeamApt claimed revenue growth of 4,500 percent over a three year period.

“Our CFO sat with them for about two weeks,” Elaine Delaney said.

TeamApt’s results and the startup’s global value proposition factored into the fund’s decision to serve as sole-investor in the $5.5 million round.

“The problem that they’re solving might be African but the technology is universal. ‘Can it be applied to any other market?’ of course it can,” said Delaney.

Delaney will take a board seat with TeamApt “as a supportive investor,” she said.

TeamApt plans to develop more business and consumer based offerings. “We’re beginning to pilot into much more merchant and consumer facing products where we’re building payment infrastructure to connect these banks to merchants and businesses,” CEO Tosin Eniolorunda said. 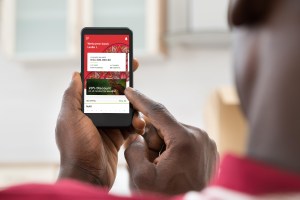 Part of this includes the launch of AptPay, which Eniolorunda describes as “a push payment, payment infrastructure” to “centralize…all services currently used on banking mobile apps.”

The company recently received its license from the Nigerian Central Bank to operate as a payment switch in the country.

On new markets, “Nigeria comes first. But we’re also looking at some parts of Europe. Canada is also hot on list,” said Eniolorunda.  He wouldn’t specific a country but said to look for a TeamApt expansion announcement by fourth quarter 2019.

TeamApt joins several fintech firms in Africa that announced significant rounds, expansion, or partnerships over the last year.  As covered by TechCrunch, in September 2018, Nigeria’s Paga raised $10 million and announced possible expansion in Ethiopia, Asia, and Mexico. Kenyan payment company Cellulant raised $53 million in 2018, targeted to boost its presence across Africa. And in January, Flutterwave partnered with Visa to launch the GetBarter global payment product.

The fintech space has also been the source of speculation regarding the continent’s first tech IPO on a major exchange, including Interswitch’s much anticipated and delayed public offering.

Will Interswitch still be the company that brings Sub-Saharan Africa its big tech windfall?

TeamApt’s CEO is open about the company’s future intent to list. “The project code name for the recent funding was NASDAQ. We’re clear about becoming a public company,” said Eniolorunda.