For the longest time, Arm was basically synonymous with chip designs for smartphones and very low-end devices. But more recently, the company launched solutions for laptops, cars, high-powered IoT devices and even servers. Today, ahead of MWC 2019, the company is officially launching two new products for cloud and edge applications, the Neoverse N1 and E1. Arm unveiled the Neoverse brand a few months ago, but it’s only now that it is taking concrete form with the launch of these new products.

“We’ve always been anticipating that this market is going to shift as we move more towards this world of lots of really smart devices out at the endpoint — moving beyond even just what smartphones are capable of doing,” Drew Henry, Arms’ SVP and GM for Infrastructure, told me in an interview ahead of today’s announcement. “And when you start anticipating that, you realize that those devices out of those endpoints are going to start creating an awful lot of data and need an awful lot of compute to support that.”

To address these two problems, Arm decided to launch two products: one that focuses on compute speed and one that is all about throughput, especially in the context of 5G. 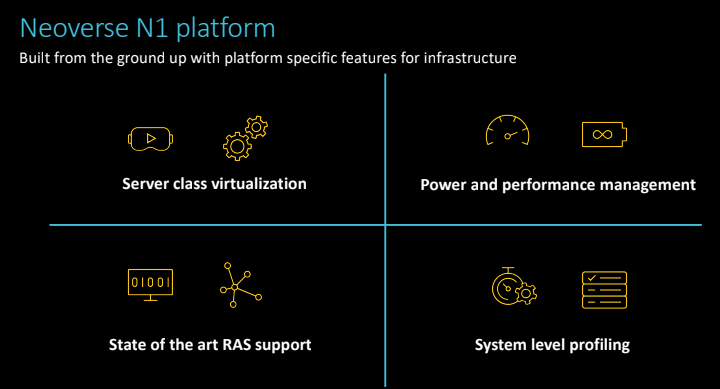 The Neoverse N1 platform is meant for infrastructure-class solutions that focus on raw compute speed. The chips should perform significantly better than previous Arm CPU generations meant for the data center and the company says that it saw speedups of 2.5x for Nginx and MemcacheD, for example. Chip manufacturers can optimize the 7nm platform for their needs, with core counts that can reach up to 128 cores (or as few as 4).

“This technology platform is designed for a lot of compute power that you could either put in the data center or stick out at the edge,” said Henry. “It’s very configurable for our customers so they can design how big or small they want those devices to be.”

The E1 is also a 7nm platform, but with a stronger focus on edge computing use cases where you also need some compute power to maybe filter out data as it is generated, but where the focus is on moving that data quickly and efficiently. “The E1 is very highly efficient in terms of its ability to be able to move data through it while doing the right amount of compute as you move that data through,” explained Henry, who also stressed that the company made the decision to launch these two different platforms based on customer feedback.

There’s no point in launching these platforms without software support, though. A few years ago, that would have been a challenge because few commercial vendors supported their data center products on the Arm architecture. Today, many of the biggest open-source and proprietary projects and distributions run on Arm chips, including Red Hat Enterprise Linux, Ubuntu, Suse, VMware, MySQL, OpenStack, Docker, Microsoft .Net, DOK and OPNFV. “We have lots of support across the space,” said Henry. “And then as you go down to that tier of languages and libraries and compilers, that’s a very large investment area for us at Arm. One of our largest investments in engineering is in software and working with the software communities.”

And as Henry noted, AWS also recently launched its Arm-based servers — and that surely gave the industry a lot more confidence in the platform, given that the biggest cloud supplier is now backing it, too.