One of China’s top smartphone brands Vivo appears to have joined its fellows Oppo, Huawei and Xiaomi in setting up a new sub-brand as a softening market and heightened competition at home drive players to venture upon their original reach.

A new smartphone brand called iQoo made its debut on Weibo, China’s answer to Twitter, on Tuesday by greeting in English: “Hello, this is iQoo.” It also playfully encouraged people to guess how its name is pronounced, as the spelling doesn’t resonate with either Chinese or English speakers. Vivo immediately reposted iQoo’s message, calling iQoo a “new friend.”

Vivo has not further revealed its ties with iQoo, although the latter’s Weibo account is verified under Vivo’s corporate name. TechCrunch has contacted Vivo and will update the story when we have more information. 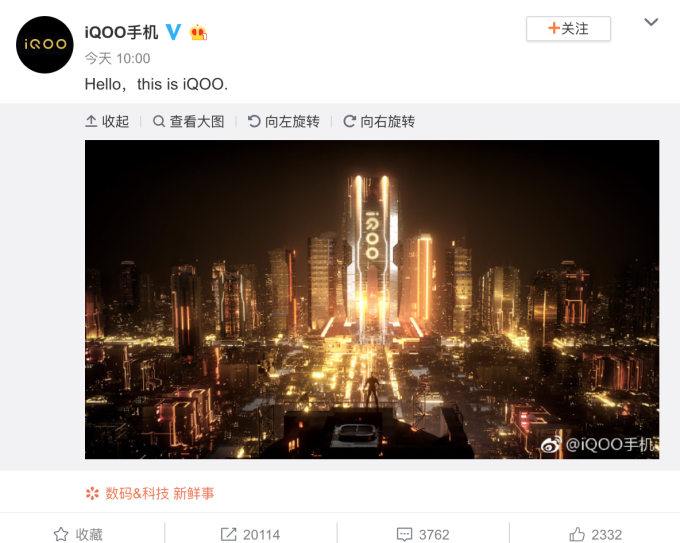 Sub-brands have become a popular tactic for Chinese smartphone makers to lure new demographics without undermining and muddling their existing brand reputation. As the third-ranked player by shipments in 2018 according to research firm Counterpoint, Vivo is the only one in China’s top five smartphone companies without a subsidiary brand.

“Sub-brands can help fill the gap in parent companies,” Counterpoint’s research director James Yan told TechCrunch. “I think iQoo is a brand born for the gaming market, the online sales channel, or young consumers, similar to what Honor did to Huawei.”

Huawei cemented its top spot with solid growth in shipments last year by playing a two-pronged strategy. Its sub-brand Honor has its eyes on the mid-range and Huawei stays at the top end. Vivo’s sibling Oppo, which falls under the same electronics manufacturing outfit BBK, came up with an exclusively online brand Realme in 2018 to go after Xiaomi’s Redmi in India’s burgeoning smartphone market. Xiaomi pressed on by launching Poco for India’s high-tier market. To further solidify its multi-faceted approach, Redmi shed the Xiaomi branding in January to start operating as an independent brand focusing on cost efficiency.

These moves arrived as years of breakneck growth in China’s smartphone space comes to an end. Overall smartphone sales contracted 11 percent in 2018 according to Counterpoint, as users become more pragmatic and less likely to upgrade their handsets. Local players reacted swiftly by going global and introducing headline-grabbing features like Xiaomi’s folding screen and Honor’s pole-punch display, putting a squeeze on global players Apple and Samsung. In 2018, Huawei shored up a 25 percent market share to take the crown. Trailing behind was Oppo, Vivo, Xiaomi and Apple. Samsung plunged 67 percnet to take seventh place.