As eBay gets increasing pressure from activist shareholders like Elliott Management and Starboard to reform its business and turn it into a high-growth tech stock by overhauling its main Marketplace, refreshing management and rethinking its other businesses like StubHub and classifieds, the e-commerce platform delivered a set of Q4 results that were solid if a little lacklustre.

The company today said that for the quarter that ended December 31, it posted revenues of $2.9 billion with non-GAAP net income of $670 million or $0.71 per share. On both counts, it just beat analyst expectations, which were respectively $2.87 billion on EPS of $0.68. But as a sign of the flagging business that activist shareholders have been highlighting, gross merchandise volumes were $24.6 billion, up just one percent on a year ago, even as revenues rose six percent. 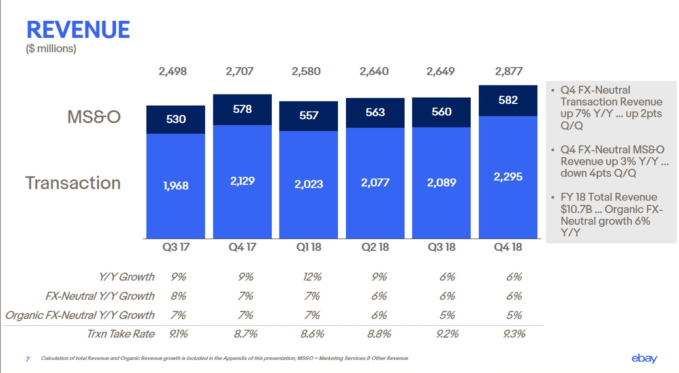 “We delivered record earnings for the fourth quarter and full year 2018,” said Devin Wenig, President and CEO of eBay Inc., in a statement. “In 2019, our focus will be on further improvements to the eBay user experience, while pursuing significant long-term growth opportunities in advertising and payments. We are confident in the strength of our business and future growth prospects, as demonstrated by our decision to institute eBay’s first-ever dividend and increase our share repurchase program.”

Active buyers are up four percent to 179 million, with the Marketplace, its core platform, accountung for $2.3 billion of its revenues, and $23.2 billion of GMV. StubHub, its ticketing business, accounted for $314 million of sales, while classifieds brought in $263 million of revenues.

The company is often compared against Amazon, which started out of the gate around the same time as eBay, but has gone on to diversify into a vast array of business areas and has truly changed the face of commerce as we know it. eBay hasn’t quite had that impact, and arguably its greatest acquisition, of PayPal, was spun off several years ago into its own business, which is thriving (it will report results later this week).

eBay has been trying to diversify its own business in the meantime, in areas such as promoted listings and other services to expand how merchants and buyers can spend on its platform. It said that revenues from promoted listings are up 150 percent across 200 million listings from 600,000 active sellers.

It’s also trying to move into more services around its sales, for example around installation and authentication services for higher-end items such as jewellery.

It also provided some guidance on Q1, where it expects revenues of between $2.55 billion and $2.60 billion, which will be representative of flat to two percent growth on a year ago — one more sign of the kind of sluggish growth that Elliott is pinpointing in its reform plan. Non-GAAP earnings per diluted share from continuing operations in the range of $0.62 – $0.64.

I’m listening to the earnings call and will update this post with any additional points that are notable.