Facebook today announced changes to the way it handles the removal of content from Facebook Pages that’s in violation of the social network’s Community Standards, as well as when the Page has posted items that are rated false by a third-party fact-checking service. It says it will also make it harder for those whose Pages have been shut down for violations to return with new Pages featuring the same, duplicated content by proactively banned other Pages and Groups, in some cases.

To address the first two issues, Facebook says it’s introducing a new tab on Facebook Pages — the “Page Quality” tab — which will inform those who manage the Page which content has been removed for violating standards and what was rated “fake news.”

The section will explain if content was removed for being “hate speech, graphic violence, harassment and bullying, and regulated goods, nudity or sexual activity,” or being “support or praise” of people and events that are not allowed to be on Facebook, the company explained today in a blog post detailing the upcoming changes.

The “people or events” not allowed on Facebook are those associated with real-world harm. This could include people associated with hate groups, terrorist activity, mass or serial murder, human trafficking or organized crime or violence. Facebook also removes any content that expresses praise or support for those involved in such activities.

The tab will also inform Page managers which content may have been demoted by Facebook algorithms, if not removed entirely. This includes content that has been found to be false news by independent fact-checking organizations. Facebook began taking action against clickbait several years ago, then later began to flag and down-rank fake news, as that essentially became the new clickbait.

But those who distributed fake news headlines weren’t necessarily aware that their content’s distribution was being reduced as a result. This tab will now inform them.

However, it won’t actually show those items it deemed “clickbait,” or those that it removed for being spam or due to an IP violation.

In other words, the new Page Quality tab isn’t a full window into everything being removed or down-ranked, only those areas that are today of utmost importance to Facebook to get under control. (Facebook disputes this characterization: “There’s not necessarily a direct connection between what we can currently share in the tab and overall harm/priority,” it tells us. “All of our policies within our Community Standards are important to us in our efforts to keep our community safe.” The company also says that it will add more policy violation types to this area in time.)

“We hope this will give people the information they need to police bad behavior from fellow Page managers, better understand our Community Standards, and, let us know if we’ve made an incorrect decision on content they posted,” the company explained in its announcement. 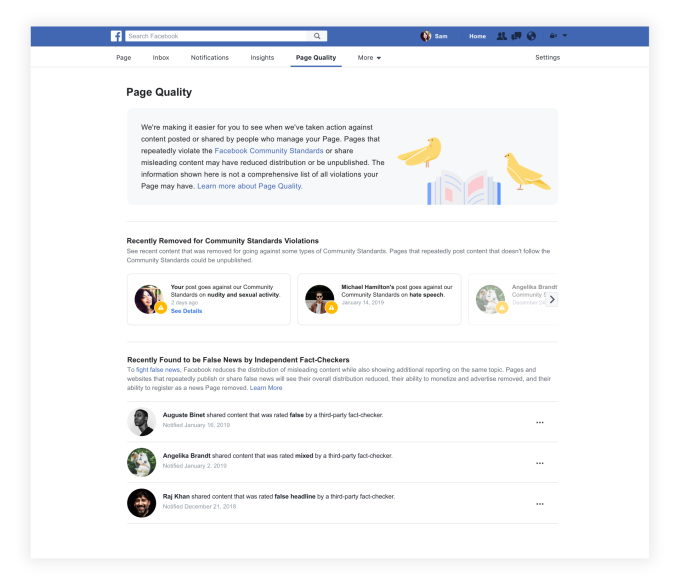 Related to this, Facebook says it’s seen an increase in people using their existing Pages to duplicate the content that had been pulled down from Pages that were banned for violating Facebook’s Community Standards.

While it had policies that prohibited people from creating new Pages (or groups, events, accounts, etc.) for this purpose, it hadn’t been proactively policing the use of existing Pages — and that, effectively, became a loophole for the violators to abuse.

In other words, if Facebook believes the other Pages and Groups will be used as the new home for the content found to be in violation, it will proactively remove them… before they actually do so. (That’s likely to cause some debate.)

Facebook says it will make this determination based on a broad range of factors — like if the other Pages or Groups have the same admins or a use similar name, for example.

The new “Page Quality” tab will launch tomorrow, while the proactive removals will begin in the weeks ahead.