Elliott Management, a NYC investment firm known for its activist streak, released a letter today sent to eBay’s management. The letter put the company on notice that the stock needs to do better, much better. And it outlined a five-step plan, including selling StubHub, it believes can get eBay there.

Elliott is making this request as managers of funds owning more than 4 percent of eBay’s stock. It believes that with some tweaks, the company stock, which sits at $33.71 this morning (up over eight percent) could be worth substantially more. In fact, the company believes if eBay follows its advice it could increase the stock price to $55-$63 per share. 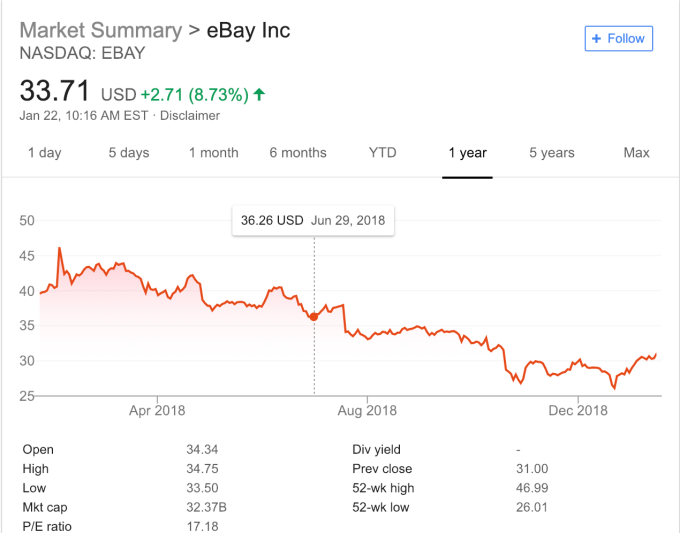 Elliott, which doesn’t tend to be subtle in its assessments of a company’s performance, didn’t pull any punches in its statement regarding the letter to eBay. “Despite its remarkable history as one of the world’s largest e-commerce platforms, eBay as a public-company investment has underperformed both its peers and the market for a prolonged period of time.”

While the letter took great pains to compliment the company, pointing out that it has successfully morphed from an auction marketplace for used goods to a full-fledged e-commerce marketplace in its own right, it was clear that it believed eBay is grossly underperforming.

The firm dug into the issues, as it sees them, in the letter itself. “Over the past five years, eBay’s total return has been more than 100% lower than peers and ~35% to ~65% lower than the technology indices. Moreover, eBay has declined 20% over the past year alone relative to a roughly flat equity market,” Elliott wrote in the letter.

It went on, “Most disappointing, however, is that this significant underperformance has occurred despite strong end-market performance. As the broader internet universe has flourished, especially e-commerce peers, eBay’s stock has floundered.”

The company didn’t just complain though. It outlined a five-step plan to improve the stock. For starters, it wants eBay to look carefully at moving StubHub and eBay’s classified properties and concentrate more fully on the core marketplace, which it believes is the true gem here.

Along those same lines, the company wants eBay to revitalize that marketplace, which it believes has been mishandled badly. “eBay’s Marketplace is a strategically valuable asset that has weathered prolonged, self-inflicted misexecution. Management should turn its singular attention to growing and strengthening Marketplace,” Elliott wrote in the letter.

It also believes the company could improve its operational efficiency. “Today eBay suffers from an inefficient organizational structure, wasteful spend and a misallocation of resources,” Elliott wrote. Next, it wants more capital returned to stockholders and, finally, it needs a management review and greater oversight.

eBay did not respond to an email request for comment on this proposal. If that changes, we will update the article.