Nasdaq’s BVP Emerging Cloud Index measures the performance of a portfolio of 45 SaaS stocks. Like much of the tech world, and the stock market in general, the final quarter of 2018 was not terribly kind. The good news is that there are signs of life.

On November 19th, SaaS stocks had a noteworthy bad day. Everything was down, way down. As we reported, some examples included: 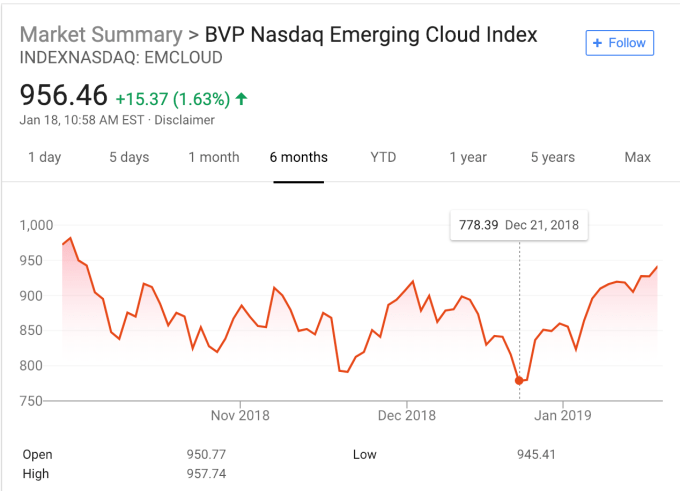 Jason Lemkin, managing director at SaaStr Fund, a firm that works with SaaS founders, says in spite of the last quarter, it wasn’t a terrible year for SaaS stocks. “Cloud stocks still way outperformed the broad market in 2018 — way outperformed. But they are not immune to the broader economy. It just has some insulation to it, due to recurring revenue and also the mission criticality on many B2B apps,” he told TechCrunch.

The day after I wrote the story on this cloud stock debacle, my colleague Jon Shieber looked at the overall tech stock losses, which totaled a staggering $1 trillion in the year-end slide. That’s a ton of lost value, but cloud stocks were taking a hit right along with the rest of tech, even when the future appeared very bright indeed.

Today, the Emerging Cloud Index is showing signs of recovering nicely, and all of that gloom and doom seems to be yesterday’s news. The index has been climbing steadily since that pre-Christmas low (to $956.46 as we went to press). There is no guarantee that will continue, but it certainly makes more sense given that earnings reports have been mostly positive and the market potential is still growing.

As Synergy Research’s John Dinsdale told me in November, “In terms of ongoing market growth and future prospects, absolutely nothing has changed. The market forecasts remain extremely healthy. Indeed, if anything our next forecast update will likely result in us nudging up our forecast growth rates a little.”

Perhaps, the SaaS market did not deserve to be Wall Street’s whipping boy in December, and the recovering index shows that investors have come to their senses where SaaS stocks are concerned.