Weeks after it raised a massive $540 million funding round, Indian education unicorn Byju’s is on the M&A path. The company announced today it has snapped up U.S.-based Osmo, a startup that develops apps for kids that use offline input, in a deal worth $120 million.

Osmo has raised more than $30 million from investors that include Mattel, Sesame Workshop, Upfront Ventures, K9 Ventures and Accel. They were offered a cash option but elected for an all-stock payout, Osmo CEO Pramod Sharma told TechCrunch in an interview. That, he added, is a “validation of the level of confidence” that they have in Osmo combining its resources with Byju’s, which is valued at nearly $4 billion from that recent funding round that featured Naspers, Tencent and others.

Founded by former Googlers Sharma and Jerome Scholler, the Osmo service was launched at TechCrunch’s Startup Battlefield in 2013, when it was initially called Tangible Play. The company combines the benefits of digital and offline learning using a dozen or so apps that tie into customized hardware, that’s a base designed for iPads or Amazon Kindle Fire tables alongside a red reflector and game pieces — as pictured above.

The result is “blended learning” apps that integrate offline activities, varying from drawing to math, spelling and even making pizza, to help children aged between 5 and 12 learn. Currently, Sharma said, it is used in around 20,000 schools and it has reached around a million families, 90 percent of which are in the U.S.

That puts it squarely into the bracket of companies that Byju’s founder Byju Raveendran told TechCrunch his company was seeking to snap up using its newly acquired war chest.

In an interview announcing the fund last month, Raveendran said he wanted “product-based acquisitions that will be value-adds on top of our core product.” 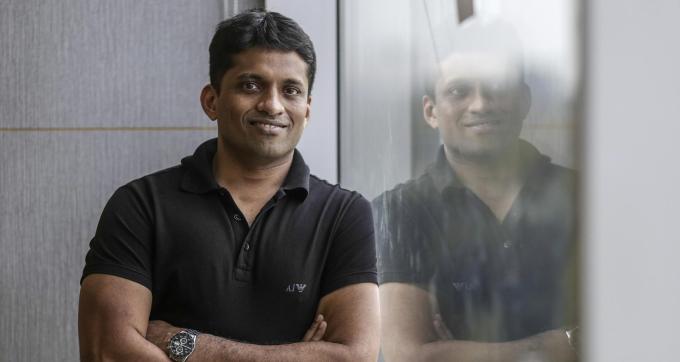 Byju Raveendran founded Byju’s as an offline learning center business in 2008; today it is worth nearly $4 billion thanks to a thriving digital education business with over a million paying customers. Photographer: Dhiraj Singh/Bloomberg

In that respect, Osmo is an ideal complement to Byju’s existing business, which covers educational courses for grades 4-12 using a combination of videos, games and other materials and counts. It currently counts 30 million registered students to date and 1.3 million paying users, with a specific focus on India. But, with its new funding in the bank, it is preparing a new service that will offer a number of courses in English for children aged 3-8 based across the world.

Raveendran and Sharma said the immediate plan post-acquisition will see a huge increase in content for the Osmo platform, while the price of the hardware — which currently ranges from $99-$189 — may also be reduced to help grow the audience beyond its current base.

“For us to grow, we need to invest in content,” Sharma said. “We have a lot of ideas [and] have proven a set of interactions, [but] a lot can be expanded with more content and levels. We’ve proven this is a compelling platform for learning, and we are nowhere close to scaling it… our goal is to get it to every child.” 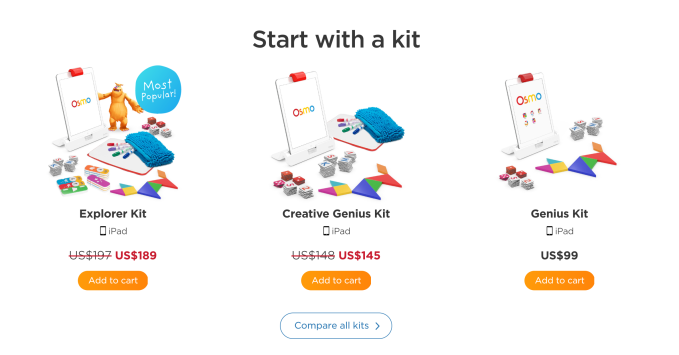 Echoing those comments, Raveendran said Osmo can “reach its maximum potential” with more content, while he stressed that there is plenty of cross-pollination potential between the two companies.

“We’re asking: ‘How can we bring some of the offline learning kids do, is there a way to capture that back onto the app and personalize the learning experiences further?'” he said. “There’s overlap between Osmo users and the products we are building [so] how we can use that for multiple education use scenarios, even possibility for higher grades?”

Ten-year-old Byju’s started out in offline learning before moving into digital courses in 2015. Its push online has seen it do a number of deals; Osmo represents its fourth acquisition. But beyond being its most expensive, Raveendran hailed the acquisition as his company’s “most important” deal to date.

“We have video as a format, games as a format, and we think of Osmo like a format… we could have thousands of supported apps,” he told TechCrunch by phone. “Education is not purely an online experience, especially for younger kids [so] the potential is huge if there’s a clear online-to-offline application.”