The number of U.S. households without a traditional cable or satellite TV subscription that instead receive broadcast stations using a digital antenna has jumped by nearly 50 percent over the past 8 years to reach 16 million homes, according to a new report from Nielsen. Today, 14 percent of all U.S. TV households are watching television over the air, it found.

The measurement firm says there are basically two camps among this group of cord cutters.

One, which tends to consist of older viewers with a median age of 55, exclusively watches TV via their antenna – they don’t subscribe to any streaming service.

This group, totalling 6.6 million homes, tends to be more diverse and have a smaller median income – which makes sense. For them, cord cutting may be more of a cost-saving tool, rather than a way to combine free content with other paid services to create a personalized TV experience. 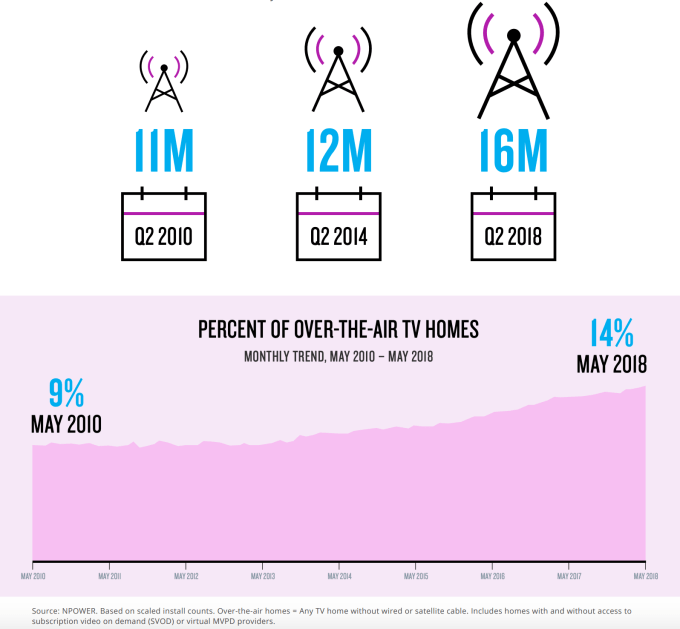 The other group, totalling 9.4 million homes, has at least one subscription video service, like Netflix, Hulu, or Amazon Prime Video, for example. They tend to be younger, with a median age of 36 – as well as more affluent, and more device-connected, says Nielsen.

The group of cord cutters watching over-the-air TV who don’t have access to a subscription video service watches over 6 hours per day. That’s 2 hours more than those with a subscription service, the study found.

The group using subscription services are more active on social media, too, likely as a result of their age and their numerous devices. They spend an hour per day, on average, using social media – 17 minutes more than the group without subscription video. 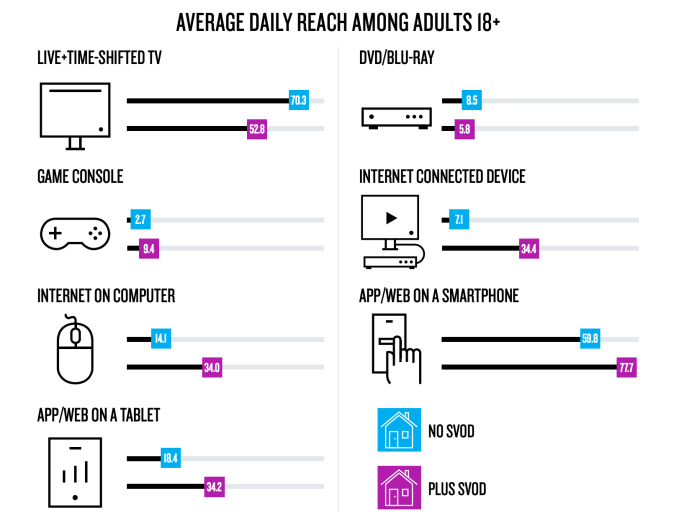 But both groups tend to watch the majority of “TV” content on their television. Despite the increased use of devices like smartphones and tablets, it seems that TV viewing continues to largely take place on the big screen.

Also of note, there’s a small but growing subgroup among the cord cutters who have subscription services who additionally have access to a virtual provider. These are the streaming services offering live TV – like YouTube TV, Hulu with Live TV, PlayStation Vue, or Sling TV. This group has grown to over 1.3 million homes as May 2018, Nielsen claims. (Keep in mind Nielsen’s numbers are counting TV households in the U.S., not individual user accounts to these services.)