Apple stock was down more than 9 percent overnight and continued the downward trend in trading this morning. In fact, the company’s stock price is down a total of 38 percent since October. This, after the company halted trading yesterday afternoon to provide lower guidance for upcoming earnings. As the iPhone upgrade market softened, it was having a big impact on revenue, at least in the short term, and Apple stock took a big hit as a result.

On October 3, the stock was selling at 232.07 per share, and while the price has fluctuated and the market in general has plunged in that time period, the stock has been on a downward trend for the past couple of months and has lost approximately $87 a share since that October high point. 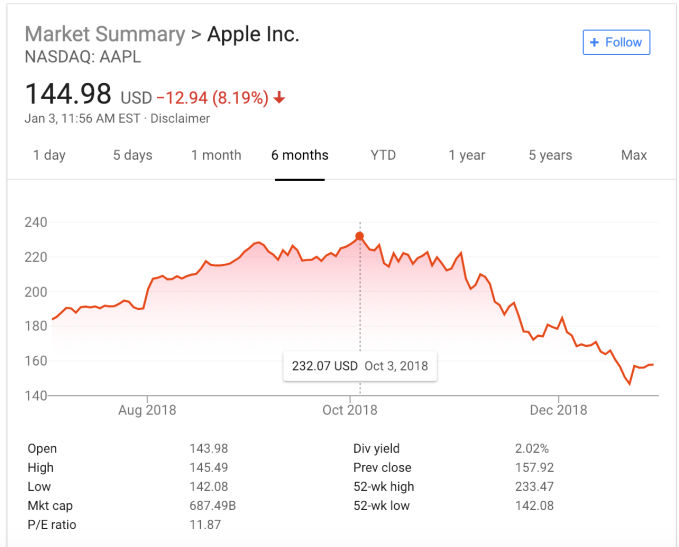 Last night, before the company briefly stopped trading to make its announcement, the stock stood at $157.92 a share. This morning as we went to publication, it was recovering a bit, but was still down 8.19 percent to $144.98.

D.A. Davidson senior analyst Tom Forte says yesterday’s announcement, while not completely unexpected, was surprising, given Apple’s traditionally strong position. “We knew that iPhone unit sales were weak, but just not how weak,” he said.

The biggest factor in yesterday’s announcement, in Forte’s view, was China, where he says the company generates 20 percent of its sales. As the U.S.-China trade war drags on, it’s having an impact on these sales. This could be because of a combination of factors, including a weakening Chinese economy as a result of the trade war, or patriotism on the part of Chinese consumers, who are choosing to buy Chinese brands over of the iPhone.

This also comes at a time when Apple had already indicated that iPhone sales were weak in other worldwide markets, including India, Russia, Brazil and Turkey. This already helped weaken the iPhone sales worldwide, although Forte still sees the Chinese market as the biggest factor in play here.

Forte says that in spite of the soft iPhone performance, the good news is the rest of the product portfolio is up 19 percent, and that could bode well for the future. What’s more, the company has set aside $100 billion for stock buy-back purposes. “They have the balance sheet. They have the stock buy-back program. They still generate very significant free cash flow, and if the individual investor won’t buy the stock, then the company will buy the stock,” he explained.

In a report released this morning, financial analysts Canaccord Genuity believe that in spite of yesterday’s report, the company is still fundamentally sound and they continue to recommend a BUY for Apple stock. “We maintain our belief Apple can expand its leading market share of the premium-tier smartphone market and the iPhone installed base (excluding refurbished iPhones) will exceed 700M in 2018. This impressive installed base should drive iPhone replacement sales and earnings, as well as cash flow generation to fund strong long-term capital returns. We reiterate our BUY rating but decrease our price target to $190 based on our lowered estimates,” the company wrote in a report released this morning.

Forte says the unknown-unknown here is how the U.S.-China trade war plays out, and as long as that situation remains fluid, the company might not recover that income in the near term in spite of stronger sales across the catalog.