Epic Games is having its own Christmas hangover. On Wednesday, a number of Fortnite players reported long queues that time out and problems logging in to Fortnite’s servers. The company is aware of the issue and tweeted that it’s investigating the cause behind the outage that some users are running into when they try to log in.

We are investigating an issue causing some players to encounter a problem with game services and when attempting to log in. https://t.co/3y0X6buriO

We were able to replicate the problem around 1 p.m. Pacific Time, with the game repeatedly throwing us into a queue for around five minutes before timing out. One time, we did successfully log in. When the login failed we were met with the message “Unable to join the Fortnite login queue. Please try again later.” Update: As of 2 p.m. Pacific Time, the queue is stretching closer to 10 minutes. At the end of the queue countdown we are still unable to log in.

Epic has pointed eager holiday players to its status page, where the company reports a “minor service outage” affecting Game Services. The page also notes that Login and Matchmaking are currently experiencing “degraded performance.” TechCrunch has reached out to Epic about the cause of the downtime. 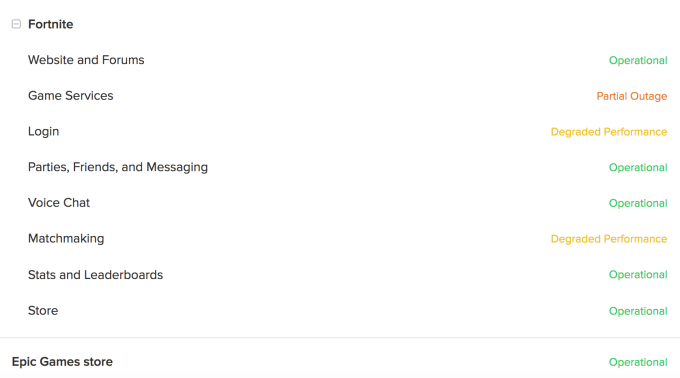 While it’s not quite as catastrophic for an online game as a proper Christmas day outage, the time between Christmas and New Year’s is sure to be a massive week for Epic’s hit game. Given that Epic makes bank charging for cosmetic upgrades through an online store, we’d be curious how much revenue the company loses every minute Fortnite is down during a peak play time. On the other hand, we might rather not know.