HQ’s expansion beyond trivia is emerging from beta, but the question is whether it’s different and accessible enough to revive the startup’s growth. HQ Words opens to everyone today with games at 6:30pm PT within the HQ Trivia app after several weeks of closed beta testing of the Wheel of Fortune-style game. The launch will be the first big move of Rus Yusupov now that he’s been officially renamed CEO a week after the tragic death of fellow co-founder and former CEO Colin Kroll, HQ confirms to TechCrunch. 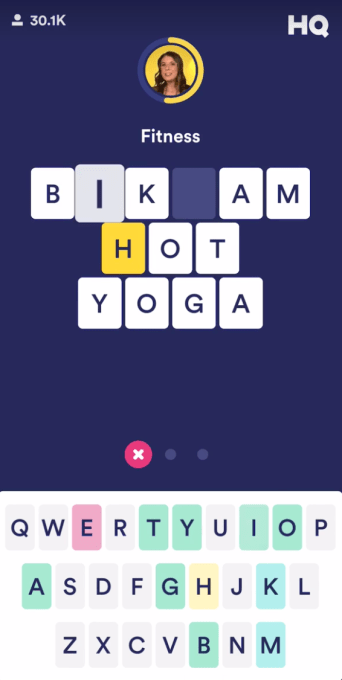 “Intermedia Labs introduced the world to a category-defining product, HQ Trivia. Once again, with HQ Words, Intermedia Labs is poised to captivate the world with a revolutionary experience that will bring people together in new ways around live mobile video,” Yusupov tells us. “HQ Words is the most interactive experience we’ve ever made.”

Kroll’s passing comes at a tough time for HQ. Its daily player count has declined since it became a phenomenon a year ago. The novelty has begun to wear off, and with so many experienced trivia whizzes, cash jackpots are often split between enough people that winners only get a few bucks. Interrupting your days or nights to play at a particular time can be inconvenient compared to the legions of always-available other games. Yusupov, who was HQ’s CEO until Kroll took over in September, will have to figure out what will attract casual crosswords players and those who flocked to Zynga’s Words with Friends — the kind of disruptive thinking Kroll excelled at.

“Colin and I shared many incredible life moments over the last 7 years. We embarked on an incredible journey co-founding two breakthrough companies together – and the lessons we learned at Vine and HQ will continue to have a big impact on me. Like many relationships, we’ve also had our challenges – but it was during these challenging times that Colin’s kind soul and big heart would truly shine,” Yusupov wrote in a statement about his co-founder that was originally published by Digiday in a touching memorial post. Between building Vine and HQ together, the pair have reimagined mobile entertainment, giving millions a chance to show off their wits and creativity. “He had this incredible ability to make everyone feel special. He listened well. He thought deeply. But above all, he cared about people more than work. The driving force behind his innovations was the positive impact they would have on people and world. Colin’s innovations and inventions have changed many people’s lives for the better and will continue to impact the world for years to come.” 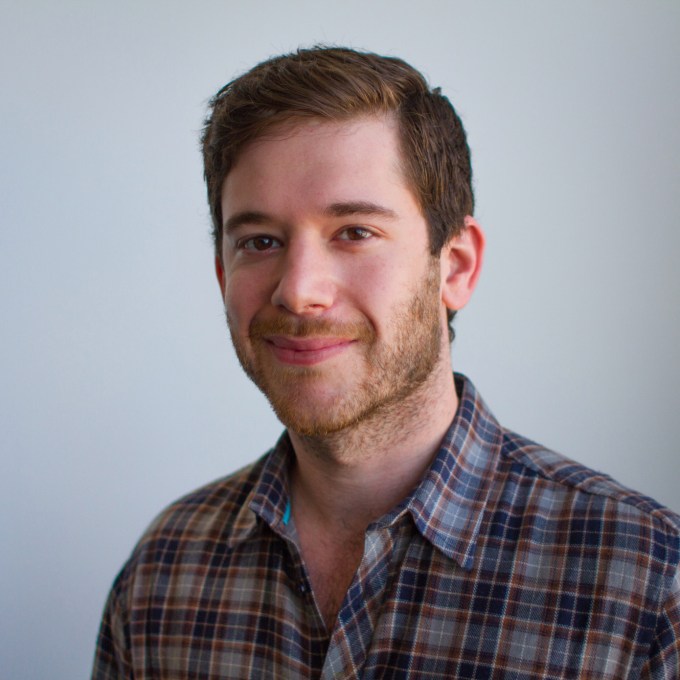 How to play HQ Words

In HQ Words, players compete live to solve word puzzles by correctly choosing which letters are hidden. You can find the game inside the existing HQ Trivia iOS and Android apps. Host Anna Roisman pluckily provides a clue and then dispenses hints as the 25-second timer for each puzzle counts down. If the clue is “gemstone” and you’re shown “_ _ _ m _ _ _”, you’ll have to tap D, I, A, O, and N in any order. Choose three wrong letters or fail to fill out the words and you lose. You’ll spin a wheel before the game starts to get one letter that’s automatically revealed each round.

Make it through 10 rounds and you and other winners get a cut of the cash prize, with the three who solved the puzzles fastest scoring a bigger chunk of the jackpot. The startup earns money through selling you extra lives inside Words, though it will probably feature sponsored games and product placement like Trivia does to pull in marketing dollars. Words will go live daily at 6:30pm Pacific after Trivia’s 6:00 game, so you can turn it into HQ hour with family and friends. 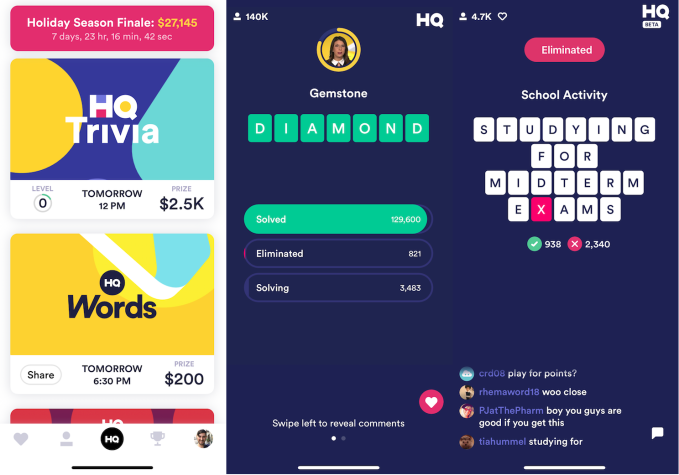 HQ Words is much more frenetic than Trivia. Rather than picking a single answer, you have to rapidly tap letters through a combination of educated and uneducated guesses. That means it really does feel more interactive, since you’re not sitting for minutes with just a sole answer tap to keep you awake. And because it doesn’t require deep and broad trivia knowledge, Words could appeal to a wider audience. The spinner also adds an element of pure luck, as a weaker player who gets to auto-reveal a vowel might fare better than a wiser player who gets stuck with a “Z” like I always seem to.

Fill in the blank

The concern is that at its core, Words is still quite similar to Trivia. They’re both real-time, elimination round-based knowledge games played against everyone for money. Both at times feel like they use cheap tricks to eliminate you. A recent Words puzzle asked you to name a noisy instrument, but the answer wasn’t “kazoo” but “buzzing kazoo” — something I’m not sure anyone has ever formally called it. Given the faster pace of interaction, even tiny glitches or moments of lag can be enough to make you lose a round. An HQ Words beta game earlier this week failed to show some users the keyboard, causing mass elimination. The pressure to get HQ’s engineering working flawlessly has never been higher. 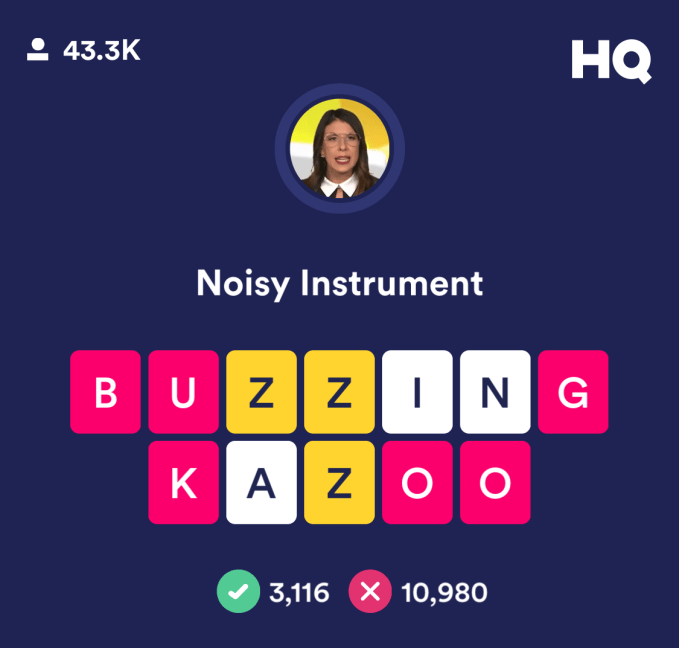 The phrasing of some HQ Words answers seems like a stretch

HQ originally agreed to let TechCrunch interview Kroll about what makes Words different enough to change the startup’s momentum. Yusupov was supposed to fill in after Kroll was sadly found dead last Friday of an apparent drug overdose. He later declined to talk or provide written responses. That’s understandable during this time of mourning and transition. But HQ will still need to build an answer into its app. Meanwhile, Chinese clones and U.S competitors have begun co-opting the live video quiz idea. Facebook has even built a game show platform for content makers to create their own. 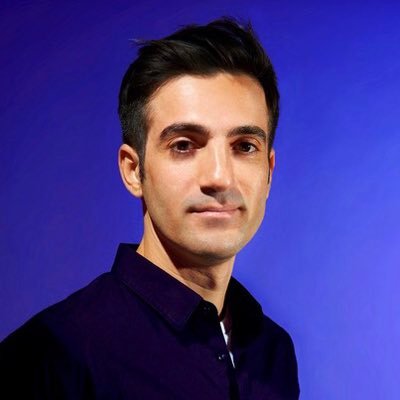 HQ could benefit from a better onboarding experience that lets people play a sample game solo to get them hooked and tide them over until the next scheduled broadcast. Mini-games or ways to play along after you’re eliminated could boost total view time and the value of brand sponsorships. A “quiet mode” that silences the between-round chatter and distills HQ to just the questions and puzzles might make it easier to play while multi-tasking. Head-to-head versions of Trivia and Words might help HQ feel more intimate, and there’s an opportunity to integrate peer-to-peer gambling like ProveIt trivia.  And branching out beyond knowledge games into more social or arcade-style titles would counter the idea that HQ is just for brainiacs.

Around the height of HQ’s popularity it raised a $15 million funding round at a $100 million valuation. That seems justified, given HQ will reportedly earn around $10 million in revenue this year. Gamers are fickle, though, and today’s Fortnite can wind up tomorrow’s  [Update: Draw Something would be a better example] — a flash in the pan that fizzles out. Words is a great bridge to a world outside of Trivia, but HQ must evolve, not just iterate.