If you’ve ever found yourself lugging a big suitcase from meeting to meeting, a startup called Bounce could make your life easier. Using Bounce, you’ll be able to pay for short-term storage at hotels, dry cleaners and other local businesses.

CEO Cody Candee (pictured above with his co-founder and CTO Aleksander Rendtslev) said he’s actually not someone who owns a lot of stuff himself, but he realized that “people are constantly planning their days and planning their lives around the things that they own,” whether that’s running home to drop something off or heading straight to your hotel from the airport because you need to get rid of your luggage.

So Bounce has already signed up more than 100 locations across New York, San Francisco, Washington, DC and Chicago, and it says they’ve been used to store tens of thousands of bags. You currently browse these locations through the Bounce website, but Candee said an iOS app launch is imminent. 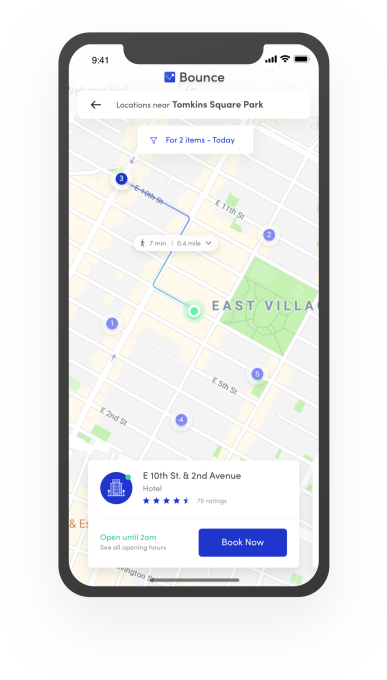 Apparently Bounce vets its locations, partly to ensure that they have secure storage areas and that their posted store hours are accurate — so that you don’t rush to the store to pick something up before closing, only to discover that everyone left early. Candee added that the most common use cases include travelers who have checked out of their hotels, people attending events (I once tried to carry my gym bag into Madison Square Garden and I will never do that again) and salespeople who are hopping from meeting to meeting.

There are other companies that appear to have a similar idea — for example, Vertoe was part of winter class at Techstars NYC — but Candee said that competitors are mostly “attacking just the luggage storage space,” which he suggested is “relatively easy to build.”

In contrast, he said, “The way we see it is, we’re really building a tech platform and basically thinking about these broader use cases.” In fact, he said Bounce is already testing out a system where items are transported by local couriers between different storage locations.

“We’re thinking about what could be built on top of that platform,” Candee said. “A drycleaner could come on our platform and they could basically say, ‘Hey, drop your clothes off’ and then Bounce it back to wherever that user is.”