The app economy is continuing to grow, both in terms of app downloads and consumer spending. According to preliminary year-end data shared by App Annie, it’s predicting the number of global app downloads in 2018 will surpass 113 billion, up 10 percent from last year. Consumer spending in apps has grown even quicker — it’s up 20 percent year-over-year, to surpass $76 billion worldwide.

The app intelligence firm came to these figures by analyzing data across both Apple’s iOS App Store and Google Play, up until December 15, 2018. It doesn’t include the third-party Chinese app stores, which would make the figures even higher.

The rest of this month may see the numbers increase a bit — especially as people unwrap new smartphones over the holidays, then download and buy apps. However, the numbers should still be in the general ballpark. App Annie will release a full “State of Mobile” report in January, after the holidays conclude and the final numbers are crunched.

The firm attributed the continued increase in consumer spending to mobile games, which are the most popular and profitable gaming format, it says.

In 2018, the mobile gaming market matured with hits like Fortnite, PUBG and Roblox taking advantage of more capable specs on smartphones, as well as the trend toward cross-platform gaming. App Annie analysts predict we’ll see more of the same in 2019, as smartphones continue to be capable of supporting more complex, console-quality multiplayer games than in years past.

On the flip side, hyper-casual games did well this year, too — even hitting the year-end top charts both in terms of downloads and consumer spend.

Subscriptions also helped to drive up consumer spend in 2018, with App Annie having already forecast the app stores (including third-party stores in China) will pass $122 billion in 2019, thanks to a combination of gaming and subscriptions driving the growth.

App Annie noted that mobile was sucking up more of people’s time in 2018, as well. 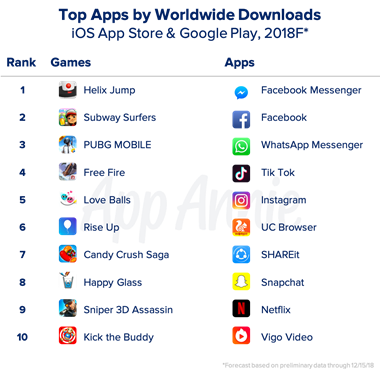 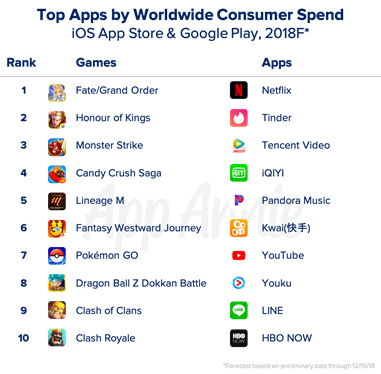