Apple’s mobile payment technology has finally launched in Germany, some four years after it debuted in the U.S.

On its newly launched Apple Pay website for Germany, Apple lists partner banks and credit card companies at launch, with customers from the likes of Deutsche Bank, O2 Banking, N26, Comdirect, HypoVerensbank, Bunq and Boon able to tap up the payment method directly.

Some fifteen banks and services are supported at launch. A further nine banks are slated as adding support in 2019, including DKB, INK and Revolut.

iOS users in the country can now add supported debit or credit cards to Apple Pay to make contactless payments with their device, rather than having to carry cash. Apple’s Face ID and Touch ID biometrics are used to a security layer to the payment system.

The local Apple Pay site also lists a selection of retailers, with Apple writing: “Apple Pay works in supermarkets, boutiques, restaurants, hotels and many other places. You can also use Apple Pay in many apps — and on participating websites with Safari on your Mac, iPhone or iPad.” 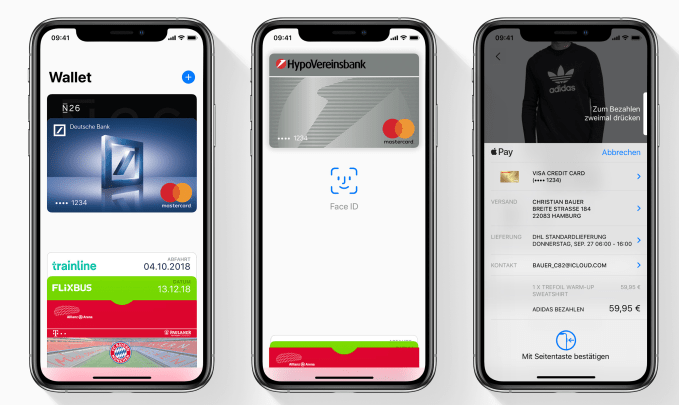 Aside from convenience, the other consumer advantage Apple touts for the system is privacy, with Apple Pay using a device-specific number and unique transaction code — and the user’s actual card numbers never stored on their device or on Apple’s servers — which means trackable card numbers aren’t shared with merchants, so purchases can’t be tied back to the individual.

While that might sound like an abstract concern, a Bloomberg report this summer revealed details of a multi-million deal in which Google pays for transaction data from Mastercard — in order to try to link online ad views with offline purchases in the US.

Facebook has also long been known to buy offline data to supplement the interest signals it collects on users from inside (and outside) its social network — further fleshing out ad-targeting profiles.

So escaping the surveillance net of one flavor of big tech can require buying into another. Or else going low tech and paying in cash.

Apple does not say what took it so long to add Germany to its now pretty long list of Apple Pay countries but Apple Insider suggests the relatively late adoption was down to pushback from local banks over fees, noting that it’s four months after the official announcement of a German launch.

It’s also true that paying by plastic isn’t always an option in Germany, as cash remains the dominant payment method of choice — also, seemingly, for privacy purposes. So Apple Pay is at least aligned with those concerns.