Today at AWS re:Invent in Las Vegas, AWS announced a new service for satellite providers with the launch of AWS Ground Station, the first fully managed ground station as a service.

With this new service, AWS will provide ground antennas through their existing network of worldwide availability zones, as well as data processing services to simplify the entire data retrieval and processing process for satellite companies, or for others who consume the satellite data.

Satellite operators need to get data down from the satellite, process it and then make it available for developers to use in applications. In that regard, it’s not that much different from any IoT device. It just so happens that these are flying around in space.

AWS CEO Andy Jassy pointed out that they hadn’t really considered a service like this until they had customers asking for it. “Customers said that we have so much data in space with so many applications that want to use that data. Why don’t you make it easier,” Jassy said. He said they thought about that and figured they could put their vast worldwide network to bear on the problem.

Prior to this service, companies had to build these base stations themselves to get the data down from the satellites as they passed over the base stations on earth wherever those base stations happened to be. It required that providers buy land and build the hardware, then deal with the data themselves. By offering this as a managed service, it greatly simplifies every aspect of the workflow. 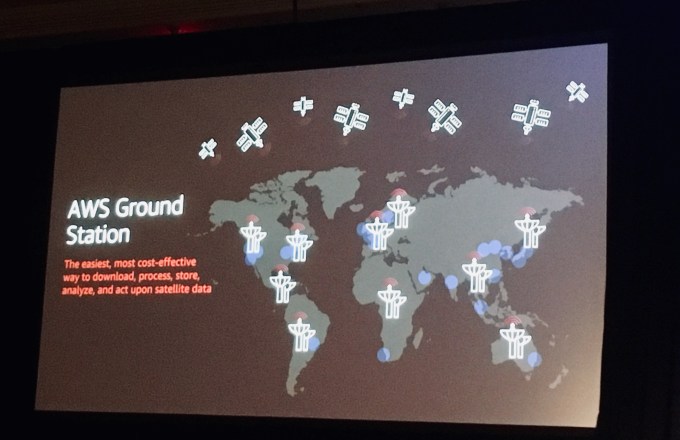 Holger Mueller, an analyst at Constellation Research, says the service will help put the satellite data into the hands of developers faster. “To rule real-world application use cases you need to make maps and real-time spatial data available in an easy-to-consume, real-time and affordable way,” Mueller told TechCrunch. This is precisely the type of data you can get from satellites.

The value proposition of any cloud service has always been about reducing the resource allocation required by a company to achieve a goal. With AWS Ground Station, AWS handles every aspect of the satellite data retrieval and processing operation for the company, greatly reducing the cost and complexity associated with it.

AWS claims it can save up to 80 percent by using an on-demand model over ownership. They are starting with two ground stations today as they launch the service, but plan to expand it to 12 by the middle of next year.

Customers and partners involved in the Ground Station preview included Lockheed Martin, Open Cosmos, HawkEye360 and DigitalGlobe, among others.