Black Friday giveaways have become a tradition for online sneaker marketplace GOAT. Today it’s announcing the details of this year’s campaign, which will be its first to incorporate augmented reality.

Director of Communications Liz Goodno described this as “the largest digital sneaker event of the year.” The company says it will be offering more than 1,000 prizes, including sneakers like the Air Jordan 1 Retro High OG Shattered Backboard, KAWSx Air Jordan 4 Retro Black, Pharrell x BBC x NMD Human Race Trail Heart/Mind, plus curated sneaker packs and up to $10,000 in GOAT credit.

You can enter the drawing anytime between now and 11:59pm Pacific on Thursday, November 22, with the winners notified at noon on Black Friday.

All participants will receive 100 tickets, but you can earn bonus tickets by visiting locations on an interactive GOAT map, which will highlight spots around the world that are tied to all-time great athletes and to sneaker history. Those locations really are global, and they include “Sneaker Street” in Hong Kong, San Francisco’s Moscone Center (where the iPhone debuted) and the location of Muhammad Ali’s historic victory over George Foreman in the Democratic Republic of Congo.

Also on the list are the New York and Los Angeles locations of Flight Club, the famous sneaker retailer that GOAT merged with earlier this year. And you can earn even more tickets by sharing augmented reality graphics that superimpose a “Greatest of All Time” message, or a newspaper highlighting sneaker history, on real-world imagery. 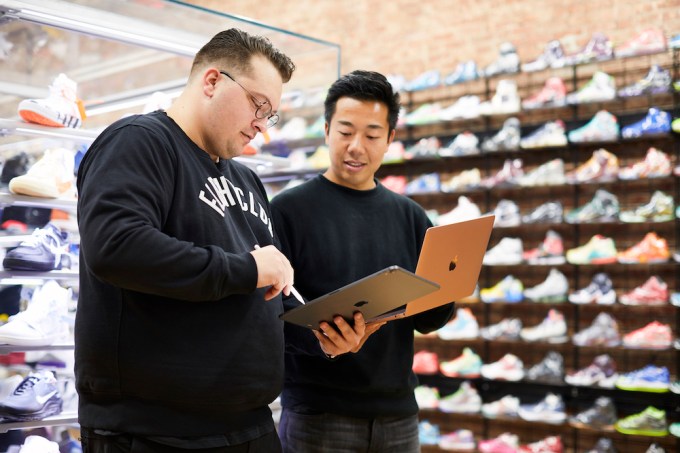 GOAT showed off the AR capabilities at an event with Apple last week at Flight Club New York. The AR elements were built using Apple’s ARKit, and it sounds like the startup plans to do more with the technology in the future.

“We’ve always wanted to incorporate augmented reality technology,” Goodno said, but the challenge, until ARKit, was integrating the technology into the GOAT app. “As a sneaker marketplace there are so many use cases for AR.” (Nike has also been using AR to connect with sneakerheads through its SNKRS app.)

At the event, co-founder and CEO Eddy Lu also talked about the company’s plans beyond AR, saying that “next year, international is a huge thing for us” — which means it’ll be doing more to localize its apps. In addition, it’s getting ready to open its next Flight Club store, this time in Miami.