Tinder has never really shaken its reputation among consumers as a “hook up” app, instead of one designed for more serious dating. Now, it seems Tinder is planning to embrace its status as the default app for younger users who aren’t ready to settle down. According to Match Group CEO Mandy Ginsberg, speaking to investors on its Q3 earnings call this morning, Tinder is preparing to launch its first-ever brand marketing campaign that will promote the “single lifestyle” with billboard campaigns and other digital initiatives.

The move is something of an admission that Tinder isn’t working for helping people find long-term relationships.

“Tinder was such a phenomenon when it launched and spread so quickly that the market defined the brand, versus the business defining the brand,” said Ginsberg, referring to its “hook up app” reputation.

“Tinder’s brand particularly resonated with 18 to 25 year-olds because it provides a fun and easy way to meet people. Tinder sometimes gets a bad rap for being casual,” she then admitted. “But keep in mind that people in the late teens and early 20s are not looking to settle down. It is a time to explore and discover yourself, meeting lots of people and being social.”

Tinder’s new marketing campaign will focus on the “single journey,” the exec said.

The dating app maker has already started publishing content that’s relevant to this “single lifestyle” on its Swipe Life website with stories relating to dating styles, travel, food, and more. For example, some of its recent articles have included things like: “7 Exit Strategies for Terrible Dates,” “Tinder Diaries: Which of these 5 Guys Will Get the Date?,” and “Study Abroad Hookup Confessions.”

Definitely not material for the relationship-minded. 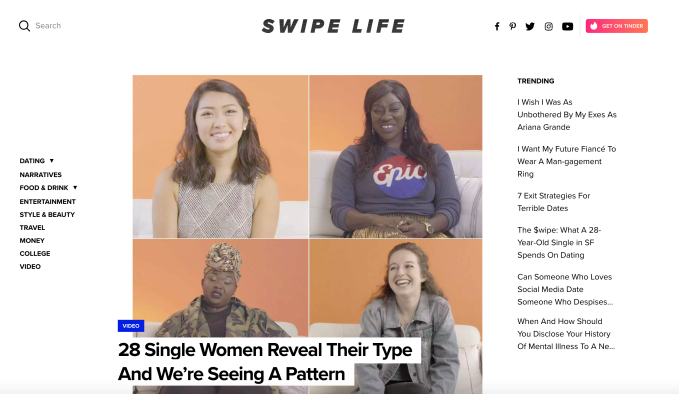 Now, the company will promote Tinder’s “single lifestyle” even further with billboards across major cities throughout the U.S., as well as on digital channels.

The campaign’s goal, explained Ginsberg, is about “further reinforcing how Tinder can enable users to make the most of this fun and adventurous time in their life.”

It’s not difficult to read between the lines here: Tinder’s business model succeeds among people who want to stay single. It succeeds when they’re retained in the app, continually swiping on to the next person they want to meet.

To be fair, Tinder has never really invested in many features that push people to go on dates or exit its app. Instead, it has added addictive features like an in-app news feed – like a social network would have – and tools that enhance in-app chats, like sharing GIFs.

If Tinder was Match’s only dating app, this narrow definition of an app for those embracing their “single lifestyle” would be a problem. 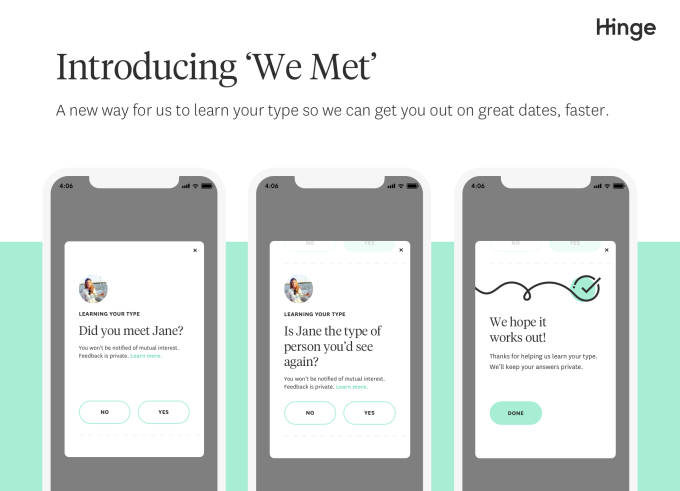 But Match’s strategy has been to diversify its lineup of dating apps. Now it’s a majority owner of dating app Hinge, whose focus has been on helping people get into relationships. In other words, when people are fed up with the ephemeral nature of Tinder, they can just switch apps – while remaining a Match customer, of course!

The company also says it will invest more in Hinge going forward – a move that’s not unrelated to the decisions Match is making around Tinder.

In fact, in another admission that Tinder wasn’t serving those in search of relationships, Ginsberg said Hinge will help the company to address the “previously underserved” audience of 20-somethings looking for a serious relationship.

She speaks of how Hinge’s user interface is clean and simple, and encourages people to be more thoughtful in their initial conversations. It’s a stark contrast to Tinder, which certainly does not.

Hinge downloads have increased five times since Match invested, the company also noted. It’s gaining traction in major cities throughout the U.S, including New York, as well as in international markets, like London.

The plan is to make Hinge the anti-Tinder, then pull in users as they exit Tinder in search of something real. The company said it’s going to increase the marketing spend on Hinge to drive awareness of the app across the U.S.

“We see a real opportunity to invest meaningful dollars in both products and marketing at Hinge to drive long-term growth,” said Ginsberg.

“We think it addresses a great gap in the market,” she continued. “If you think about when Tinder came into the market six years ago, it brought a whole new audience of young users, particularly college-age users. As they start to age…having a product that’s oriented to serious [dating] – but sort of mid-to-late 20s – is really compelling for us,” she added.

Tinder has evolved over the years from casual dating to include those who are more serious. But with Match’s decision to focus on those not looking for lasting relationships, it risks losing some users going forward. The challenge for the company is to pick them up in another dating app it owns, and not lose them to Bumble…or to an exit from dating apps altogether.