Before there was Pokémon GO, there was Ingress. It was Niantic’s first game — and while it never became the overwhelmingly popular phenomenon that GO did, it’s undeniably what allowed GO to exist in the first place.

Now Niantic is taking another swing at it. The company has rebuilt Ingress from the ground up, with the goal of making it prettier, more immersive and — most importantly — more accessible to new players. The new app will ship for iOS and Android later today.

Unfamiliar with Ingress? At its core, it shares its DNA with Pokémon GO; it’s a game that encourages you to walk around the real world, visit nearby landmarks and parks and work together with your self-selected team (or, in Ingress’ terminology, your “faction”).

But Ingress is a good bit more… intense than GO (Ingress players like to poke at GO as being “Ingress Lite.”) There are no cutesie monsters to collect or Pokéstops to spin; instead, you’re “hacking” portals (the same real-world locations, mostly, that act as Pokéstops) and “linking” them together in an effort to conquer as much of the map as you can for your faction. Link three portals and everything in-between becomes your team’s turf. It’s like capture the flag mashed up with one massive worldwide game of tug of war, with a bit of Matrix-y cyberpunk dressing slathered on top.

Ingress Prime, as version 2.0 is known, replaces the original Ingress app with one built on Unity — the same gaming engine that powers Pokémon GO and many thousands of other games. 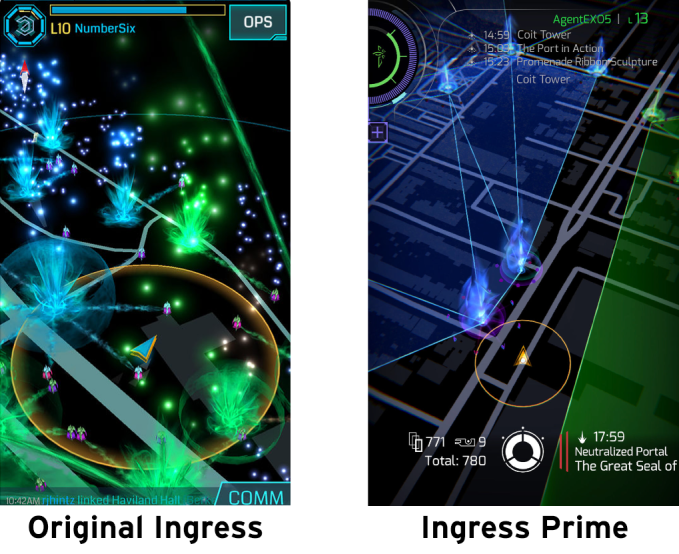 If you’ve been playing Ingress for a while, many of the changes here are “quality of life”-type tweaks: the UI has been cleaned up, and they’ve added all sorts of shortcuts and gestures to make it faster to do things like attack nearby portals or manage your inventory. The new map interface is easier to pan and zoom around with one hand, with a one-finger control scheme that’ll feel pretty familiar for GO players. The new UI is bound to be a point of contention at first, if only because it means a bit of habit breaking for players who’ve spent hundreds to thousands of hours getting used to the old one, and, well, people don’t like change. Hopefully, they come around.

Speaking of those hours spent in Ingress already: Your progress and badges carry over to Ingress Prime. If you’re Level 16 in the original Ingress, you’ll be Level 16 in Ingress Prime. New here, though, is the ability to “recurse.” Sort of like the “prestige” concept made popular by Call of Duty, recursing sets you back to level 1 to start the grind all over again, but with your myriad unlocks (your lifetime AP score, recharge distance and inventory items) still in tow. 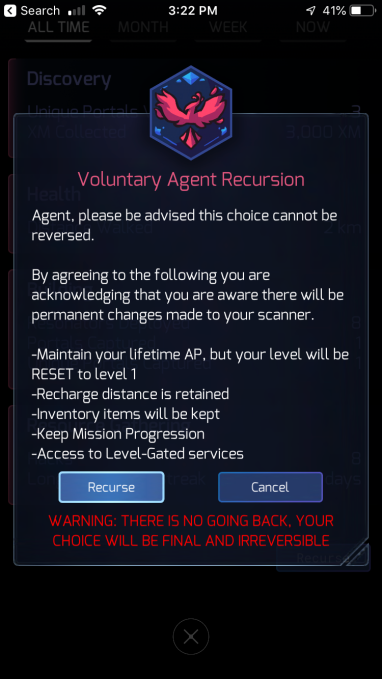 Niantic tells me that certain things moving forward will only be available to those who opt to recurse and start afresh, but didn’t elaborate on what those could be. (With many longtime players approaching Pokémon GO’s level cap of 40, I’d be quite surprised if a similar concept doesn’t make its way into GO eventually.)

It’s the players who are new to Ingress, though — or those who gave Ingress a glance before and were spooked away by the steep learning curve — that Niantic seems most interested in here.

Whereas the original Ingress just sort of dumped you into the thick of it, Ingress Prime offers a bit more handholding out of the gate. A plot-driven tutorial introduces new players to the concepts of portals, hacking, etc., all while starting to plant the seeds of the game’s backstory and lore. You’re introduced to the two factions and the rival AIs behind them, eventually being asked to choose a side.

I ran through a beta build of the game’s onboarding process last week, and, as someone who admittedly fits right into that “gave Ingress a glance and got spooked away” camp mentioned above, Ingress Prime does a much better job of clarifying what the heck is going on. It feels like it could use a bit more play testing (particularly in explaining when I’m doing the wrong thing), but it’s a big step forward. It doesn’t spoon feed you, but it does a much better job of getting the ball rolling.

(Pro tip: The game recommends using headphones, and I don’t think that’s just so you can hear things at the highest fidelity. With the tutorial’s voice-acted tracks talking about hacking systems and controlling minds, anyone playing in public sans earbuds is bound to get some preeeeetty weird looks.)

Once they’ve gotten a new player hooked, Niantic intends to go a bit harder with the aforementioned plot/lore this time around. A weekly live-action web series called the “Dunraven Project” will fill in the game’s backstory, while an anime series (which debuted in Japan in October with an English version coming to Netflix in 2019) is meant to explore the wider universe.

According to Niantic, Pokémon GO was downloaded nearly a billion times. Ingress, meanwhile, capped out at around 20 million downloads.

Will this overhaul get Ingress downloads up into the billions? Probably not. Pokémon GO had that powder keg spark of nostalgia and familiarity to draw in massive crowds right off the bat — but, built on someone else’s intellectual property, there are limitations in what Niantic can do with GO and where GO can… er, go. But by rebooting Ingress, Niantic is using existing IP it already owns/fully controls as a springboard; they’re striving to keep the existing player base happy, while setting it up to grow dramatically by lowering the barrier to entry and expanding the storyline. It’s a tough tightrope act to pull off, but it really seems that they’re starting out on a good foot here.