Twitter is digging one of its most important new features out of its settings and putting it within easy reach. Twitter is now testing with a small number of iOS users a homescreen button that lets you instantly switch from its algorithmic timeline that shows the best tweets first but out of order to the old reverse chronological feed that only shows people you follow — no tweets liked by friends or other randomness.

Sometimes you want to see the latest Tweets, first. We’re testing a way for you to make it easier to switch your timeline between the latest and top Tweets. Starting today, a small number of you will see this test on iOS. pic.twitter.com/7NHLDUjrIv

Twitter had previously buried this option in its settings. In mid-September, it fixed the setting so it would only show a raw reverse chronological feed of tweets by people you follow with nothing extra added, and promised a more easily accessible design for the feature in the future. Now we have our first look at it. A little Twitter sparkle icon in the top opens a menu where you can switch between Top Tweets and Latest Tweets, plus a link to your content settings. It would be even better if it was a one-tap toggle.

Twitter’s VP of Product Kayvon Beykpour tweeted that “We want to make it easier to toggle between seeing the latest tweets the top tweets. So we’re experimenting with making this a top-level switch rather than buried in the settings. Feedback welcome.. what do you think?” 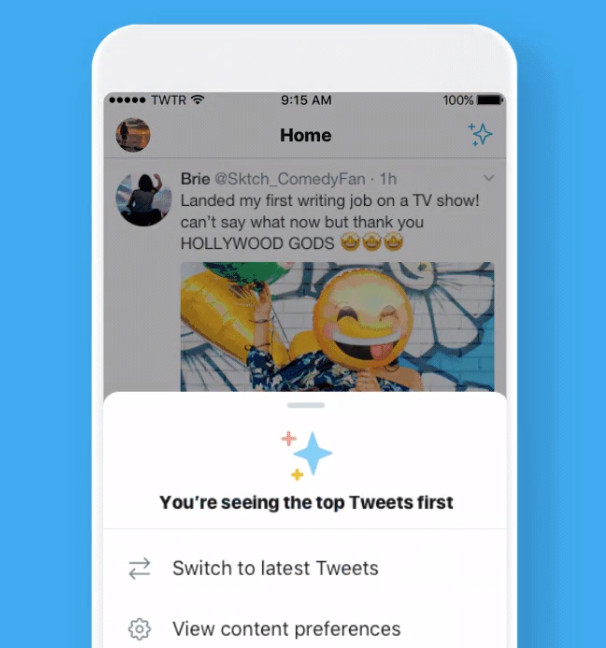 Given the backlash back in 2016 when Twitter started shifting to an algorithmically sorted timeline based on what you engaged with, many users will probably think this is great. Whether you’re trying to follow a sports game, a political debate, breaking news, or are just glued to Twitter and want the ordering to make more sense, there are plenty of reasons you might want to switch to reverse chronological.

Still, Twitter’s apprehension to make the setting too accessible makes sense. Hardcore users might prefer reverse chronological, but for most people who only open Twitter a few times per day or week, that’d mean they’d likely miss the tweets from their closest friends that could be drown out by the noise of everyone else. Twitter’s user growth rate perked up after the shift to algorithmic.

We’ve asked whether the setting reverts to the Top Tweets default when you close the app. That might be frustrating to some expert users, but could prevent novice users from accidentally getting stuck in reverse chronological and not knowing how to switch back. The company tells TechCrunch that it’s trying out several different duration options for the setting based on user inactivity to see what works best. For example, one version will revert the setting to the Top Tweets default if they’re gone for a day. That method would make sure people who’ve been inactive long enough to forget changing their timeline setting will get the default back and not end up stuck in a chronological abyss.

If Twitter gets the reversion to default situation figured out, the new button could make the service much more flexible, thereby boosting usage. You could start algorithmic in the morning or after a weekend away to see what you missed, then quickly toggle to reverse chronological if something big happens or you’ll be on it non-stop all day to get the real-time pulse of the world.