Vimeo announced today a new feature that will allow videos to be published directly to LinkedIn. The added support is a part of the company’s “Publish to Social” feature, which already offers publishing to Facebook, Twitter, and YouTube, and is available to paid subscribers. The expansion to LinkedIn is another example of the company’s shift in focus from being a video destination site to one that sells tools and services to professional and semi-professional video creators.

The company last year scrapped its plans for a subscription video-on-demand service, promoted its creator business lead Anjali Sud to CEO, and acquired live video streaming platform Livestream, as a part of its broader plan to serve the video creator community through services.

Earlier this year, it announced “Publish to Social,” a tool that support uploading videos to multiple sites at once, as a part of all Plus, PRO, Business, and live plans.

Now it’s adding LinkedIn to its list of supported sites, which makes it the first video platform to integrate with LinkedIn, the company says. 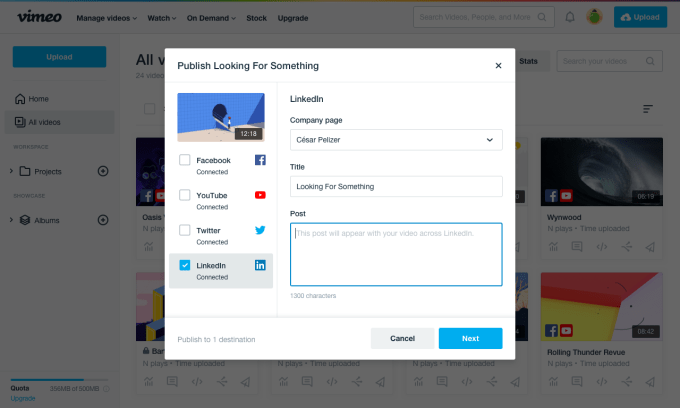 The move also follows Microsoft’s earlier announcement that LinkedIn would open to video uploads as part of a larger video push on its part. Last summer, LinkedIn launched a new feature that allowed users to upload videos to the site from its iOS or Android mobile app – the idea being that users could highlight their work  projects or demonstration products, for example.

With Vimeo’s integration, however, the focus is on uploading to Company Pages, where businesses may be using video in a variety of ways to connect with their customers, prospective employees, and others.

“Video has become one of the key drivers for member engagement on LinkedIn, and businesses who want to start a conversation with their audiences are increasingly turning to Company Page videos,” said Peter Roybal, principal product manager at LinkedIn, in a statement about the partnership with Vimeo. “Our new integration with Vimeo is an exciting step for anyone who wants to gain more exposure, and understand their reach to LinkedIn’s highly-engaged professional audiences,” he added. 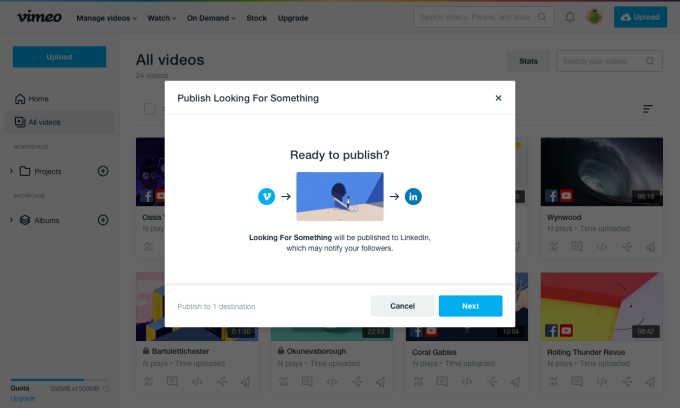 In addition to the ability to publish to LinkedIn, Vimeo will also provide creators with analytics on the videos, including things like video viewership, engagement, and performance stats. These are available on the Vimeo dashboard, alongside the metrics for other social platforms, as well as other websites and blogs, allowing creators to compare their campaigns’ performance across various destinations.

Creators can also take advantage of Vimeo’s other marketing tools from this dashboard to further customize and monetize their content, the company says.

Using video on LinkedIn can be a big boost for businesses. According to LinkedIn’s own data, LinkedIn Company Page videos see 5x the engagement than any other type of post. And because today’s social platforms favor native uploads, the ability to push a video from Vimeo to sites like LinkedIn, Facebook, Twitter and YouTube in that same manner means creators are likely also expanding their reach, rather than using embeds or links.