At least two Twitter accounts linked to the man suspected of sending explosive devices to more than a dozen prominent Democrats were suspended on Friday afternoon.

Cesar Sayoc Jr., 56, was apprehended by federal law enforcement officers in Florida on Friday morning. “Though we’re still analyzing the devices in our laboratory, these are not hoax devices,” FBI Director Christopher Wray said during a press briefing.

Facebook moved fairly quickly to suspend Sayoc’s account on the platform, though two Twitter accounts that appeared to belong to Sayoc remained online and accessible until around 2:30 p.m. Pacific. Both accounts featured numerous tweets, many of which contained far-right political conspiracy theories, graphic images and specific threats.

TechCrunch was able to review the accounts extensively before they were removed. Both known accounts, @hardrockintlet and @hardrock2016, contained many tweets that appeared to threaten violence against perceived political enemies, including Keith Ellison and Joe Biden, an intended recipient of an explosive device. 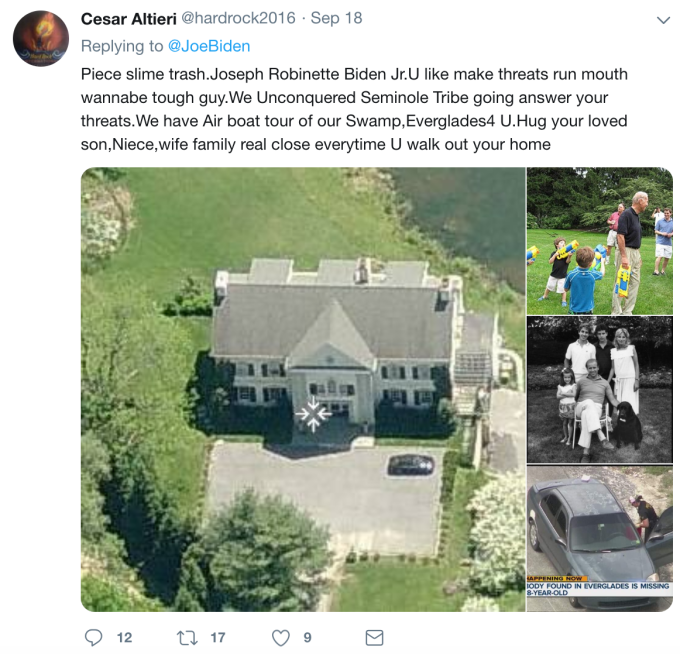 In one case, those threats had been previously reported to Twitter. Democratic commentator Rochelle Ritchie tweeted that she reported a tweet from @hardrock2016 following her appearance on Fox News. According to a screenshot, Twitter received the report and on October 11 responded that it found “no violation of the Twitter rules against abusive behavior.”

Hey @Twitter remember when I reported the guy who was making threats towards me after my appearance on @FoxNews and you guys sent back a bs response about how you didn’t find it that serious. Well guess what it’s the guy who has been sending #bombs to high profile politicians!!!! pic.twitter.com/xBY8FMbqnq

The tweet stated “We will see u 4 sure. Hug your loved ones real close every time you leave home” accompanied by a photo of Ritchie, a screenshot of a news story about a body found in the Everglades and the tarot card representing death.

Update: Twitter issued an apology for not dealing with Ritchie’s initial report.

An update. We made a mistake when Rochelle Ritchie first alerted us to the threat made against her. The Tweet clearly violated our rules and should have been removed. We are deeply sorry for that error.

Between the two accounts linked to Sayoc, many of the threats were depicted with graphic images in sequence. In one tweet on September 18 to former Vice President Joe Biden, the account tweeted images of an air boat, a symbol depicting an hourglass with a scythe and graphic images of a decapitated goat.

Threatening messages that emerge out of a sequence of images would likely be more difficult for machine learning moderation tools to parse, though any human content moderator would have no trouble extracting their meaning. In most cases the threatening images were paired with a verbal threat. At least one archive of a Twitter account linked to Sayoc remains online.

In a statement to TechCrunch, Twitter stated only that “This is an ongoing law enforcement investigation. We do not have a comment.” The company indicated that the accounts were suspended for violating Twitter’s rules, though did not specify which.