Maybe it was her lipstick-applying robot. Or her terrifying vegetable-chopping death machine. Or the robot that tried its best (and failed wonderfully) to feed her breakfast.

Chances are good you’ve seen one of Simone Giertz’s ridiculous creations, be it on the Colbert show or GIF’d into your newsfeed. As the “Queen of Shitty Robots” (her words!), she’s mastered the art of taking an idea for a “useless” machine and transforming it into hilarious, bite-sized, oh-so-shareable internet gold.

Now she’s branching out. Dozens upon dozens of creations later, she’s building something that she hopes is less “useless,” and more “life improving.”

Called The Every Day Calendar, it encourages you to do one thing each and every day by pushing you to maintain a running streak. What that “thing” is, of course, is up to you. Maybe it’s playing guitar. Maybe it’s reading, or jogging, or calling your mom. It doesn’t matter, as long as it’s something you want to do more often than not.

In Simone’s case, the inspiration was practicing yoga — or, more accurately, a bunch of false starts in trying to practice yoga.

“Most of us have a hunch of what we could do to make our lives better, or to make ourselves happier,” she told me earlier this week. “But how do you find the motivation to keep up with it, and to keep yourself accountable? I wanted a physical thing I could see every day. Sometimes when you put so much effort into self-care, it’s like it goes out into a void. But having this progress bar that shows the days you’ve put in, it really helps.”

Could the same thing be done with an app on your phone? Sure. Apps like that exist. But by making it big, and physical, and glowy, it becomes something harder to ignore — something you can’t just swipe away.

Simone’s calendar is sort of like one massive PCB. It’s an array of 365 capacitive touch sensors, each tied to an LED and wired back to a board that keeps track of everything that needs to stay lit. The gold tracing accents of the conductive sensors are pushed forward rather than hidden away, with the whole board then encased in a bamboo frame. It comes together into something that looks homebrew and bespoke, yet modern and pretty enough to fit right into in a lot of rooms. 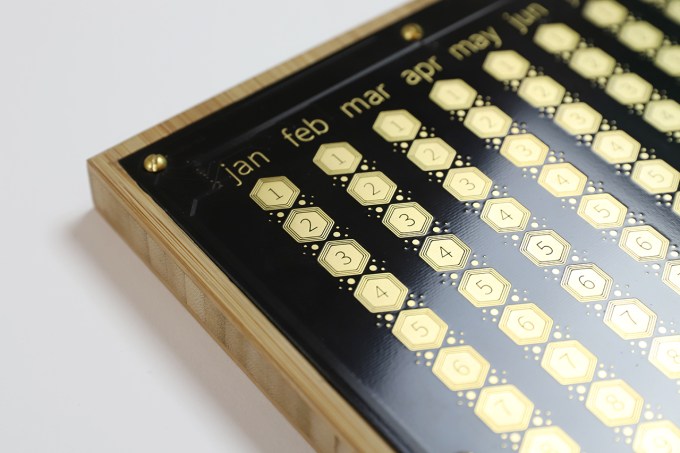 Want the calendar to do something else? There’s a USB programming port on the back. And if you’re feeling super hacky (and don’t mind wiring up a few hundred LEDs on your own), they’re planning to open source the schematics for all to tear into.

Simone started working on this project about a year ago, originally intending to build a one-off board for herself. After a non-malignant brain tumor led her to need brain surgery (and, as she notes with a laugh, caused her to miss a day on her yoga calendar), she focused on making the calendar something that others could have, too.

On building a product for others for the first time, Simone tells us:

“It’s.. crazy. The difference between making one prototype, for something that needs to work once on camera, vs doing something for manufacturing and building at scale. They’re not even related. Or they’re like distant cousins that don’t talk to each other. Fortunately, we have a team that has a ton of experience that helped flesh out the process.”

The calendar goes live on Kickstarter this morning, with a fundraising goal of $35,000. The early-bird first batch will go for $250 each, after which the price bumps up to $300. They expect the calendar to ship by December of next year (or May, for early birds.)

And don’t worry: She’s not done making silly things for the internet. 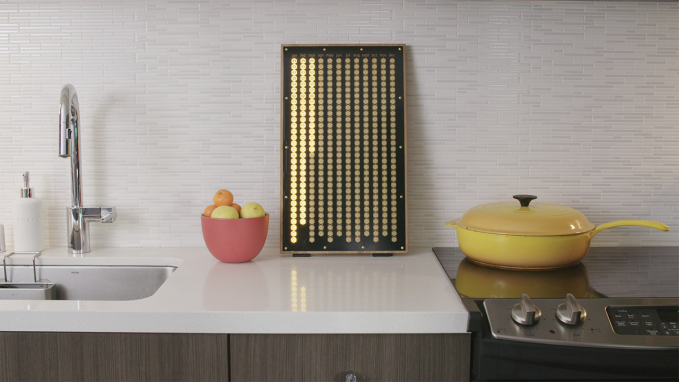