Everyone knows about the space pen. NASA spent millions on R&D to create the ultimate pen that would work in zero gravity and the result was this incredible machine. Well, no. In fact it was made by a pen manufacturer in 1966 — but it wasn’t until October of 1968 that it went into orbit and fulfilled its space pen destiny.

The pen was created by pen maker (naturally) Paul Fisher, who used $1 million of his own money to create the AG-7 anti-gravity pen. As you may or may not know, the innovation was a pressurized ink cartridge and gel ink that would deploy reliably regardless of orientation, temperature or indeed the presence of gravity.

He sent it to NASA, which was of course the only organization reliably worried about making things work in microgravity, and they loved it. In fact, the Russians started using it shortly afterwards, as well.

Walt Cunningham, Wally Schirra and Donn Eisele took the pens aboard with them for the Apollo 7 mission, which launched on October 11, 1968, and they served them well over the next 11 days in orbit. 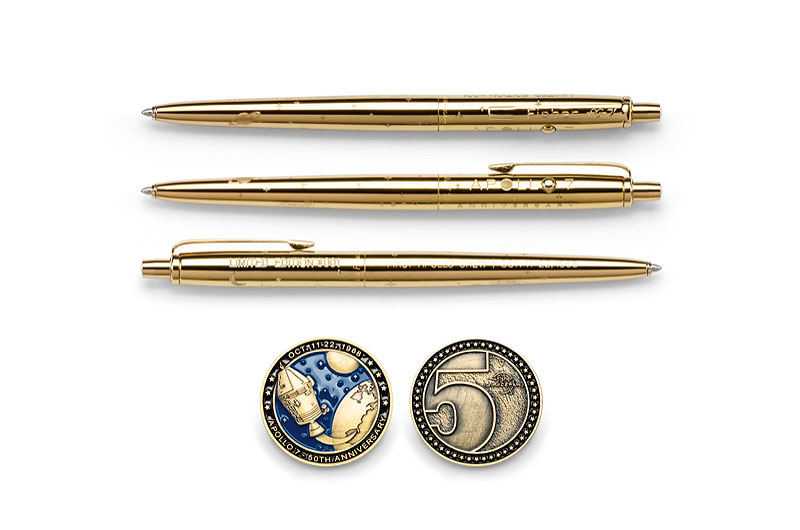 A 50th anniversary edition of the pen is now available to people who have a lot of money and love gold stuff. It’s $500, a limited edition of 500, and made of “gold titanium nitride plated brass,” and it comes with a case and commemorative plaque with a quote from Cunningham:

“Fifty years ago, I flew with the first flown Space Pen on Apollo 7. I relied on it then, and it’s still the only pen I rely on here on Earth.”

Okay, that’s pretty cool. Presumably astronauts get a lifetime supply of these things, though.

Here’s to the Fisher space pen, an example of American ingenuity and simple, reliable good design that’s persisted in use and pop culture for half a century.