In the connected future will anyone truly own any thing? Banksy’s artworld shocker performance piece, earlier this month, when a canvas of his went under the hammer at Sothebys in London, suggests not.

Immediately the Girl with Balloon canvas sold — for a cool ~$1.1M (£860,000) — it proceeded to self-destruct, via a shredder built into the frame, leaving a roomful of designer glasses paired with a lot of shock and awe, before facial muscles twisted afresh as new calculations kicked in.

As we reported at the time, the anonymous artist had spent years planning this particular prank. Yet the stunt immediately inflated the value of the canvas — some suggested by as much as 50% — despite the work itself being half shredded, with just a heart-shaped balloon left in clear view.

The damaged canvas even instantly got a new title: Love Is in the Bin.

Thereby undermining what might otherwise be interpreted as a grand Banksy gesture critiquing the acquisitive, money-loving bent of the art world. After all, street art is his big thing.

However it turns out that the shredder malfunctioned. And had in fact been intended to send the whole canvas into the bin the second after it sold.

Or, at least, so the prankster says — via a ‘director’s cut’ video posted to his YouTube channel yesterday (and given the title: ‘Shred the love’, which is presumably what he wanted the resulting frame-sans-canvas to be called).

“In rehearsals it worked every time…” runs a caption towards the end of the video, before footage of a complete shredding is shown…

The video also appears shows how the canvas was triggered to get to work cutting. 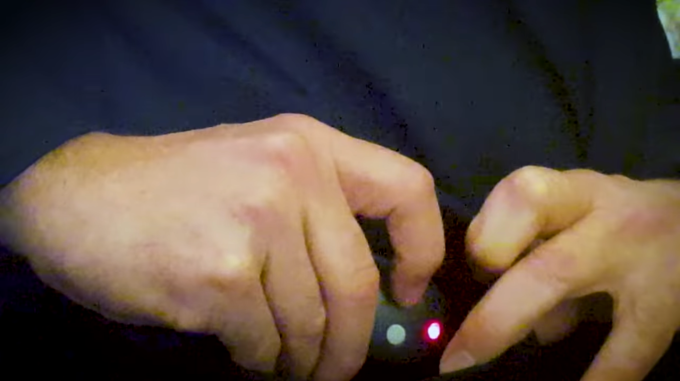 The suggestion, also from the video (which appears to show close up shots of some of the reactions of people in the room watching the shredding taking place in real time), is that the man — possibly Banksy himself — attended the auction in person and waited for the exact moment to manually trigger the self-destruct mechanism.

There are certainly lots of low power, short range radio technologies that could have been used for such a trigger scenario. Although the artwork itself was apparently gifted to its previous owner by Banksy all the way back in 2006. So the built-in shredder, batteries and radio seemingly had to sit waiting for their one-time public use for 12 years. Unless, well, Banksy snuck into the friend’s house to swap out batteries periodically.

Whatever the exact workings of the mechanism underpinning the stunt, the act is of course the point.

It’s almost as if Banksy is trying to warn us that technology is eroding ownership, concentrating power and shifting agents of control.