Facebook is expanding its ban on false and misleading posts that aim to deter citizens from voting in the upcoming midterm elections.

The social media giant is adding two more categories of false information to its existing policy, which it introduced in 2016, in an effort to counter new types of abuse.

Facebook already removes verifiably false posts about the dates, times and locations of polling stations — but will now exclude false posts that wrongly describe methods of voting — such as by phone or text message — as well as posts that aim to exclude portions of the population, such as based on a voter’s age, for example.

But other posts that can’t be immediately verified will be sent to the company’s fact checkers for review. 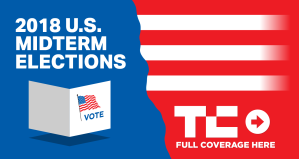 Facebook’s public policy manager Jessica Leinwand said in a blog post announcing the changes that users will also be given a new reporting option to flag false posts.

The expanded policy is part of the company’s ongoing work to counter misleading or maliciously incorrect posts that try to suppress voters from casting their ballot, which could alter the outcome of a political race.

The ban comes into effect with less than a month before the U.S. midterm elections, after facing heavy criticism from lawmakers that Facebook has not done enough to prevent election meddling and misinformation campaigns on its site. Facebook has largely shied away from banning the spread of deliberately false news and information, including about candidates and other political issues, amid concerns that the platform would be accused of stifling free speech and expression.

But the company didn’t have much room to maneuver after a prominent Democratic senator challenged Facebook’s chief operating officer Sheryl Sandberg during a congressional hearing about how the company planned to prevent content that suppresses votes.

During that hearing, Sandberg admitted the company could have done more to prevent the spread of false news on its platform, but argued that U.S. intelligence could have helped.

Wyden said in a statement that it was a “good step,” but that he’ll be looking for results. “We can’t have a repeat of 2016, when scammers micro-targeted lies at people of color to steal their right to vote,” the senator said.