Portal is not Facebook’s Echo Show. Call it a case of convergent evolution, wherein two companies arrived at similar looking products after approaching hardware from different angles. The problem Facebook sought to solve is one of face to face communication. It’s an attempt to remove the device from the act of video chatting.

That Facebook, Amazon and Google’s smart display partners all ended up at a similar place is no coincidence, of course. Like those smart displays, the home teleconferencing device is essentially a propped up tablet. With Portal, however, the system takes two distinct form factors.

There’s the standard Portal, which looks quite a bit like Lenovo’s recently released Google Assistant Smart Display, and the more compelling Portal Plus. That larger model, with a 15 inch display (1920 x 1080) brings to mind recent enterprise attempts at telepresence robotics. The base is stationary here, but the display orientation can be swiveled into landscape or portrait mode. 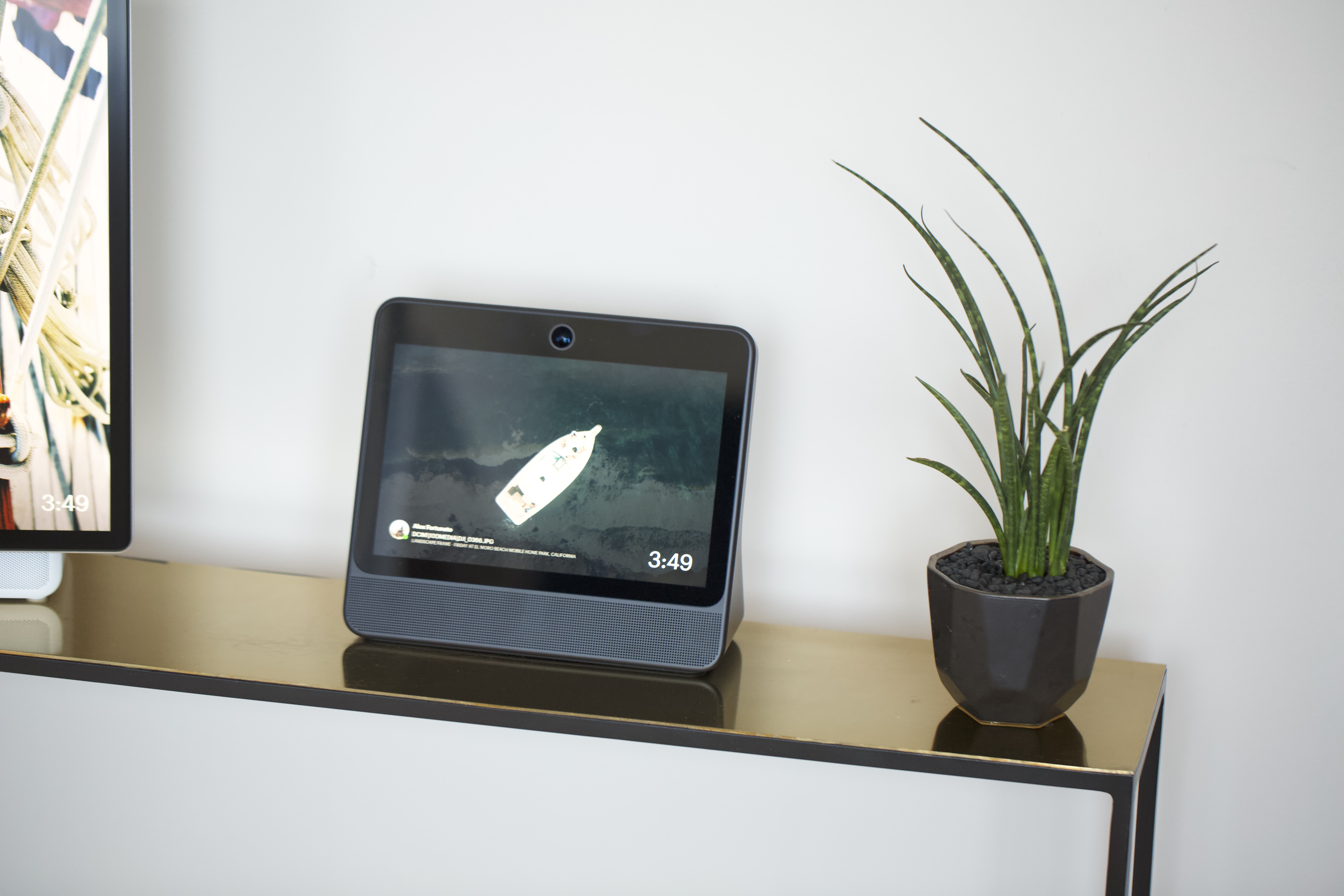 What’s most remarkable, of course, is that this is the first true Facebook-produced piece of consumer electronics. It was never really a question of whether Facebook would create its own hardware — it was more a question of when, and what shape it would take. Unlike feeds, text chats and likes, video is the first real aspect of the company’s social platform that can justify a standalone device.

During a meeting with TechCrunch, the company cited this 2015 piece as an inspiration for the product.  In it, Tim Urban lays out some pretty stark infographics pertaining to his own mortality. The piece also breaks down how much more face-to-face time the writer will ultimately spend with his parents, then in their mid-60s.

It’s kind of a bummer, honestly. Don’t read it on a plane. But here’s the takeaway:

“It turns out that when I graduated from high school, I had already used up 93 percent of my in-person parent time. I’m now enjoying the last 5% of that time. We’re in the tail end.” 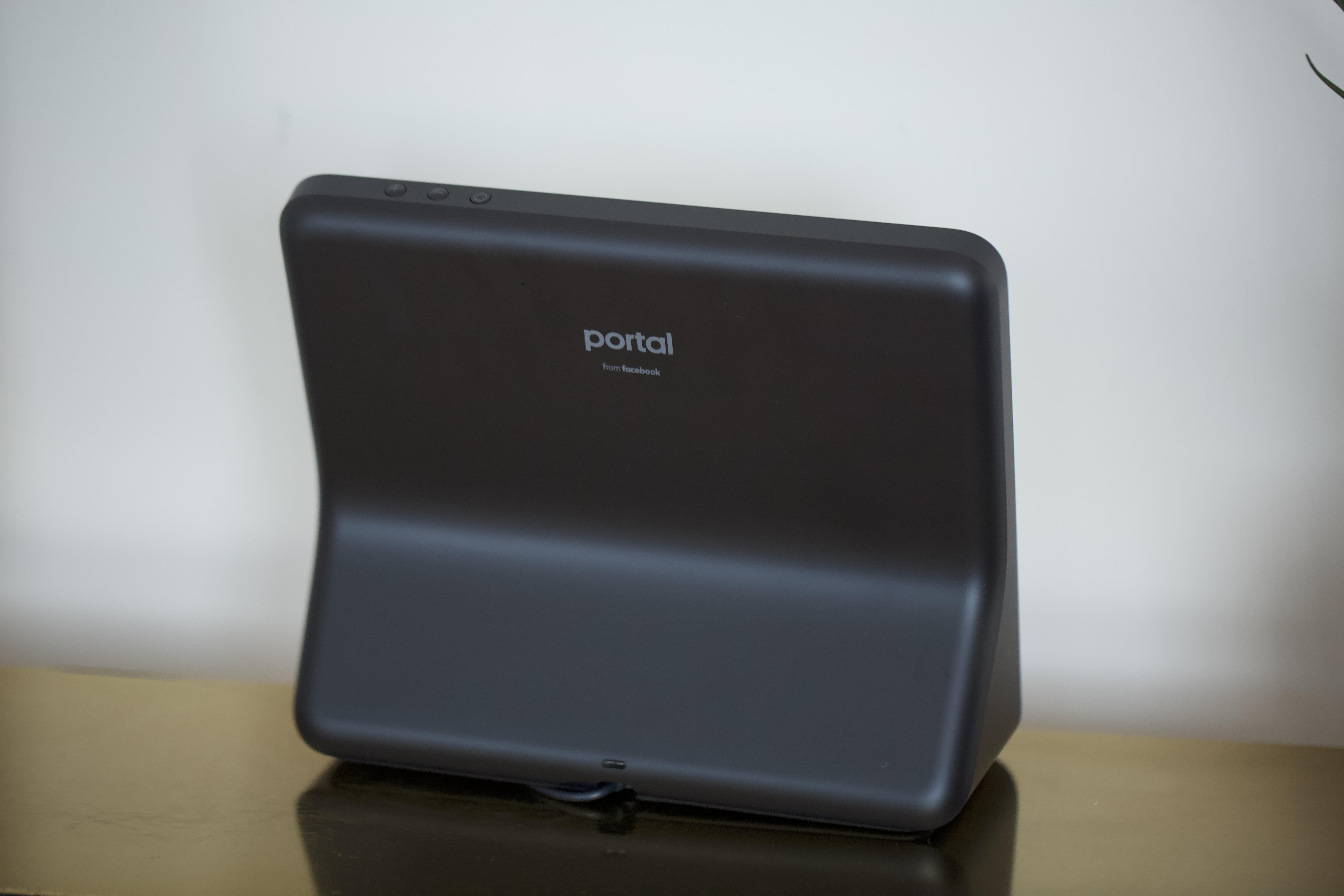 Portal’s creation dates back to the foundation of the hardware team two years ago. The team’s first product manager Rafa Camargo says there was some back and forth regarding whether it made sense for Facebook to finally launch first-party hardware in earnest.

“We spent six months trying to figure out how we expand the platforms Facebook has and toying with the idea of what we can do if we own the whole thing,” the former Googler tells TechCrunch. “Otherwise, what’s the point of hardware?”

The idea initial spark for Portal was struck a year and a half ago, leading Facebook to build out the Building 8 product team. In the intervening months, speculation has ramped up that the company was building either a Facebook Phone or Amazon Echo competitor. The latter, of course, was much closer to the truth (a least for now), though in some ways, Portal and Portal Plus are their own beasts entirely.

Video chat is far and away the focus here — and the implementation in the demos we’ve seen are actually pretty remarkable. In fact, the product is so focused on that singular feature that much of the rest of the product has languished in comparison. 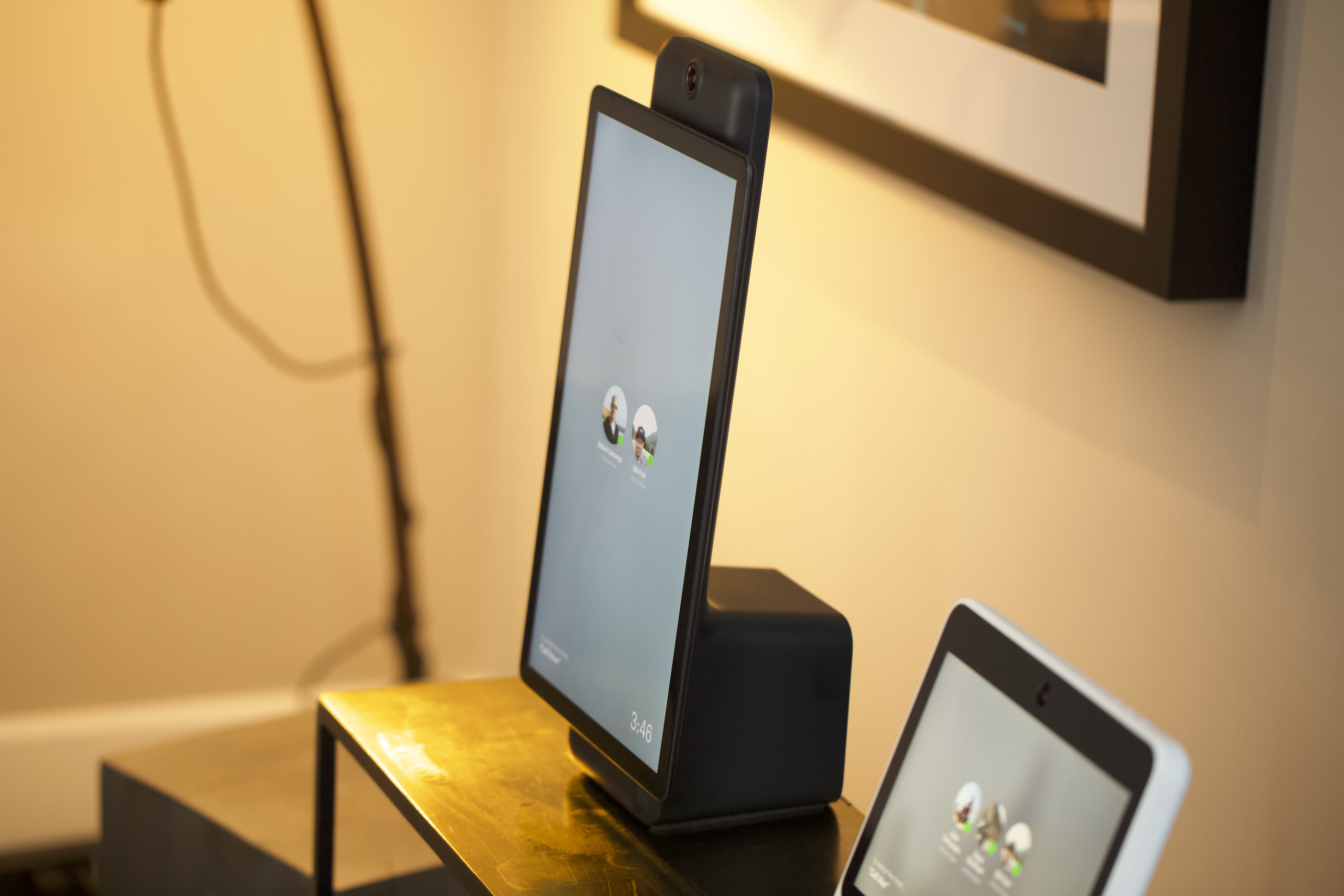 Portal is not going to be the next centerpiece of your next smart home, for example. And the UI is pretty barebones and the app store is utterly lacking. There’s no web browser, and in spite of the large screen, you can’t watch videos through Netflix or Hulu or YouTube.  In fact, ironically, this is one of the few pieces of consumer hardware on the market that won’t let you access your Facebook feed.

Of course, your Facebook account is still the key to logging in. By default (using the assorted array of algorithms), Portal will serve off up half a dozen people as your inner circle of communications. You can always tweak that list, however. Calling is pretty much what we’ve come to expect from these sorts of devices, albeit without the kind of overkill UX touches that many chat apps have.

It’s a full screen video, with a small overlay of what’s happening on your end. What’s most remarkable is the combination of AI and camera tricks that help the product focus on its subject. Portal identifies and tracks people, shifting the camera’s framing accordingly.

Facebook actually worked with a professional cinematographer there, to ensure smother transitions, panning the camera to track and zooming in an out (up to 10x) to fit as many people in frame as possible. The camera movement takes a bit of getting used to, but it’s well done and surprisingly smooth. 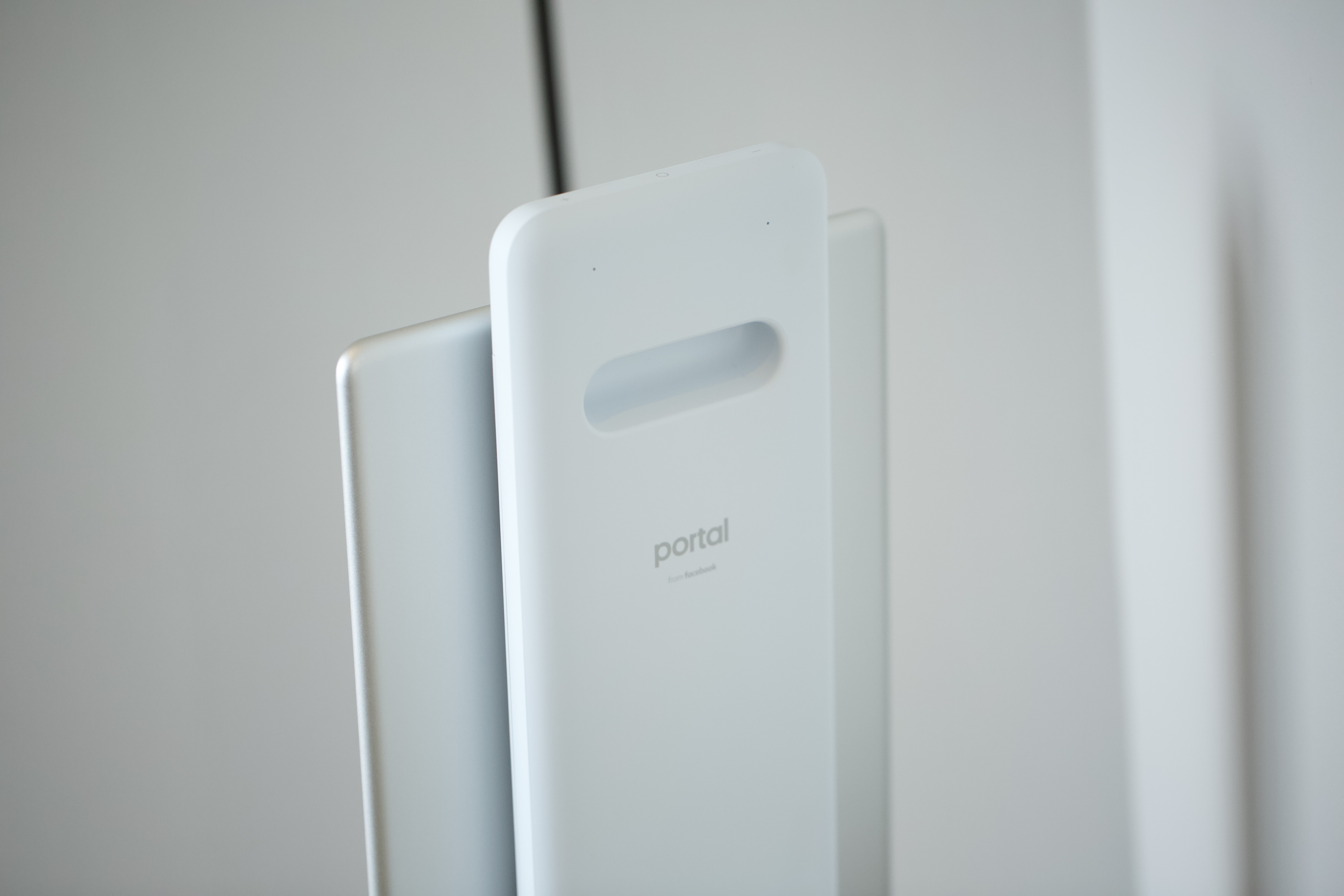 The other big aspect of the video is shared experiences. The simplest is using music apps like Spotify and Pandora to listen to songs simultaneously with someone however far away. While playing, there’s a visual overlay of the song, and the volume can be adjusted on either side of the conversation. There are also some early AR experiences, including Instagram filters and an adorable feature called Storytime, which feeds the narrator the text of a storybook via teleprompter, while overlaying visual aspects from the story.

All of this is very early stages, of course. Facebook has been demoing the device in private trials for roughly nine months with around 1,000 users. Part of that process is soliciting feedback for new features. At launch, the feature set will be fairly barebones, with additions rolling out over time.

The company isn’t disclosing a lot of information from a hardware perspective. The Plus has a 1080p screen, while the standard Portal is 720. There are decent sets of speakers on-board, along with a four mic array, which allows the systems to utilize Alexa for the assistant heavy lifting. 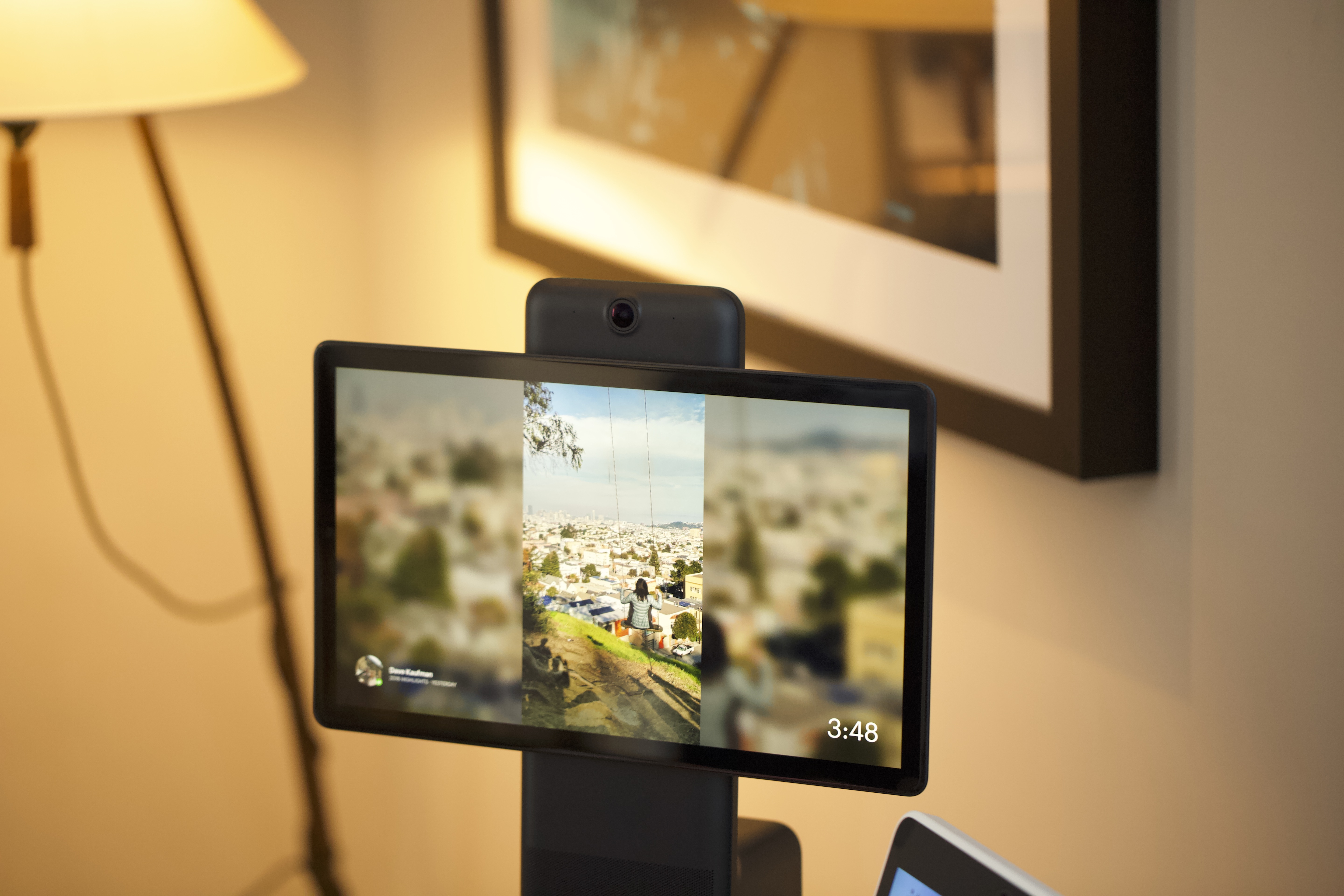 There is some native voice control, including the “Hey Portal” wake word, though interaction with the product is split between that and the touchscreen. There’s also an on-board button to switch off the camera when not in use, along with a lens cap for good measure.

The most surprising thing about the product (beyond its sheer existence) might actually be its price. The larger model runs $349 and the smaller is $199, putting it $20 below the Echo Show. There’s also a bundle that will get you two portals for $299. The device is clearly something of a loss leader for Facebook as the company explores hardware as an avenue for further engaging users.