Farewell, Yahoo Messenger. Hello, Yahoo Together? Yep, Yahoo is returning to the messaging space today after closing its older app due to lack of use. Designed for group chats between family, friends, clubs and others, Yahoo Together tries to differentiate itself from others through its ability to organize group conversations into separate topics, similar to the IRC model, and its ability to send smart reminders about upcoming events.

The app, previously codenamed Squirrel while in beta, was built by the Communications Team at Yahoo – the same folks who previously worked on Yahoo Messenger. However, Yahoo Together was built on a new messaging platform, we understand, though it still leverages some existing technology from Yahoo Messenger.

While much of what the app offers – the ability to chat, share photos, GIFs, links, and reactions – isn’t unique to the messaging space, Yahoo hopes people will appreciate the organizational capabilities in Yahoo Together. 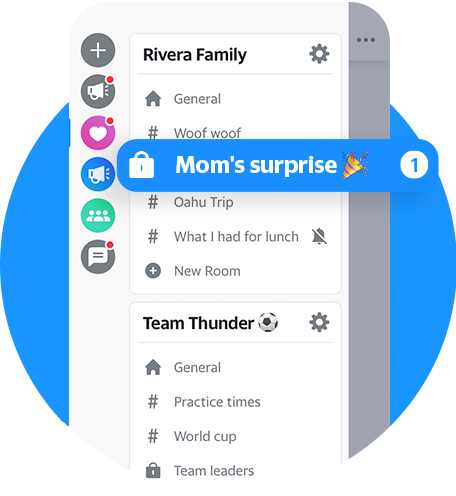 “In many apps, you have a set of people, and then a single thread,” explains Michael Albers, Oath VP and Head of Communications Products. (Oath also owns TechCrunch, but we were not given access to the beta version for testing, we should note. Corporate synergies, hooray!)

“What’s unique to Yahoo Together is that it allows you to create long running groups, but create an infinite amount of separate topics to organize conversations, and where helpful, limit access to some of those topics to a subset of the group,” he says.

This, along with support for file attachments and a more robust search interface than Messenger, makes Yahoo Together feel more like a hybrid of consumer group chat and a tool that could fit more into the productivity space, like Skype or Slack. But unlike Skype or Slack, it doesn’t have support for calls, and the topic-based chats aren’t designed the same way.

It does use the hash symbol for its side conversations, which people may recognize from Slack. But the pound sign was actually adopted for use within IRC networks decades ago to label channels, and Yahoo credits IRC for the idea, in this case. 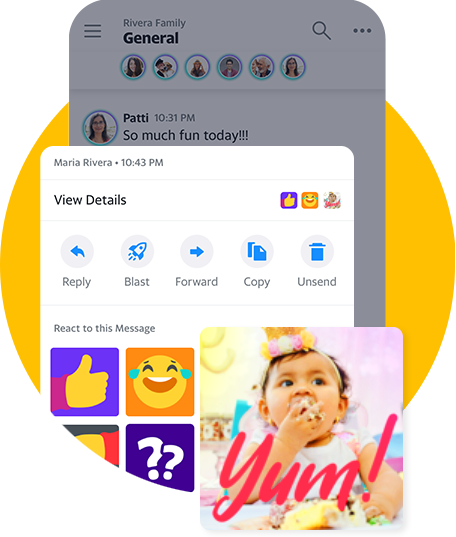 These topic-based chats aren’t just new chat rooms you set up by adding people you know from your contacts, but rather function as subsets to a main group chat.

You don’t have to add everyone from the main group chat to the topic-based sidechat, either. This makes it easier for people to keep up with just the conversations they need to be involved in – like a surprise party for mom or dad, or those they care about – like a sports team’s practice schedule – as opposed to scrolling through long message threads.

During the beta, Albers says Yahoo Together saw five times the number of messages per day, compared with Yahoo Messenger, which the team felt was a promising metric.

Following today’s launch, the team plans to roll out more features as the app continues to evolve.

“Our focus is to create the best product for our audiences and the opportunity with consumer productivity in a group messaging context,” says Albers. “We believe this is where this app sets us apart from others in the space, by focusing on the consumer needs to engage with their communities,” he adds.

It’s unclear how much attention Yahoo Together will receive, as Yahoo previously experimented with a group money pool app, Tanda, which was shut down only months after launch. It’s also very difficult to break into the messaging space today, in a market that’s dominated by major apps like Messenger, WhatsApp, WeChat, Line, and others.

Yahoo also didn’t clarify its user acquisition strategy, when asked, beyond touting the app’s feature set as how it plans to grow its user base. It’s not clear, then, if Yahoo will target user acquisition in emerging markets like India, or if it’s hoping to actually grow a base here in the U.S.

The app is live today on iOS and Android in global markets.